Roadtrip and the Revial of an Army 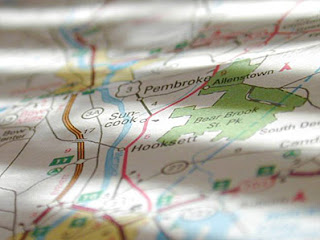 Hello everyone, hope you are doing well. I can't say I've had much to write about recently, but I've got some news I hope you'll like.

As you may or may not know, my interest in 40k has been waning recently because of the 6th edition rumors that were floating around the net. Before I let the new sisters make you feel worse, I'd like to say that my attitude has been very much too serious regarding our game. Like a lot of us in the Muncie area, I've been looking into Warmachine and built a list.

I don't know if I would want to build my list, but I do know that it is friggin cool. Everyone in the army does electrical damage, that is my army shoots LIGHTNING! That is really cool to me. I know that if I ran into someone whose army was immune to electricity I would be screwed, but it struck me as a really fun army to play despite that weakness.

Right now I'm taking part in a seminar at Wake Forest. For those of you that don't know I hate flying, so I drove here. I had a good time during my ten-hour drive and started out listening to one of my favorite podcasts: The History of Rome (I would highly recommend it). Despite my enjoyment of the show, eventually I had to change it up a bit and decided to start listening to the most recent of another podcast, The 11th Company, and heard an interview they did with LKHero about his Salamanders army. that interview made me want to take a second look at my own.

So I thought about what models I had left, as I sold part of my motorpool to Ishmael for his army. I realized that I don't really have much left as far as ground vehicles, but I do have some really nice drop pods. While I know the list I'll put down isn't going to be optimal and could be done better with other codices, but like that Warmachine army, it's more about being cool than necessarily being good. And it's cheap to boot!

I would only need to buy missile bits, a drop pod and proxy my crusader as a redeemer for a while. Basic plan is to send the dreads in first, then just send everything at the enemy. It may lose a good bit of the time but all I can picture is Vulcan jumping out of a pod or the redeemer yelling "Their defenses are broken! Let the slaughter begin!" So that's my fun list that might just be better, to keep me enjoying the game than the optimal. 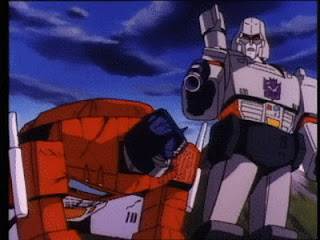 I would have waited an eternity for this. It's over, Prime.
Posted by Heretic at 2:58 PM No comments:

How Fine is Finecast?

Hello everyone. Today I wanted to talk about Citadel's new line of Finecast minis. As we are well aware, the new models use resin, replacing the pewter models of old. While at first I was celebrating GW for their perceived step forward... I have had to stop and really ponder their actions after a few looks into these new models. 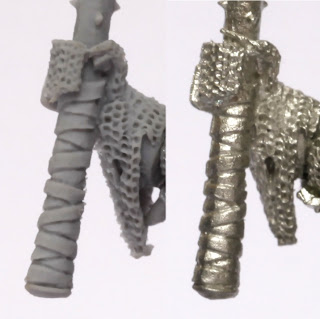 Now, this isn't completely a rant on how terrible things are or another angry post concerning GW's market strategies, so there is some good. The one major benefit to come from this change is the heightened detail this new material brings to the model ranges. Take for example this comparison. A fantasy (yes I know it's square based, but it was the best comparison I could find) Chaos Lord. Look at the difference in detain in the chain mail as well as the leather straps on the weapon handle. This is the type of stuff I really love to see when new models from Forgeworld come out; it brings a tear to my eye when I see the crisp details brought out.

Another little benefit that comes from the new resin models is the weight. It's obvious that weight can be a pretty big factor when looking at keeping models upright, especially when terrain is involved. Perhaps no box set in the new Finecast line appreciates this more than that of the Chaos Raptors. Not only does it help keep them stable, but the new material comes into play with my next point of goodies.

Conversion is a breeze (relatively speaking) in comparison with that of the old metal versions. All of the models in the line are much more easily changed to fit more unique tastes these days. My big example here is the Hive Tyrant. What was once a huge chunk of flashed metal, is now resin.

Now there are the inevitable downsides to the use of resin. The first being the molding process. While the flash is much easier to remove, there is a lot more of it on the models. It can be annoying to prime a model you have cleaned, only to find a few bits of hidden flash here and there that still cling to the model just to ruin your day. 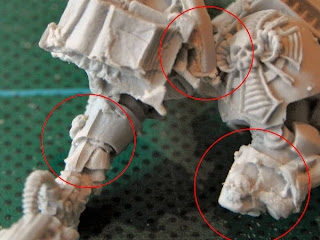 The other issue is fragility in the molding process. Sometimes the resin does not fill completely, breaks, or has air pockets that pock and ruin the models. After looking at some of the models being shipped out... I have to wonder if GW takes the time to really do a quality control check. Take a look at this portion of a model. This goes beyond the "minor fixes required" that GW mentions, and frankly for the price they ask for these minis is rather insulting. 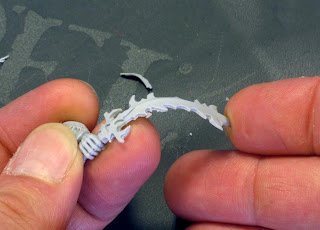 But perhaps the biggest issue I take with the new Finecast minis is the problem with heat. Now, as a gamer who has to travel from one place to another to attend events, it is a given that my models must travel with me. The issue here is that the new resin that GW uses is cheap, and will actually bend and melt with very little heat. Even leaving the model in the sun on a cool summer day will cause bits of it to sag and bend. This sword from Skulltaker is a prime example of the effects of heat wear and tear.

All in all, I am glad to see GW is taking steps to update their line up. I have always been a huge fan of the use of resin in today's gaming circles. The detail they can achieve with this material is unbelievable, and the material itself it much easier to work with as a hobbyist. However, if GW can't get the issues with this material under control soon... they might find themselves without a player base to serve soon. With the popularity of Warmachine on the rise (especially around our neck of the woods) GW can't really afford many more of these foul-ups.

I open the floor to you the readers. I welcome any personal experiences or feelings towards Finecast, and how it may effect your experience in 40k.

As per usual, Scibor Monster mini's is at it again. Here's a look at a few of their newest, most detailed new models.

Check it out today!
Posted by Godfrey at 6:46 PM No comments:

Email ThisBlogThis!Share to TwitterShare to FacebookShare to Pinterest
Labels: Scibor

Good morning to you all. I hope you and yours are all well and safe. We can all name someone we know who has served in the armed services and we should take the time to remember them today. For those of you interested in learning more about the principles our nation was founded upon, I would suggest you follow the link below. You can find accurate reproductions of some of the most prominent documents of each of the last few centuries and documents from antiquity. Have a good day, remember what is important to you and happy reading.