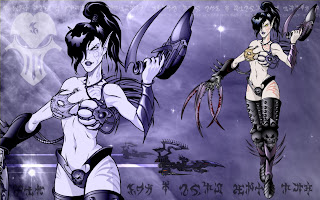 I am sure that everyone has heard the rumors about the new Dark Eldar that said to be coming out soon. Personally I’m looking forward to seeing all the new toys the Dark Eldar get as they haven’t gotten a new codex since 1999. For perspective the Tau have come into existence and gotten a new codex during the time that the DE have been running off the same version. So today I’m going to take a look at what is one of the most basic core parts of any army: the basic gun. The marines have the bolt weaponry, the IG their flashlights, the elder their shurikens, and the Tau have the fancy S5 guns. First up you guys have to understand that I don’t have any fancy insider sources (yet) so all the information here is based on the rumors already floating around the net and therefore must be taken with a grain of salt. The rumors about the basic weapons seem to be pretty much confirmed at this point, but nothing is certain until the codex is actually out.

Now onto the actual discussion: poisoned weapons. It seems that the standard shot will be a S3 poisoned (4+) AP5 that comes in a sidearm 12” pistol version, the standard 24” rapid fire version, and a heavy versions. So what does this mean? It’s the poisoned part that matters. The 4+ means that the shot will always wound on a 4+ regardless of the targets toughness, but if the target’s toughness is equal to or less than the strength of the weapon (3) then the failed rolls to wound can be rerolled. This is a pretty big improvement over the old splinter weaponry set which was a rather plain S3 AP5 with no gimmicks.

So what does this mean for the game? It depends on the race being shot. Marines and Orks won’t care at all, albeit for different reasons. Marines (and Necrons too) because they are used to being wounded on a 4+ and their power armor lets them shrug it off and Orks because they are used to being outright killed on a 4+. IG infantry are going to hate it because while they be used to being killed on a 4+ or even a 3+ they aren’t used to being killed on a 4+ that rerolls, increasing the kill rate to 75% of all hits compared to the 50% of non poisoned S3 and the 66% of S4. The Eldar and Tau aren’t going to be terribly pleased either, because while they do still get their armor saves, the reroll due to poisoned means that they are going to be making a lot more of them. Even the Tyranids have reason to worry as their defense is typically based on their high toughness rather than their armor save. And to poison weapons T6 might as well be T4. Tyranid warriors in particular could be feeling a lot of pain when they start taking wounds on 4+ from the most basic gun in the army.

So what do you guys think that this means for your army and style of play? For me and my BAs I don’t think much will change, but then again I am considering starting a DE army if I like the final feel of the army so maybe I’ll have to come up with some new tactics to work this new type of gun.
Posted by dramatt at 7:17 PM