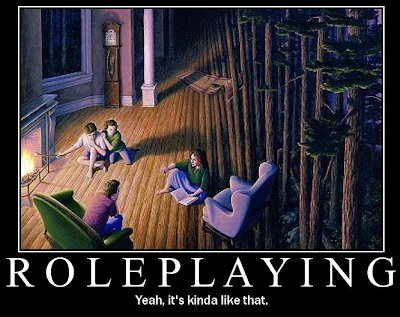 Changing pace for a little bit, I'm going to shift away from my usual topic of 40k and talk about games of a different (but possibly similar) feel. All games have an element of role playing in them, whether it be something as extensive as DnD where you create and play a character, to something even in 40k where you might try to think like or create a story for your particular commander or army. We all play these games to escape from reality in some form or another. Its the ability to roll play that makes a game more than just a bunch of nerds (meant with all due respect and love) sitting around a room together.


So what's the point? Well looking at the titles a little more closely is the key. As I said, most games are about an ability to break reality by roll playing. However at its core, a game is a game. The ability to present a game which allows for a perfect match up between role and roll play is often times extremely hard to find.


The ability to play a particular role of a game. This is often done by taking up the persona of one of a character.

So when it comes to role playing, we need to realize this is the aspect of this game that allows us to truly be creative and escape the normal bounds of what we experience in the world today. This is where we can slip out of being Steve, Jim, Chuck, or Adam and Become Gorbath the Impaler, Archmage Windric, Graves the Nine Lives, etc. We can make ourselves whatever we want, and often times change something about the way we speak or act to do so. It is rare in today's society to find something as immersive as a game which allows you to really dig deep and become a part of the world. One of my favorite games our in terms of RPGs is still my beloved DnD 3.5 set in Faerun. However, while I know a fair bit of the universe... experimenting in Deathwatch has been a very engaging turn for me. It allows me the fun I personally experience when playing a character in DnD but while playing in the 40k setting which is something I am very invested in.


The ability to play and manage the rules from a game perspective. Often this is done through learning rules, rolling dice, and anything else the game requires of it's players.

As much as I love playing up my character and staying true to the fluff I created for them, Role Playing can often get in the way of playing the game itself. I play games because I want some form of action. There are few things worse in a game than being stuck at a point of stagnation. Its dull, it's boring, and frankly it sucks. This can happen for a number of reasons. The one that I have encountered several times is when the role playing itself interferes. Some players either don't spend enough time doing it, or oppositely, others will spend too long, and high jack a game for nothing more than a very in depth conversation. These are great... but I want to roll the dice at some point.

Roll Playing allows us to play the game for what it is. It gives us the rules, skill sets, dice modifiers, and more. These are the rules of the world we escape to in terms of mechanics.


So how do we find the medium between the two? Often this is left to the guy running the show. The "DM" or equivalent has to be able to manage their group and keep things on track. It also comes into play in terms of overall design of the game at hand. Some games don't have a single person in charge, and therefore the players as a whole need to be responsible for keeping things moving. 40k fits mainly into the latter there. Its interesting to me to see the two aspects of the game clash and cooperate. Often it is the relationship between role and roll play that will determine the success or failure of a particular game. How do you interact with your gamer group? What issues or positive traits do they have?