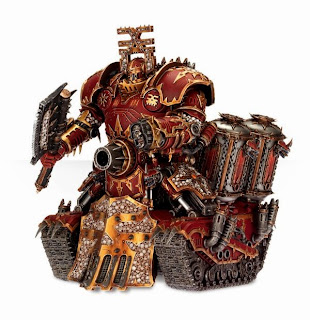 Havoc joins Godfrey and I for this especially red edition of the podcast. The three of us talk about Khorne Daemonkin, including what it does to buff out the assault phase, compensate for Khorne hating stupid magic, and allow for unique ways for players to spend more money! Likewise, make sure to check out our associated reference links.


Read More >
Posted by Corvus Sanguine at 8:27 PM No comments:


Hello there everyone!  I'm here to talk about something I don't know much about and something I hope to God I know more about, those being X-wing  and game theory.  Now I don't mean "game theory" as in a theory of how you best design board games or how to make the most money off them.  No, I mean the branch of economics that talks about how people make choices in different defined settings and how the structure of those settings ("games") influences how individuals choose, how they "play the game."  If you've ever heard of "The Prisoners' Dilemma," you've heard of game theory and have a bit of a leg up.  I'm going to start out with a short discussion of the Prisoners' Dilemma to illustrate some principles of game theory and then show how it applies to board gaming and makes me rather interested in X-wing, though I've only watched part of one game.

She Wants the D, But do You?

Hey Folks, welcome back. With more or less confirmed rumors that Eldar wraith weaponry will be going to the infamous Strength D, it has whipped many into a frenzy. While my immediate reaction wasn't (and to an extent still isn't) positive about this new development, I don't really find myself chomping at the bit to oust the dev. team. Well at least not for this change... the wargear system for the new Eldar Jetbikes is where the majority of my ire lies right now. But that's a whole different topic, alongside an even bigger other topic of seeing just how GW will handle renewing a codex which is not only hardback, but also has existing supplements from which it draws. But anyway, back to the topic at hand: The D!

Break your Allies, Crush your Enemies

Last time we looked at the Extoller Soulward, my current favorite two point solo in Skorne.  It's great at fixing problems that you don't have other outs to.  Now, let's think about a model that's much more Skorne than that whimp in a dress, a man so manly no shirt could contain those pects: the Mortithurge Willbreaker.  He doesn't bring you the ability to do much of anything you couldn't do already in your list, but he makes you do whatever you already do much better. He's got no weapons, he uses magic and he's got one of the most kick-ass names out there, but why is he a good piece to bring in your list?  Read the rest to find out.

Guiding your Way to Victory

You've heard "behind every great man is a great woman;" well, behind every great tyrant is a dude holding a rock. Yes, today I'm going to delve into the varied uses of one of the least audacious solos in my Skorne collection: the Extoller Soulward.  What happens when you take situational synergy, add in a "gotcha" gun, an understated ability and throw them on a fragile chassis?  Two of the best points you can spend, Tyrant.

I hate the space pope more than Godfrey hates my taste in movies.  I loath the idea of putting the most important person in your society in a war zone unless absolutely necessary.  Then there are characters and units who are only included in lists because they're the only thing you have or they're the only ones who fit the points available. What would it take for you to bring those models to a tournament?

That's  a question PP has been taking seriously to the betterment and detriment of WarmaHordes.  While GW has made characters like Pedro Kantor, Farsight and now supplements to encourage players to play different styles of armies, the ability to play an army from three or more books leaves me a bit sour on armies having their own sense of identity.  Not so with theme forces.  They've got their own very distinct feels that make one caster feel radically different from another.  Sometimes its' a list that shakes the earth of the competative metagame and sometimes it's "No, I won't buy your shitty Animantarax, PP.  Stop trying to make me."  So is the benefit of having these worth the unintended consequences that errors in designing these lists my bring?