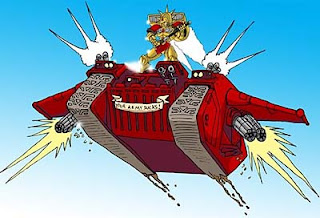 In this final installment of my now very late look at the new Blood Angel codex I will be comparing the new codex to the old pdf codex that the Blood Angels used to run out of. First up, the most obvious benefit of the new codex is that it is an actually bound book and contains a whole section based on the fluff of Blood Angels and a section highlighting professionally done painting jobs of the models described in the book. While this is something that comes standard in every other codex, it is something that the old pdf lacked entirely. However, this isn’t without drawbacks of its own. Most significantly is that by being an actual book it is something that costs money to buy, where the pdf was available for free download. While the fluff and painting display are nice they aren’t by any means necessary for playing the game, so compared to the pdf it is almost like playing the full price of the book just for the binding and nonessential sections. Whether or not this is worth it depends entirely on who you ask, but since this puts us on the same level as every other army I don’t think there is any real justification for complaining.

Next let’s look at the changes to the way that the Blood Angels now play. In terms of army wide special rules the new codex only gave us new things without taking away anything. Before the Bas had no army wide rules available to them that weren’t available to any space marine, while we now have the Red Thirst and Descent of Angels. Both of these rules are advantageous, although they may not be relevant to every possible build of the army, and obviously gaining things without losing is always a good deal. The majority of the units in the army are returning from the old codex and haven’t changed in either stats or wargear options, but they have gotten cheaper (this is mostly due the fact they no longer provide “free” death company, a change covered later in the article). The only real change to the returning infantry units is that the wargear has been changed to be the same as in the new vanilla Space Marine codex (storm shields, I’m looking at you). The biggest changes to returning units take place in the vehicles used by the Blood Angels. The drop pod was now been upgraded to follow the new drop pod assault rule, and by knowing that a unit can come in on the first turn almost where ever you want them and still fire can be a handy strategy. The land raider now has deep strike (a truly weird option that will likely be the focus of my next article). Most importantly is the fact that all rhino based vehicles (the rhino, razorback, predator, baal predator, vindicator, and the whirlwind) are now fast vehicles, a definite upgrade from the old over-charged engines and even that was only available to the rhino. The new baal predator even has the scout rule, which combined with the option to replace its twin-linked assault cannon with a flamestorm cannon, can do devastating things even on the first turn. As for the completely new units like the priests, sanguinary guard, the stromraven, and the new special characters, they are just icing on the cake. They don’t fit into everyone’s play style, but there is no arguing about the fact that they do give new options to choose from without limiting previously existing options and that can only be a good thing.

Finally rare is the change that can be changed without losing something of what it had and the new codex is no exception to this. The special characters changed rather significantly and while the new options can be very good what they do is very different from what they used to do and many people may not like the new versions. Also a big loss to some styles (and a non-issue to other styles) is the change in the death company. Before the death company were a must take as every infantry unit provided a member of the death company (at the cost of the unit costing a little bit more). This made every Blood Angels player use death company and more or less made the death company what set the Bas apart from every other space marine chapter. Now that death company are no longer “free” and must be taken as a Troops choice that can’t hold points and have no way of ignoring the Rage rule once they are out of a transport they require a much more serious investment of points in order to achieve the same results. Furthermore, they now have the ability to take power weapons and fists, but have lost the Rending Rule so the inclusion of some power weapons at additional points is required to make the death company as killy as they use to be. On the plus side the death company has gained a weapon skill, allowing them to hit almost any infantry unit on a 3+, the ability to give everyone power weapons has given them the potential to be ridiculously killy when the points are invested, chaplains now boost the death company even more by allowing rerolls to hit and to wound on the charge, and Furious Charge and Feel No Pain is just as awesome as it used to be. In the end the death company are now something you can build an army around rather than always having, which some people will like and others won’t.

All-in-all the new codex is most definitely an improvement. It allows for new options that no other army has and accentuates the “feel” of the Blood Angel army while inflicting minimal losses. I feel that this codex elevates the Blood Angels from just another space marine variant to their own army to be respected.
Posted by dramatt at 3:16 PM