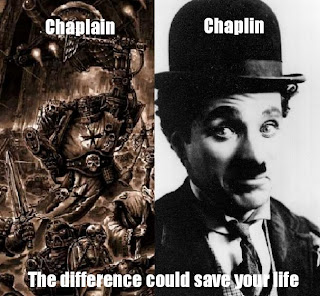 While I’m also fairly late in talking about our latest tournament I suppose that some of you might like to hear how the games went down. Loki and Ishamael have already done a good job of explaining the tournament style and the setup, so I’ll just jump right to my army list.


Game 1:
Game 1 saw me go up against the only other guy here playing a Blood Angel army. However, it really wasn’t a mirror match as he was playing a very different style than I was. Rather than focus on the all-out assault like I was, he was playing a much more balanced list that could be run under all most any marine codex and still work. It had three tac squads in rhinos, two assault squads (one with a captain with lightning claws), 3 multi-melta land speeders, and a full dev team with two missile launchers and 2 lascannons. The game went largely in my favor due to our starting positions. I won the roll off to go first and placed all of my units as far up as I could and centered around the middle. He choose to meet me in the middle, placing his land speeders on the front line and his devs close behind while keeping his assault teams and rhinos towards the back. He failed to seize the initiative, but managed to make two of his tac squads “happy” due to the red thirst. I managed to make one assault squad and the furioso dreadnought “happy” as well, but due to the presence of the priests it didn’t matter much. Turn one I surged as far forward as I could and took some pot shots at the land speeders, but failed to cause any damage. His turn one saw him fan one speeder out to the side while the other two mostly stayed put and fired into the land raider, but only shook it up a little. His dev choose to stay put and fired into the land raider, but only scratched the paint. This surprised me as this put his devs in assault range from pretty much my entire army, but then I realized that that was exactly what he had intended as his rhinos and assault squads were positioned a little behind ready to counter-charge my whole army once I’d finished his devs. Seeing this plan allowed me to come up with one of my own. I charged my termies into his devs and managed to fan out enough to also hit and destroy the two land speeders that had stuck around, with the land raider taking out the third after the termies got out. The rest of my army positioned itself behind the termies, but out of charge range of his army, ready to counter his counter-assault. With so many deadly terminators right in the middle of his field he had no choice, but to throw his entire army at them after his shooting failed to kill anyone (2+ saves with 4+ FNP is great for that especially with 3+ invuls for melta shots and the like). While they did get thoroughly devastated by that many guys attacking at once, one lightning claw and the reclusiarch managed to hold strong so that on the next turn my three assault squads fell on them like a ton of bricks and showed the kind of devastion that thirty furious charge assault marines can dish out. After that it was all over, except for the clean-up with me finishing the last of his rhinos off during turn 6 for a complete table.

Game 2:
Game 2 saw me playing another marine player, this one running Imperial Fists out of the vanilla marine codex. Night fighting was in effect the entire game, but my best range being 24” and getting first turn, we spent the entire game too close to each other for it to have any real effect. His army was a pretty balanced one using three tac squads, one on foot, one in a land raider with Lysander, and a six man squad in a razorback. He also had a shooty dreadnought using a twin-linked lascannon and a missle launcher, an assault squad with librarian, a sniper scout squad, infiltrating scout bikers, and regular bikers. The game was pretty straight-forward with me controlling the two points on my half of the field and him controlling one on his side with the two of us fighting over the point towards the middle (technically on his side). It pretty much stayed his way with him feeding me a squad at a time in order to keep my guys in the middle locked in combat. With Lysander making some awesome saves my guys didn’t go much of anywhere. Since the game was a fixed number of turns it turned into a draw when on the bottom of the last turn the razorback, which had just hid until this point zoomed out to contest one of my points causing a 1-1 draw. I knew it was coming, but unfortunately there was nothing I could send to stop it without losing one of my points anyway.

Game 3:
Game 3 was against our very own Heretic and was more or less the battle for second place. The Dawn of War set-up used isn’t as advantageous for my army as it is for most other assault armies as my assault squads rely heavily on the attached priests I usually choose to have everything walk on to the board turn one. Furthermore, using the modified system of kill points where each of my priests is worth 2 kill points can be something of a disadvantage. However, these are very small disadvantages when compared to the problems Heretic and his Tau army had. His tau list almost never has a good time against assault based armies and Dawn of War means he loses his first turn heavy shots from broadsides and no markerlights from the pathfinders. To be honest, it wasn’t a very fair match-up and the fact that I was making good rolls and he practically couldn’t buy a save didn’t help. I’ll leave it to him to better describe the contents of his army. His strategy, of grouping together and trying to use the devilfish as assault screens, was the best he could have done under the circumstances, but my power armor and FNP made me practically immune to anything his fire warriors could dish out. The 5 crisis suits and the commander (in two squads of 3) dished out some unsaveable hurt, but just not enough to stop me from rolling through his infantry to table him. To illustrate his luck the very first time I fired anything was a meltagun out of 6” into a devilfish blowing it up and taking a total of 10 fire warriors with it. It wasn’t as if I didn’t have any bad luck of my own, as at one point later in the game a squad of 8 assault marines and their priest had to jump into a crater to get within assault range of the last fire warrior squad remaining. Three of them got 1s on the dangerous terrain test and died causing a Leadership test, which they failed and ran away. Of course by that point it didn’t matter much. MVP for me that game was definitely my second priest with a jump pack (who is going to get his own name after this game). He and his squad were able to slip in around the devilfish screen on the right side and because of that got to assault and wipe out/sweeping advance a fire warrior squad, a team of 2 broadsides, and a team of 3 crisis suits (not the one with the commander though). This definitely earned the attention of the rest of the tau as they then turned their guns on the squads and with tons of fire warrior fire and the plasma from the other suit team quickly mowed down the squad until only the priest was left alive. That priest was then able to assault a group of pathfinders killing a couple and running them down when they tried to flee. Out in the open again he didn’t take too much fire and saved what he did take as the tau had to worry about the other squad of assault marines and the terminators who had busted their way through the devilfish screen and taken out the front fire warriors. In trying to keep out of the way of the termies and remaining assault squads, but still be in rapid fire plasma range the commander and his two suits left themselves open to assault by the priest who did just that. The priest was able to cause 2 wounds, one of which was not saved and then passed two saves of his own to win combat by one. The commander managed to fail his leadership and got run down by the lone priest.

All-in-all it was a horrible game on many levels for Heretic, but he took it well and I can’t complain as it gave me second place in the tournament.
Posted by dramatt at 4:08 AM