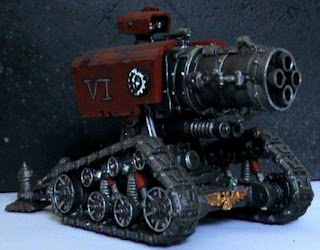 Hey folks, Ishamael here to bring entertainment and large explosions. Recently I have been looking into starting a Marine army, and have been considering my options. So far, I have no desire to play Wolves or Templar, but the other books hold something that I would like to play, whether it be Ravenwing or jumptastic sparklies. To this effect, I have been wondering on how to construct a list that uses Thunderfire Cannons. I like the model, and it's quite flexible on which kind of infantry you will be killing this particular turn, and it can be very annoying with the Tremor shot. So, here is a 2000 point list, with notes below it:

Master of the Forge- Conversion Beamer 120

Fairly simple. The Master deploys with the Scouts in a fortified building, giving everyone a great save, and they just shoot at heavy targets the whole game. Given how the Beamer works, in the back of one's deployment zone would work well. The cannons deploy to cover as much of the board as possible, taking cover saves and bolstering defenses where available. The Dreadnoughts hit light vehicles to de-mech enemies. The Tactical Marines combat squad up, with double meltas advancing in the Rhinos, and the missiles sitting back, hopefully in cover, adding support fire. The Landspeeders threaten heavy vehicles getting too close, or just fry something. This list works at a great number of ranges, and helps whittle away enemies as they get closer.

I'm going to stew on this list, because there aren't really any obvious threats apart from the Cannons. As such, I may need to go back to the drawing board to come up with something the opponent has to deal with (Shrike 'n Termies).

This is just one thing I'm considering doing with Marines. Grey Knights are very tempting and are on my list, yet I want to see what I can do with other books that are good and rarely done. Like Ravenwing, or a full-on Dreadnought army using the vanilla codex.

Email ThisBlogThis!Share to TwitterShare to FacebookShare to Pinterest
Labels: Ishamael