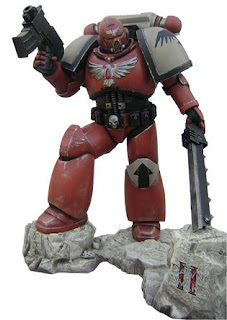 Salvete everybody, Ishamael here to show how my Thunderfire experiments have gone. While initially it was nice to have the Master of the Forge and the Scouts to hide him in, some recent point changes have unlocked what I find to be a stronger overall take on the Space Marine codex. Thus:

This is 1998. Dropping the Scouts, Master of the Forge, and two Hunter Killer missiles has allowed me to toss in a unit consisting of two Landspeeder Typhoons. So, instead of the minimal damage output from these units, I have gained two long range models that have two missiles a piece for every turn that they live. For 180 points, they add a goodly amount of both anti-tank, as well as anti-infantry. While I lose a fast multi-melta, I still retain my four double meltagun units to advance in the Rhinos to pick up the slack in the melta-department.

Concerning the deployment of my troop choices, combat squad and mount up as usual, with this difference. The two Rhinos without hunter-killers cover the ones with the missiles. Turn one, the front Rhinos advance and pop smoke, probably 8 inches, then the hk Rhinos roll up right behind them to advance 6 to fire their missiles. The Librarian rolls with one of the hunter killer squads. This lets him use Null Zone to full effect, and he may teleport a squad away should the occasion require it. Something funny I noticed is that the Speeders can give the Dreadnoughts cover, but it doesn't work the other way around. Sad face. :< Albeit, 10 missiles turn one, then 8 after, does not seem bad. The missile launcher half will deploy in cover with the Thunderfire cannons, which will make them hard to dislodge.

Currently, I do not have the dimensions of the Thunderfire cannon, so it will be a while before I get the chance to figure out how I might manufacture a cover save for the unit. The issue lies in the unit consisting of one infantry model, and one AV10 vehicle. Hits are randomized against the unit, so it will be best for me to learn how I might make sure that both models have cover saves. A single glance or pen against the Cannon destroys it. Hopefully placing Marines from the missile combat squad will suffice. Maybe I will get lucky and the Thunderfires will be low on the target priority list. ;)

So, as far as efficiency goes with what I desire to use in this list, I think I have actually gone down deep enough to find as good a list as possible for my purposes.

Any thoughts on how I may get some more efficiency here? I should probably put a melta bomb on a sergeant than the Storm Bolter, but it's hilarious to me at this point.

The Bearded Alchemist,
Ishamael
Posted by Ishamael at 7:34 PM