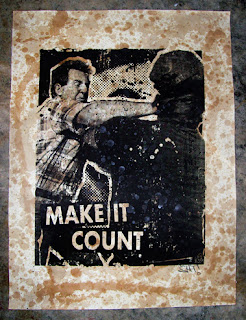 So in response to Heretic's Maniple method, I thought I would write up a quick article to define the approach I take to the battlefield which I have no real name for, I simply call it "Making it Count."  I don't mean to undermine the Maniple in any way, this is just a different method to think about.


The picture above illustrates one of the key features of this style which I'll get back to in a minute, but in a nutshell this method is about maximizing the use of every unit and every model to the best of your ability.  This way when you spend points on models, it is more likely that they are playing an active role in the game.  So let me first describe Active vs. Support (which seems self explanatory, but here goes).


Active Models
These models are those that contribute to the mission or game at hand.  This can be all manners including offense or defense.  For instance, a space marine in a combat squad who holds a missile launcher is an active model.  An Ork Mechboy with a K.F.F. giving vehicles and infantry nearby is being active.  These units contribute in some form or another to the overall actions of your strategy.


vs.
Support Models
These models serve less purpose and are generally only taken because the unit forces them upon you, or you are trying to be defensive.  The other 4 space marines along with that missile launcher serve no purpose when the target is a vehicle (generally) or the target is over 24" away.  They serve as surplus wounds before the missile launcher is in danger.  Likewise, any model that is purchased and is rarely used will more than likely fall into this rut of only being good to die before the models wielding more than standard issue wargear.


My theory is to build lists that will maximize the number of models being used in every unit and to provide as much power in each unit, so that as much of my list is taking an active roll in the game.  This often means taking units that serve very specific roles is important.  However there is more than just selecting units that have a very specific goal.

This mentality also tries to utilize as many units as possible in the overall scheme.  Troops for example are often overlooked as viable choices for being active.  From what I see on the web, and indeed at local tournaments, people generally use their troops sparingly and look at them as being there for objective grabs and the occasional support shots here and there.  This is where "Making it Count" comes in.  Admittedly I play Templar, and in my opinion we have one very excellent choice.  With the ability to bring very large squads, we can quickly make good use of every model in the unit.  And while most every army can utilize their troops in some fashion, this mentality must come in the list construction phase.  It is important to note that troops are generally pretty cheap, and while their stats and weapons may not be the best... you can generally get a pretty healthy amount for relatively low cost.

For example, I played a round against a good friend of mine this past weekend.  ZerkeX had dusted off the old TH/SS Shrike list and brought it to bare against me.  I was pretty sure I would get mopped up pretty handily, but I had one thing on my side going into it.  His TH/SS termies numbered 20 (2 ten strong units).  Quick math says that's 800 points.  Now he had also hit me with Shrike and a unit of assault marines putting the overall assault somewhere in the realm of 1200 or so.  But I had my entire army right there, sitting at almost 1850 still.  I think I lost my land raider around the time the termies got there, but beyond that I was still pretty healthy on points.  My units strike at initiative as so they could all strike before getting hit by the hammers.  I was able to get enough hits to cause quite a few of his termies to go down before they could swing.  This is a pretty big deal as those models could not be active other than to keep other members alive... which in a way is active, but less so than getting to strike.

This is by no means a slam on Zerkex, as he played solid.  The dice were fairly unkind to him and generally I had pretty good luck in the fight; but I can say I was forcing quite a few more rolls on him as I just had a lot more models in the engagement.  Again in no way his fault, as that is just the way you have to deal with that kind of rock-style unit... a surplus of shit.  And since I'm usually pretty full of shit.. lol.  And while these attacks lacked the high-powered punch the termies had, they had the advantage of being much more in terms of quantity.

The mentality here is to say that while not all units are good, it is generally possible to bring a fairly "standard" list without too much power building going on and do well with them.  Take a few things to give some perks here and there like chaplain re-rolls or libby Null Zone and you quickly find the ability of those around get pretty reliable.  That's why I hate the idea of 1 unit vs 1 unit comparisons when we know that a particular unit will generally be working on the principle of being combined with another unit.  My blobs never hit the table without a chaplain with cenobites attached because that's just too good to pass up.  It's like they were made for each other.

Overall the picture says a thousand words as we see some lowly plaid wearing guy beating up some very skilled looking opponent.  I think too often people pass up the opportunity to utilize their models efficiently and end up playing uphill against opponents who utilize more points within their list by simply involving more models.  Do I still take something like a meltagun?  Sure, but it means that that unit will have an answer to mech in the even the tank hunting units fail.  They are more fail safe items (which don't hurt to have to put scary S8 wounds out there) vs Vulkan marines who build to use those shots as their primary damage.  This tactic means its more likely that the marines in my list will be able to participate vs those of Vulkan... not always the case, but it is the case I have seen in my experience.

So how best to maximize?  First utilize as much specialization as you can.  Take units that you know are good at something, and fulfill a need for your army; this way other units can focus on other needs.  Second, take units that will be used.  It's good to have support when you can, but remember that units and models than don't hinder the enemies progress are points spent doing little to nothing.  Even small units designed not to be shot might find themselves under the gun if the rest of the army is dead due to being at a points disadvantage.  Third, look into units with an open mind, and think of them not as a single choice, but how they will work in conjunction with those around them.  I take 2 blobs in close proximity because I know it is possible to answer one, but hard to answer a second.

Overall, I generally feel that when I am on my side of the table with my "standard" units, I feel like I have a good sense of board presence both in the sense of overall area I cover, and the ability to make a difference.  I can run my big scary unit of termies on one flank, and a couple blobs and a chaplain on the other and expect similar results from both... that says something.

So what do you think?  I know some armies out there have more reliant or potent troops, but how do you feel about the good old troop units being an active part of your army?  I'd be interested to see how people feel about this one.  If nothing else, the meta might struggle against the unconventional.