Last time we talked about how to build a list that could imitate the maniple both in its organization and its adaptability. We talked about how distracting units can add to the survivability of troops choices and how the survival of those troops is essential to winning most games. Now that we've looked at the basics of this mentality, we need to look into how it can be applied by looking at an example army and some of the tactics used by that army. I've been developing an army list to implement these ideas and wanted to explain why I chose these units so I can explain how they fit in the maniple mentality and how I intend to use these units. Now for the list:

By the way, I take no credit for the images in this article. The tactical squad isn't mine, but painted by Chosen1 from Team Snake Eyes and deserves a repost.

Let's start at the heart of the list, the troops whom I said were so important to winning any game with objectives. I said that the durability and damage capacity of a unit was proportional to their threat level in the Kill Them All (KTA) mindset and that to protect your troops you should keep them small and lightly armed so as not to threaten your opponents and draw fire. When you look at my list you'll see that they are not only the most expensive unit in my army list, including their dedicated transport, and they are at their maximum model count, both seemingly contradictory to what I said. I decided to build my troops like this to exploit one of Codex: Space Marine's special rules, specifically the combat squads special rule. In case you aren't familiar this rule allows certain units, including tactical squads that are ten models strong to break into two five model squads at deployment and be counted as two different units for all game purposes from then on. The exception to the proviso about 'combat squading' at deployment is if the unit is deployed via a drop pod, they may break into combat squads when their drop pod arrives from deep strike. Unless I expect that my troops choices will be targeted ahead of the distraction units, I will combat squad each tactical squad when it arrives from reserve, making each ten model squad effectively two five model squads.

Let's get into one of the bigger complaints I've heard against the tactical squad, that the ability to have a short range special weapon and a long range heavy weapon in the same unit. I'll get into why I chose the weapons I did when I discuss my choice of Vulcan, but for now let's look a why I believe this ability is a strength rather than a weakness. The crux of my argument is the use of combat squads to maximize each of the weapons: heavy weapons need to be stationary while special weapons need to be close to their target to be most effective. If you have both of these weapons in the same squad you will have a difficult time maximizing both weapons and most likely won't be able to do it. However, by dividing the single squad into two smaller squads you can maneuver each squad so that it is in its optimal position. The value of having an anti-tank weapon in a squad that is primarily armed with anti-infantry weapons is subjective, but speaking from the perspective of a xenos player for whom that option is generally unavailable, I value it very highly. 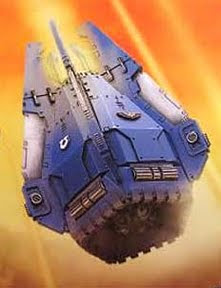 I chose to use drop pods to help my army fulfill the mobility and adaptability portions of the maniple mindset for a few reasons, though let's begin with the weaknesses of drop pods. In comparison with a rhino the drop pod offers my tactical squads less protection when they are on the table as they must immediately disembark and cannot reembark. The rhino can even help protect itself from damage by using their smoke launchers once per game. These are things that a drop pod simply cannot do, but there are things that a drop pod can do that a rhino cannot and I believe these advantages outweigh the disadvantages.

As far as mobility goes, the drop pod offers what I call 'one-shot' mobility as opposed to the rhino's standard style of mobility. Like deep striking terminators and infiltrating scouts, the drop pod can deliver the embarked unit to most any point on the board, but but after that the unit is on its own to get where it needs to be. A rhino may take a while to get the unit to where it needs to be and can be destroyed before it gets there, stranding its passengers short of its destination. It's a trade off that offers different optics and tactics for the army, but I'll side with the drop pod as it also offers me adaptability that the rhino doesn't.

I'll admit that the rhino chassis is probably the best model that Games Workshop has built because of the number of vehicles that are based on that frame, but the rhino unit is not as adaptable as the drop pod because it forces your hand, admittedly in a way that most models do, but in a way that drop pods in 5th edition codices do not: you must either deploy the model on the board or you must place it in standard reserves and enter from your long table edge. Admittedly, Kor'sarro Khan allows all units to exchange combat tactics for the ability to outflank and this is a powerful ability, but he is an exception. Drop pods allow me to use my one-shot mobility without allowing my opponent to being able to prevent me from doing so via the Drop Pod Assault special rule. This rule forces all drop pods into deep strike during deployment and forces half of those pods to deep strike on turn one. While I don't like being forced to do much of anything, but this is an awesome rule that allows me to adapt to counter tactics that can be used to counter my drop pod assault. 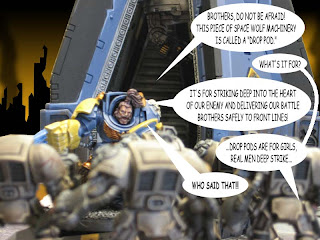 Some of you are familiar with armies that can also deepstrike on turn one and have developed deep strike defense techniques that are very effective, but the a tactic that every army can do without using any characters is to go into reserve themselves and force me to bring in half my drop pods without knowing where my opponent will be. This will achieve its goal of making me show where I want some units before my opponent has to choose where he will place his, but at the risk of his army entering piecemeal. Depending on what I consider the largest threat to my claiming objectives I either bring in my dreadnoughts to create zones where my opponent cannot enter the board without risking being attacked or if I believe I need to have my dreadnoughts strike at specific units that can easily avoid them if they are on foot I will deploy my tactical squads, combat squad them and allow the multimelta combat squads to become stationary and fire when my opponent's unit enter the board. The greatest thing about the drop pod is that I can choose where I want to place my units later in the game, when I have more knowledge than I would have if I had to place them during deployment.

I've been rambling a bit too long on the role of the tactical squads and drop pods in my army and I want to give you all a chance to air your responses to my thoughts before I lose your interest. I'll get into the other portions of my army and their tactical roles in my next article. This Saturday I'll be attending a tournament in Blomington at the Game Preserve and I hope to see you all there. Until then,