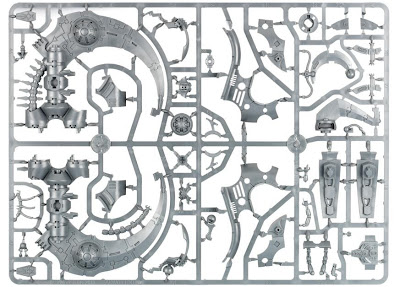 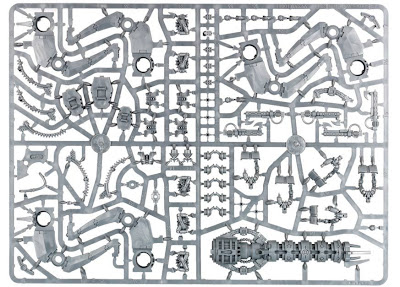 Hello everyone.  On today's episode of Dragon Ball... or rather Inside Look, I thought I'd take a look at one of GW's newest kits, the Ghost/Doomsday Ark.  At first glance I was immediately shocked at the level of detail that has gone into the new metal men of the 41st millennium.  Much like the Mandrakes of Dark Eldar, the new Necrons utilize a fairly decent amount of engraved lines and built in details.  This is a great improvement upon the old as it just adds a level of detail that the majority of the hobbyist and players have a hard time achieving.  It seems the sculptors at GW have gone the extra distance to really make this new line shine.


The next thing I noticed was just how jam packed the sprues are.  I mean, there is very little air between the pieces, which is both a good thing, and a bad thing.  The good thing is it meas that this model has a lot of pieces to it, and each of them generally shows through to make this bad boy a beautiful piece.  Now admittedly, it is able to make two different variants, but both of which are gorgeous to see on the table.  The bad thing come when it's time to assemble the darn thing.  Not only is the process pretty complex, but just getting the parts you need can be a chore.  Corvus Sanguine has already built one, and I noticed he was actually cutting the sprue in sections just to get what he needed.
From a business standpoint... this is an interesting move.  Obviously this kit only has two molds, and so (in theory) is cheaper to produce than those which use more.  It would be nice to see GW take this route with future kits if it meant dropping prices.  The internet has made no secret that with the rise of 3D printing getting more and more detailed, GW might be on a very dangerous threshold when it comes to price gouging.  Maybe this is the first step in lowering their costs to accommodate that fact?  But that's enough speculation, so back to the kit.
Making two very good choices for this army, This kit has a lot of promise for the Necrons.  I imagine it as being on a similar level of utility for the army as the Rhino/Razorback combined with something like the Vindicator... all for about the same price as one and some change.  Not a bad deal.  I've also seen some pretty interesting conversions to cover the army until its next wave of models.  40k Hobbyists all over the interwebz have created custom Tri-Arch Stalkers utilizing this kit.  Many of them have turned out pretty well in my opinion.  Check out this tutorial.
All in all this kit, while a pain to build is a pretty solid kit.  Not only in the model it represents, but also what it could mean for the level of detail and amount of bitz that could be coming in the newer boxes.  Hopefully in the future we might see some new kits for some of the older boxes that have been the same old for the last couple of editions (say... the generic Space Marines and/or Fire Warriors?).
Cheers!
Posted by Godfrey at 10:52 AM

Email ThisBlogThis!Share to TwitterShare to FacebookShare to Pinterest
Labels: Inside Look, Necrons