"Roll" With the Punches 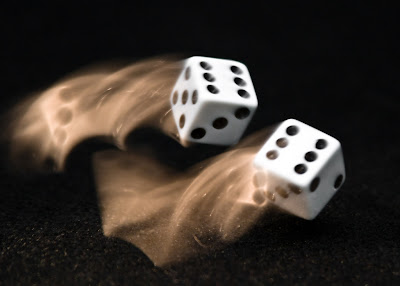 Hey there everyone.  I thought I'd take a look into some units that don't get much press these days.  You know, the ones that make you roll to see what they're going to do on that particular day?  Yeah, those.  These units are something of a remnant of 4th edition's look to make things a little less formulaic.  Though the only real place they were seen is those days are with within the Chaos Space Marine and Chaos Daemons codexes... must be something about the warp that makes you forget what you do on a regular basis :P.

These units rely on fate to make their uses seen.  From possibly rolling a negligible or potentially crippling result to massively powerful perks... these units add a certain x factor to the somewhat mathematical happenings of the game. 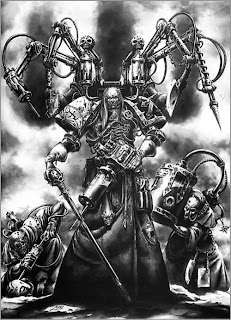 So lets take a little stroll through the whimsical world of units that never get fielded.  First off there is the big bad boy of dice rolling himself, Fabius Bile.  In the old days you had to roll just to see what stat line he'd be bringing to the table.  He'd be a weakling, an offensive powerhouse, or a rock... but never all three.  When they re-wrote the codex, he shifted to a non-shifting stat line, but gave the option to perk up all of the CSM troopers in the army.  Not a terible perk either.  Getting S5 fearless troops (who can then still buy a mark) is a pretty sweet deal... just don't roll a 1 or a 6 or things start getting silly.  It's that lack of predictablity that costs the character.  He himself is not terribly survivable outside weak attacks, and lack of a power weapon does make him less potent, but he does cause instant death, with 7 attacks, and has FnP... so he's an interesting choice overall.  I think the Cult troops being so good might also detract from the uses of the buffed up CSM's.

Overall he's always been a guilty pleasure of mine.  Not many people see him, and maybe for good reason.  But he's a pretty neat little trick to bring out on occasion.  Just make sure to sacrifice a kitten or two to the dice gods of chaos.

Next up is a unit that still resides in the good old Chaos Space Marine codex, the Possessed Marines.  When I built my Proginator's Pride army, which centered around Fabius Bile... I used these guys as his bodyguards.  I modeled some twisted, mutated guys for his "finest creations."  Wasn't really thinking of them as daemonically possessed, so much as hideous monsters Fabius had created.  Was quite a fun little unit that kept up the theme of the pre-game dice rolls. 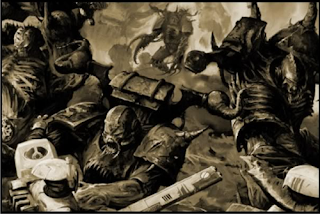 These guys have any of 6 abilities ranging from Scout, Furious Charge, Fleet, Rending, FnP, or Power Weapons... quite an impressive array of abilities to bring to the table.  The one issue is that the roll is made just before the game starts... so even during deployment, you'll have no idea what they are going to be up to.  But they do serve as a decently priced unit which can make a pretty good distraction.  The only real problem is not only are their points being used for a unit that doesn't perform as consistently as other choices... it takes up an Elite slot... which might not go well with some lists.  Maybe not the best... or even a good choice to many, but I think they serve as a fun unit that could make he enemy have to think on their toes if the right number comes up for them. 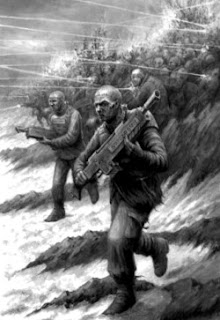 Finally, we'll branch out of the warp to see one of the newest units to utilize the roll-em-to-goodness engine.  The IG codex is by no means limited in what it can bring to the table, but a hidden little option in their troops section reveals a cool homage to the past with the Penal Legion.  cheap and effective, the Penal Legion gives you 10 dudesmen for 80 points.  No options, but they do get to roll prior to setting up, a vast improvement over the Possessed.  They only have 3 options, but not a one of them are bad.  They can get assault 2 guns at 24" (making those diddly little guns a little less puny) and keeps them mobile.  or perhaps you'll get crazy psychos with the Furious Charge, Counter-Attack, and Fleet rules... who needs to shoot when you can punch them to death.  Or maybe you might get a unit of shank-a-bitches with 2 close combat attacks and rending... even the mighty Space Marines fall over to them sixes.

These guys may be a little hard to predict, but they make a cheap useful unit to fill the gaps between those hulls.  I plan to run a unit of them in my Death Korps... seems appropriate :D.


So why do these units never see play.  I can understand the obvious reason behind not using them for tournament play, as no one wants to waste points by using a unit that doesn't end up gelling well with their list.  But how about free play?  Its rare to ever see these units used by anyone.  While it's possible that there are just not many people out there who enjoy the fluff of these guys, I personally love seeing these crazy dudes.  Maybe I just enjoy playing units with a little fun in their mechanics, but these guys make me remember the crazy days of old.

At the end of the day we play a game based on dice.  These units add one more thing to the deep dark pit of fate that is chance, but they also bring some unique units to the table that could potentially kick the crap outta those consistent units if the dice roll the right way.  Each is a gamble, but hey, why not break the mold and roll dice before the game too.  If nothing else, you can say you won the pre-game phase right? :D