Her Name's Viera! (Round Two) 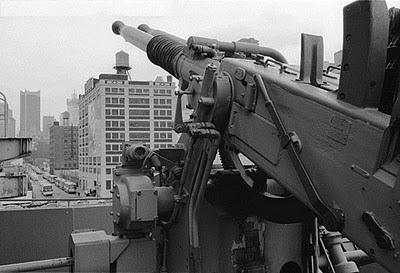 Hello everyone, and welcome to another post of wondermazingly splendiferous proportions.  So a long while back I'd written an article on the good old Devastator units from each space marine codex.  With the shifting rules of 6th, I thought it'd be interesting to do a follow up on another of the heavy support choices that really benefits from 6th's new rules.  The biggest of the Big Guns ye olde Space Marines can bring to the table.  The Vindicator!

Vindicators in General
So lets break this bad boy down.  The Vindicator is a 13/11/10 rhino chassis with the big dozer blde up front, and a cannon made for leveling infantry, vehicles, and walls alike.  In 5th, it lost a lot of its luster because against infantry, they usually had a 4+ cover save, making it much less scary (if you had a rock or a wall to hide behind).  Vehicles weren't really worried unless you managed a direct hit on the hull, which wasn't terribly hard, but was something to think about.  And lets face it... walls weren't really in play much in 5th.  Overall it was a bullet sponge that tended to die long before really making much of it's points back.  But now 6th has made some changes.

First and foremost, cover was reduced to a 5+ across the board of standard saves.  This means that unless your bringing a form of bonus cover saves, this weapon is gonna make you enemy's infantry fan out to avoid death on mass.  Needless to say with the want for 2+ saves, this cannon is really gonna have anyone paying for it nervous.

Second, the vehicles.  This is where the changes really struck gold.  No longer does one need a center of blast to be effective against vehicles.  The S10 with 2D6 take the highest makes for a pretty solid chance of getting through just about anything, even the mighty AV14 is gonna be a little nervous here.  And with AP2 now meaningful in terms of damage output, this cannon has versatility in all the right ways.  Basically if you fire AP2, you're looking at the 5th ed. damage table with the boon of wrecks are explosions now.

And In conclusion... Walls... they actually exist outside of city fight now.  With fortifications or even neutral decapitated versions on the field, the Vindicator can actually fulfill it's roll as a wall-crumbling, hole-puncher of enemy defense lines.  And if you look at the chart for fortification damage, there is a 7 result which topples the whole thing, and practically everyone in it.  AP 2 and 1 are the only weapons capable of this result... so that AP 2 comes in here as well.

Overall the Vindicator is a vastly greater choice to consider when building a list.  It cant be silenced by a single glance anymore, and has some massive offense to bring your list; not to mention in one of the game varients, they count as scoring.  But not all Vindicators are created equal.  Indeed, certain codexes can field these bad boys with a little more kick than others.  So lets take a closer look at what codexes can make these already terrifying tanks even more vicious. 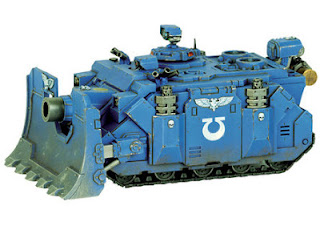 Codex Astartes
This particular version of the Vindicator actually comes in as one of my lower choice codexes.  As it does not benefit from Chapter tactics, and it's inclusion of Chronus isn't really optimal (you'd rather have that BS5 on straight shot weapons over a blast weapon any day).  Overall, it's still a very solid choice for the codex, but overall it's not much more than what you read above... which is still quite a good reason to take it.

Overall, I'll give it a solid one thumb up.  It's a good choice, but nothing overly special in terms of tricks beyond its impressive starting line. 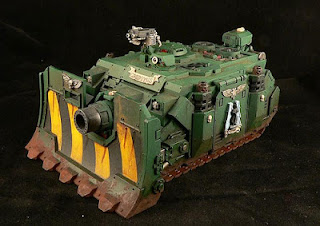 Dark Angels
This codex is no stranger to not having very optimal choices, and sadly this is no different.  While I'd like to say it's right where the vanilla codex sits in terms of this choice, it isn't.  If you look closely, the tank doesn't come with the Siege Shield which is standard on the vanilla pattern Vindicator.  Yes it can buy the dozer blade, but that is more points for a less effective piece of vehicle wargear.  Sadly this is not the codex you really want to look to for good deals on Vindicators.

While I'll give it a single thumb up, it's an iffy one, that doesn't really stack up to it's competitors.  Though we'll have to see after the new codex comes out (which is rumored to be pretty soon.) 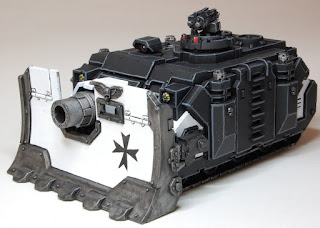 In my attempt to promise this is not due to personal bias, I have to say this is by and large my top choice for the Space Marine codexes to run this bad boy.  First and foremost I will say it is the most expensive of all the choices, and like Dark Angels it too does not come with the Siege Shield, but it does have the option for dozer blades.  That said, it has one specific reason it stand out to me as being the best.  Power of the Machine Spirit.  It is a purchasable upgrade for this tank... making it effectively impossible to shut up without destroying it.  On top of this, it can move up to 12 inches and still fire, keeping it just as mobile as it's "faster" cousin in the Blood Angels codex.

Two thumbs, and both big toes up for this tank.  Several options, and some mean power to keep this one trucking.

As a side note, Black Templars also have the best Techmarines, and thus have a greater chance of being fielded in their lists.  In the event the Vindicator looses it's primary cannon, or just needs hull point love, this codex can help sustain that firepower quite well.  Just my observation. 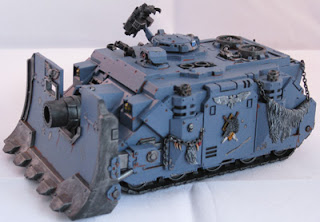 Space Wolves
For a brief summary here, see my entry on the Adeptus Astartes codex.  They have identical entries, and with little to no character interaction here as well, they have pretty much the same lease on life.  Again, still a solid option, but this version is just like the good old vanilla variant.  It does lack the option for something like Chronus, which while being a bad choice in my opinion, still factors in on the comparison chart.  Overall, the Long Fangs would probably do more, but a single Vindicator wouldn't be terrible.

A solid one thumb in the air for this one.  Just watch out the space pups don't pee on the treads :D 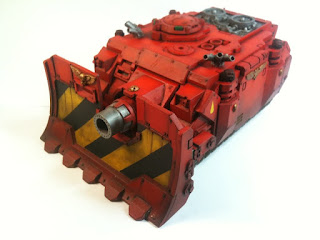 Blood Angels
This is what I'd consider to be the second strongest of the codex choices in terms of the Vindicator.  Again it has the Baal Engines making it much faster.  While it can't move over 12 inches and fire, it does open up otions ofr such tricks as long range tank shocks and rams.  This gives it an outlet in the event it looses it's primary cannon, and thus makes it a stronger choice.  But in sheer "why did I bring this thing to the table... on yeah the 10/2 pie plate" thinking, the Black Templar variant will do more.

A solid two thumbs up here.  More strategic options, and some powerful special rules keep this tank bringing the paint til it goes down.


Overall, the Vindicator is a much more solid choice than ever it was in 5th.  It does merit serious consideration in competitive and even free play lists.  If you are bringing Imperial Guard, and aren't using their heavy support for anything in particular, you can't go wrong with a single or a pair of Demolishers.  The new rules for squadron are much less punishing, and the higher Hull Points and Armor values (plus the ability to take a lascannon up front and rule allowing for both to shoot after 6 inch moves) make these beasts a huge threat to the enemy ranks.

So what are your thoughts on the Demolisher Cannons out there.  From my point of view they seem pretty solid now.  Nothing like converting your enemy lines into slag and bitz with not but a single shot from your lines.  Until next time.