Coming Back from the Brink pt 4: Infantry Weapons

Today we're going to talk about the one thing that makes the T'au anything but a laughing stock, their bullets guns.   Now I'm going to have to break these down into categories again because of the lack of universality of T'au weapons.  I'm going to be referring to the strength and armor pen values of weapons, but most are the same, so if I don't  say the strength or armor pen just assume it's a five.  Sadly, T'au don't have access to Atomic Annie (above) or much in the way of blast weapons, so unless I tell you otherwise it's a straight shot weapon.  I'll try to include the weapon's availability but I will probably miss some of them in this retrospective.  As always, feel free to reinforce or denounce what you read.  WARNING: this will be a multi-post article. 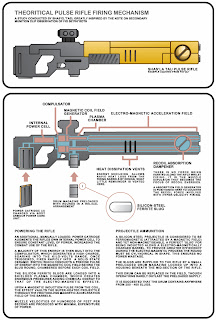 Pulse Rifle - The bread and butter of all of my Tau army, this is my default weapon for fire warriors.  Coming in at the assumed values, this is an impressive basic weapon for your standard rapid fire troops, that is roughly comparable to a boltgun in anti-infantry damage output wielded by a marine, with some more capability to damage a light vehicle.  A full strength, unaided fire warrior team is able to expect to kill an AV 10, HP 2 vehicle (e.g. a speeder) or strip a hull point from an AV 11 vehicle.  While this is great for basic troopers, especially without a special weapon, it is small potatoes compared to the vehicular slaughter T'au want to bring.  I brought these in 5th edition because of their ability to fire twice within twelve inches, I bring them now because I suffer no penalty for moving and firing.

Pulse Carbine - This has the same strength and armor penetration as the rifle, but is in many ways now a poor cousin to it.  While it's hallmark in 5th was the ability to move and fire, albeit at only eighteen inches, while the rifle could only fire on the move at twelve inches.  With the new rapid fire rules, there is only a three inch window where the pulse carbine is equal to the rifle in damage output and excels it by virtue of its pinning nature.  I've never put much stock in pinning as a rule, at least against the Imperium, but it is what these weapons sell themselves on.  If you want to combine Tau and IG to pin your enemy, go for this.  If you are a gun drone or pathfinder, you don't have a free exchange option, if you have one at all.  Gun drones at least get the dignity of a re-roll to mitigate their ork-y ballistic skill.

Pulse Pistol - Never available as a choice, issued to sniper drone controllers and bailed-out pilots, this is a bolt pistol +1.  Nothing much to say here.

Rail Rifle - The only option for pathfinders to trade out their carbines (and markerlights) for and the weapon of sniper drones is this weapon.  Nowhere near a poor weapon, it denies a power armor save and wounds marines on twos with the ability to pin them from three feet away.  I would have very little to say against it if I didn't consider the opportunity costs of taking it.  Pathfinders forfeit their markerlights, which if generally why I would take them, and pay points to acquire these guns.  Sniper drones, while not as atrocious as they used to be, have to compete with the rest of the T'au heavy support for slots.  If you are taking a second force organization chart at 2000 points, this is alleviated and I would suggest you give them a go if you have 80 points. 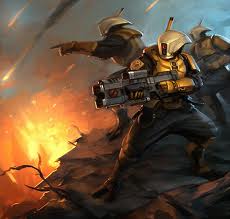 Markerlight - Oh boy these guys.  They are the letter of the law pacifists of the T'au and get around all saves because they cause no damage in and of themselves.  Oddly enough, with the new FAQ hits from these can lead to a lascannon hit on Flying Monstrous Creatures (FMCs) due to the Grounded rule, but I digress.  In most cases the markerlight will only hit and place a token on the marked unit.  The variety ways these tokens can be expended has cause imperials to call them 'the valkyries' mark.'  A unit firing at the marked unit may, before any rolls have been made, expend any number of tokens to do any combination of the following, though the token's benefit only benefits a single units, so they must be rationed: raise the firing unit's ballistic skill by one (cumulatively up to ballistic skill five), reduce the marked unit's cover save by one degree (cumulatively to negation), cause the firing unit to ignore night fighting for a round, impose a cumulative -1 modifier to leadership for any pinning tests caused by the firing unit (and afterwords lost), or to allow a vehicle to fire a seeker missile at an assumed ballistic skill five.  Be aware that due to the nature of snap shots, markerlights will not allow weapons to fire except at ballistic skill one, though I am still unsure about the interaction between snap shots and the seeker missile, but I will leave that for a further examination of the new FAQs to decide.  Primarily available on pathfinders, these weapons allow Tau to overcome their relatively poor marksmanship/low volume of shots in comparison to the armies of 5th edition.


Infantry weapons (Aliens)
Neutron Blaster - These guys saw a big buff with the changes to fleet, deep strike and the vehicle damage chart in sixth edition.  Only available on the fleet vespids, they specialize in killing marines with strength five and armor penetration five.  In 5th, fleet was a wasted rule of vespids as they would forfeit their shooting to try to gain mediocre assaults.  Now, the fleet re-roll allows them to somewhat reliably try to finish off what marine squad they shoot with assault.  Additionally, their ability to accurately deep strike allows them to get into the rear or side arc of hidden vehicles and possibly destroy them.  The drawback of this gun is that it has a twelve inch range and only a single shot on a ballistic skill three platform that doesn't respond well to being stared at.

Kroot Rifle - It's an armor penetration six bolter that gives the kroot dual armed status.  It's nice, it gives Tau their most threatening assault unit, but isn't the most threatening of guns.  If you love your kroot, expect to be familiar with this weapon.

Kroot Gun - Autocannon with a shorter range that is rapid fire on an expensive platform with little durability.  I'm not sure what the designer was going for, but this has seriously improved because it's rapid fire nature now partially negates its shorter range.  When this was written that was not the case and it really wasn't that good.  I would say it still isn't great, especially for it's price, but it's one of the few anti-tank options for Tau in the troops slot.

Whelp, that's only the infantry weapons of the Tau and I wanted to keep this post to a reasonable length.  Next time I'll have an update for you on the changes to Tau with the latest round of FAQs and then we'll delve into the realm of K-Pop to discuss what keeps me playing Tau, the weapons of suits of all types, then it's on to the special characters and how to pull the army together, unit by unit.