Coming Back From the Brink, pt.11: Devilishly Fishy 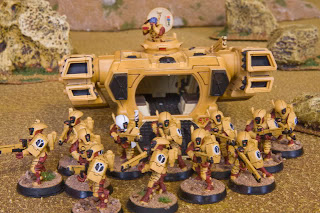 Today we're going to discuss the only transport vehicle available to the Tau Empire.  I've been on both sides of using this unit at different times and am still unsure about whether to use it my army.  It's been the key to one of Tau's classic tactics and its most sure way to bring fire warriors to an objective, but the changes to vehicles, scoring and rapid fire weapons have changed how fire warriors interact with their transport.  Have they left the devilfish high and dry?

Let's look at the capabilities of the devilfish before any upgrades.  Offensively its capabilities start out a bit lack luster, with a single burst cannon and two gun drones.  The gun drones can fire whenever the devilfish is allowed to fire at least one weapon, but must snapshot if the devilfish is shaken or stunned.  This does lead to an interesting rules question that I can't really answer: 'Is a devilfish allowed to fire a its gun drones, if it had moved at an appropriate speed, if its burst cannon has been destroyed?'  I'm interested in hearing your opinions on this one.

Defensively, the devilfish is much more considerable.  Sporting front armor twelve and side eleven, this skimmer tank will let your fire warriors cruise around the battlefield in stylish comfort.  Sorry, was a car salesman there for a second, but I'm better now.  In all seriousness, it is better protection than either a chimera or rhino, though without the benefits of being a skimmer and a tank, it is rather highly priced at twenty-five points more than a chimera.  Thankfully, being a skimmer it benefits from moving freely over terrain that it does not begin or end over and receives a 5+ jink save if it moves, 4+ if it moves flat out.

However, when we add the disruption pod, the defensive capabilities of the devilfish skyrocket.  This inexpensive upgrade has always been a part of the standard Tau armory and generally considered a slight tax added to every vehicle.  In fifth edition it gave a 4+ cover save if the vehicle was being fired on from outside of 12".  Now, it gives Shrouded given the same condition.  While on the first player turn this is the equivalent of firing smoke launchers if the Tau go second as it was in fifth, once the Tau vehicle has moved Shrouded stacks with Jink for a 3+ cover save that becomes a 2+ if the vehicle moves flat out.  Moving flat out will forgo shooting, but that is a small loss.

Looking at Tau philosophy, we can understand that the offensive capabilities of the devilfish are fringe benefits.  The Tau divide their society into castes, each with their own role to play for the greater good.  Each caste becomes extremely good at what they do and do not understand the other castes do.  While part of a caste, members can specialize further and become extremely good at a particular task.  The devilfish crews are a subset of the fire caste that has specialized in protecting their peers.  This can be either in protecting their crews or in providing cover for battle suits and troops.


The role of the devilfish as a transport is to protect its passengers, but with 6th edition, the devilfish forces its passengers to forgo shooting on the move, admittedly for a larger amount of movement than they could get otherwise.  In fifth, the devilfish with six fire warriors was my default troop choice.  Now fire warriors must disembark to hold or contest a point, so they must sacrifice the protection of their devilfish to achieve their overall goal.  These two factors leave me questioning if devilfish still have a place in the Tau army despite their formidable defenses.  I can see it being similar to the chimera, poor by itself, excellent en masse.

Next time I'll take a look at another unit that became harder to kill, but is still looking for its place in comparison to other options.

I'm Underground Heretic and I get to live with that everyday!
Posted by Heretic at 12:15 PM