Greetings and welcome to the latest installment of The Tomb World awakens! This week we cover one of the more odd slots in the Necron codex: the elites. The reason I regard this section as so odd, is that having come from previously playing Space Marines, I'm used to the elite slot being full of amazing and interesting (if expensive) choices which all very closely vie for those three highly contested slots. The 'Cron dex has this same issue, but in other slots. As it stands, the elites slot for our favorite terminator knockoffs are a bit... well... bad. They're interesting, and you can make them work, but as will be seen through the progression of these articles, much of what the elites slot does is either an awkward gimmick, or something that can probably be done better elsewhere.

The first of our awkward and unwieldy tricks are Flayed Ones. These are point for point Warriors which have exchanged their guns for two more attacks, as well as deep strike and infiltrate. Prior to last year's release of this book, these were rumored to be troops, or to have a character which would enable their being troops. This didn't happen. As it stands, they're worthwhile for tar-pitting devastators (or their equivalents), especially if you've brought one of the characters which play with their capacity to do so, but even in that there are some better options. As will be discussed in the closing article detailing characters, these have a few interactions which allow their specifics to be manipulated or improve their usefulness, but they're still pretty blah in my book. Pass these over unless you like spending the points you could spend on warriors on something far less useful. 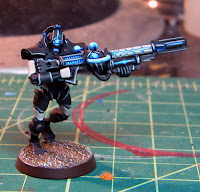 Next come the Immortals variants, Deathmarks. They're 2 points more than their base chassis and lose their weapon variants. Instead, they gain one of 40k's more unique weapons, the synaptic disintegrator. This is an AP  5 rapid fire sniper weapon. It works very well in tandem with the unit's special rules, the biggest and most special of which is Hunters from Hyperspace. When the hunters arrive on the table, they can select a unit in the opposing army. All death marks in your army wound the chosen target (or any squad they join) on 2+. They also have deep strike and an awkward reactive deep strike ability, to manipulate selection of their target, should their victim try to lie in wait in reserves. These will best be utilized in two 10 man units, or 3 5 man units. The former opens your 3rd elite slot and better allows for resurrection protocols. The latter allows for more units to be marked for death and is cheaper. Either way, this is a points sink that will allow you a solid shot at slay the warlord, and an increased capacity to harass at least one other high priority enemy infantry. Don't forget, the shots are precise on 6s and rend on 6s! These guys are interesting and one of the few things really vying for an elites slot in this codex. If you want slay the warlord, or have to deal with 'Nidzilla, these guys are worth examining.

From here we have the C'Tan. Formerly, these were dark gods of the Necrons. Now, they serve as their servants. After the war against the old ones, the Necrons enslaved the beings which deceived them out of their fleshy bodies and trapped them into soulless machines. Previously these were the only characters in the codex, but due to the fluff change, they're now a build your own monstrous creature. They've got a solid statline, at WS and BS 5, as well as S and T 7 (take that pesky xenos and guardsmen!), though the T 7 is a bit overshadowed now by the ability to flee combat against a foe you cannot help to harm. Additionally, they have a built in 4+ invulnerable save. The initial points cost is just a hair shy of 200, but given that you he has to manifest at least two super powers, he'll more typically clock in around 250, which is a hefty chunk of change. These manifestations range from the mundane "lots o' shots" powers, to lascannons, character hunters, and a few worldbending abilities (did someone say hostile terrain?). Some are good, but most are situational, meaning that bringing one will involve some tailoring to your play area. It's hard to rationalize this entry when wraiths exist, but nevertheless, it's interesting and makes for some fun lists and tricks.

Next we have the replacement for the pariahs of old: Lychguard. These are sort of the "termiantor equivalents" of the codex. 40 point models with power weapons, two attacks base, and reasonably high durability. They're on the lord chassis (S&T 5, 3+ armor save) and the whole squad can take either warscythes (scaring off I1 deathstars and xenos like the plague) or can take a power sword and dispersion shield (for times where you fear something dealing with their T5 and 3+ save before their I2 swings). First note that I said that the whole squad could take either option. The robots, even at the higher castes have a bit of a habit toward acting in unison. You cannot mix and match weapon options here. Next to note is that dispersion shields are almost storm shields, but not quite. They only confer a 4++, but they do have the nifty reflector rule which allows any successful invulnerable save taken to reflect a shot with the same strength and AP as the one saved against at an enemy unit... within 6"... This is wonderful for making sure they enemy feels the pain for trying to stick it to you, but you need to get close enough to make it count, probably through use of Night Scythe or Monolith. On the whole, the squad is interesting but feels conflicted. You can either be durable but only AP 3, or be AP 1 and fear anything with AP 3 or better. 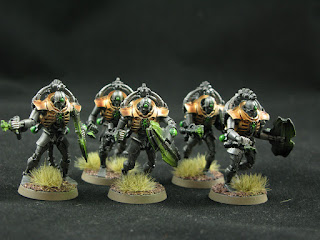 Next to last, we'll look at the variant Lychguard, Praetorans. These guys cost the same as Lychguard, but have forgone an attack to gain jump packs and they've sold their good weapons for bad ones that can shoot. You can either all keep your rod of covenant, which is a power axe that shoots a 6" 6 2 single shot, or you can swap that out for a void blade (rending and entropic strike) and a 6 5 pistol. If I had to run these, it would be in their dual armed configuration. Generally speaking though, I wouldn't run these. The models are interesting, but in execution, they're just bad wraiths. 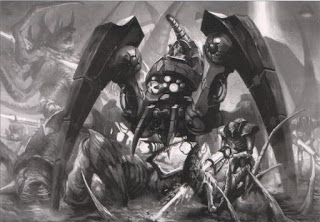 Our last entry is the odd man out, a walker, the dreadnought equivalent, the Triarch Stalker. It's got the usual vehicle rules, such as quantum shielding, open topped, and living metal. No dreadnought close combat weapons, but the guns are mostly good. The default is a heat ray, which is either a heavy flamer or a two shot multi-melta. The multi-melta is nice because it means the stalker is operating at the same effective range as the rest of the army, but unfortunately, the melting works both ways, and anyone who brought teir own will quickly slag your robo-spider. Next comes a particle shredder, which fires an autocannon large blast. This is very effective at purging the vile eldar, but gauss immortals do that really well too. Finally, we have a twin-linked heavy gauss cannon. A twin linked lascannon? It's not bad by any means, given that it's got one of the longest ranges in the army, but the unfortunate expense is the chassis it's mounted on. A vehicle with a lone twin linked lascannon is just begging to draw enemy firepower. Even so, I'd still opt for either this or the heat ray. Why? because these weapons do a good job at getting hits, and hits are what you want to ensure that your targeting array hits. If the stalker hits something and for some reason it is left standing after all is said and done, the entirety of the remainder of your army becomes twin linked when firing at that target for the rest of the turn. It's an amazing rule, but given that its weapons are pretty lethal, the array is almost negligible, forbidding the big beastie lives late into the game and something simply has to die. On the whole, it's alright, but I feel the points are better spent on outright firepower.

So, that sums up the elites selection! Hope to see you back soon for the next slot: fast attack!
Posted by Corvus Sanguine at 2:37 PM