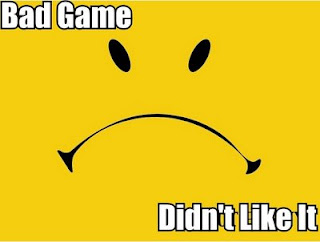 I've been thinking about a concept for a while and Son of Horus and A. brought it up in a way that I think framed it well.  Specifically, I've been thinking about what it means to have played a good game.  Saying "good game" after a game wraps up is almost obligatory in gaming and sport but, if we want to figure out how to grow and improve our hobby, we need to understand what we mean when we say "good game."


Full disclosure time, I come from a diverse gaming, sport, and academic background.  I've played defensive line, wrestled, and ran track in high school and I can tell you that even when there were a lot of the same people on each team, the attitude was different each season.  When I came up to university I was introduced to gaming and took to it, thanks to people like Ishmael and Godfrey among a dozen others and the attitude was much different.

While I was in sports there was a coach who ordered us all to improve our performance. Normally I chafe against authority directing individuals, but I didn't when it came to sport because alongside that authority telling us what to do was an individual drive to improve ourselves.  The unity of desire to improve was what made our team into something that was even decent, and I miss that attitude sometimes.  I didn't like losing, but on the gridiron and the wrestling mat I didn't see the match as about who won.  I tried to win to help my team, but for me it was about the agon, the contest that pitted will against will.  If I was able to say I truly put everything I had into the match I could hold my head high.

When I first came into gaming I was introduced to a very casual environment of Magic and Warhammer gaming.  I remember seeing decks that were designed to repeatedly attach and detach enchantments to return creatures to their owner's hands and decks that tried to create thousands of squirrels.  These friends would throw in cards just to see what they would do; one game lasted three hours because everyone had to choose every target randomly. These were people who just loved spending time with each other and brought cards to have something to do.  My joy in watching them was to see the interplay between decks and the comedy that happened with my friends.

I've seen a lot of types of gamers since then and I've changed myself.  I don't see that these two attitudes are necessarily in conflict, but they tend to be viewed as such.  Son of Horus said this in the comments to my last article, regarding tournaments: "if you win, then that's great, but it's not something you should focus on at the exclusion of all else, and particularly not at the exclusion of other people having a good time."  I agree with him on both points, but with some conditions.  I agree that tournaments, on the whole, are not about winning so much as socializing, but I disagree with him about the games.  I see a tournament game as a situation where you test the skills you've developed and pit your mind against the mind of your opponent.  Dice confound this effort, but part of the test is how you adapt to adversity.

In regard to how you relate to your opponent, I think that's a very difficult matter to quantify.  We all have our own idea of what a "good game" is, so it's hard to understand what you opponent is looking to get out of the game.  We all know about the Win-At-All-Costs (WAAC) gamer; we've probably met someone we would call a WAAC player.  The problem isn't that these people want to win, or even that they want to try to crush their opponents on the gaming table.  The problem is how they act to reach that goal.  WAAC gamers have a reputation for being curt and browbeating their opponents to win any dipute.  I support these gamer's desire to come out the victor, but I do not condone their attitude in doing so.

Any gamer should treat their opponent better than they would like to be treated themselves, whether or not they expect to receive the same treatment.  I will play to win, but winning has no value if I cannot say I acted honorably throughout.  I think we can accept all types of gamers in our hobby as long as we can agree on a code of etiquette for gaming and try to align our expectations.

I'm Underground Heretic and I get to live with that every day.
Posted by Heretic at 4:05 AM