40k in the Shadow of the Colossi 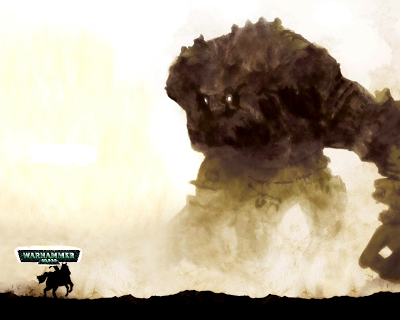 Hello everyone, Godfrey here with a look at what is happening to the scale of 40k.  While normally, my talk of scale is based around the point level at which we play this game, today I'm going to take a look at the scale of the miniatures being pumped out by Games Workshop.  It's hard not to have seen some of these new models as they tend to take up quite a large amount of space on the table... at least in terms of vertical scale.

The first of these new scale of models, what I am calling the harbinger of Colossus class units was the Tyranid Trygon/Mawlock kit.  This model occupied a huge space at the time, and where the Carnifex was already considered pretty large, this new beast stands at average about 2.5 fexes tall.

Next in line, we see the Dreadknight.  This monster was considered ridiculous as it brought a 2+ save and the ability to be classified as a "jump" unit.  While the scale in terms of proportion wasn't greater than its predecessor, the rules were leaps and bounds ahead of the curve.

The first few armies we saw come about from 6th edition were not especially different in terms of the models they introduced.  Admittedly, Chaos has had a fairly bulky model in both of its CSM and Daemon books in the form of the Defiler and it's close cousin, the Soul Grinder.  While these models are indeed very hefty in scale, their limited abilities on the tabletop kept them from seeing play too frequently.  While the Defiler and Soul Grinder defiantly being worth their points with the coming of 6th, more so to the latter as it gained some much needed utility with Skyfire, they have never really seen the table on a large scale.  Because of this, their existence has been relatively ineffectual on the game itself. 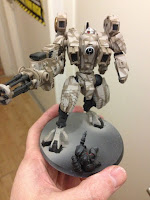 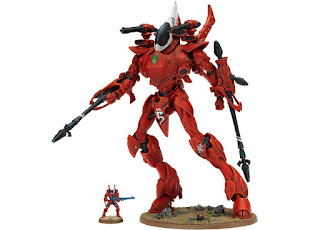 Fast forward a few months, and we saw the coming of the new Tau codex and therefore the Riptide.  Admittedly it isn't as big as the Defiler in terms of space it actually takes up on the 6x4 space, however it dwarfed almost every other model with some ease.  Because of the "True Line of Sight" rule, this vertical scale allows the model to get around a fairly sizable amount of balance factors we have had established for a while.

Now, moving even closer to the present, we see the largest model we have seen GW release to date.  The Wraithknight.  This behemoth stands at an unprecedented 8.5" tall.  This increases to over 10" if you count the weapon if modeled vertically.  This is interesting as a Warhound Titan stands a mere 3" taller at this point, meaning we are very much blurring the area where 40k stops, and Apocalypse begins. And with the new rules for Apocalypse on the Horizon, I have to wonder of much of this "Bigger is clearly better" mentality will make it's way into the new units coming from GW for that.

While the units are impressive to look at, I'm a little nervous about what it means for the game.  We've seen another similar game attempt something very similar to this in the past when Warmachine added the colossal units to it's game.  These units are still being banned at many tournament level events because of their sheer power and because of this, we have units that people may purchase and then are unable to use, and with prices continuing to increase further and further... I can only see these units as being investments made by the company to develop, only to see players realize they are too damn good to allow on mass scale.

Now 40k players will have a little more freedom here, as most units are protected by the conceptual rule of "it's legal if it's in the codex" approach.  Even most approved Forgeworld units are starting to see inclusion in the event circuits.  But these new models and units have been getting more and more impressive with every new release.  6th edition made the walker a negligible choice to consider, as they are slow, and still vehicles... thus they die very quickly.  However, now we see units like the Riptide and Wraithknight that have gained the jump, monstrous creature rules, and boast incredible output potential, with their only real balance being the cost of running them.  They are expensive both in terms of cash, and points, but they will almost always net those points back, and more.

So what does this mean for the game?  How will these new Colossi effect the game, and the other, less huge units we are used to?  Are the missions we have now balanced when we start seeing these monsters fielded more prevalently?  All in all, with flyers, and huge creatures walking about... I can imagine Apocalypse is going to be made huge in the wake of these new changes.
Posted by Godfrey at 2:18 PM