Guest Article: The Heresy in the Library 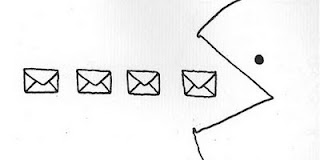 Greetings and salutations everyone.  After a long silence, the Rites of Battle inbox light popped on.  A friend of ours has decided to take a crack at writing for the blog, and having read through this article, it's a great insight and review of some of Black Library's Horus Heresy series.  This Guest Article is brought to you by Trooper.  Hope you all enjoy it.


The Heresy in the Library 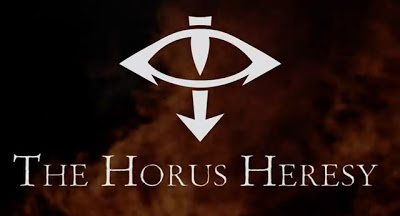 Hello there to the good readers of the Rites of Battle.  I am coming to you with a guest article, but it occurs to me that, for all of my lurking and occasional posting on the blog, that I do not have a name to represent myself. Therefore, you may call me Trooper.

I am coming to you in what I hope will be the first part of a two part series in which I take a look at the current trends within the Black Library publications, both to where they came from and where they are going. I count myself as well read and, for good or ill, have read most everything the Black Library has to offer. Yes, that does include “Space Marine” by Ian Watson.

So, for the first part of of this series, let’s focus on what is arguably the most popular and well received publications to come out of the Black Library; The Horus Heresy.

In 2006, Dan Abnett penned the novel Horus Rising, Games Workshops first major attempt to explore the Horus Heresy. The Horus Heresy, for anyone who is not familiar (and who could not have heard of it by now?) was the catacysmic betrayal by the Warmaster Horus, who lead fully half of the Space Marine Legions into rebellion against the Emperor ten thousand years before the current date. The fallout resulted in Big E being put on the Golden Throne and giving us the years of grimdark goodness to play our hobby in. The novel itself is an excellent look into what it might have been like to live during the Great Crusade, exploring the Luna Wolves Legion, the Remembrancer Order, and the Primarchs themselves. And the opening of the novel sets the tone for the rest of the series, telling us that the Heresy, when it happens, is going to effect everyone.

“I was there the day Horus slew the Emperor.”

The series does a very good job of exploring multiple viewpoints, from the lowliest serf to the Primarchs themselves. Everyone has a role to play, whether they like it or not. To this end, the current publication can best be split into three sections; Before Istvaan, After Istvaan, and the current and upcoming section, Imperium Secundus.

The first section, Before Istvaan, largely expands the fluff of the legions before the Heresy erupts, covers the Council of Nikea (where the Emperor banned the use of Librarians), and the Scouring of Prospero (which is covered in two books; A Thousand Sons and Prospero Burns). These novels cover the same period of time and do a very good job at bringing the universe to life at every aspect, paying particular attention to Horus’ corruption and his plans to bring about the ruin of his father’s empire. Lesser known aspects are also explored, such as the Mechanicum of Mars (which features a few key hints at the future of Mars in the 41st Millenium) and the Assassinorium, which features the major Assassins temples that many of us know and love today. The first section also begins setting up what I would consider to be the big meta plot of the series itself in Legion. There is a lot going on behind the scenes and it gives the Alpha Legion some much deserved and needed limelight. But the big name to remember from this book is one John Grammaticus, who will become one of the most important recurring characters throughout the series. What he does and who he works for become major players later on in the series and their involvement directly affects the series.

The section concludes with the battles of Istvaan III and V, with several stories footing the bill to explain what happened in between Horus’ betrayal at Istvaan III and the Dropsite Massacre on Istvaan V, with minor stories from before and after. Excellent selections would include Tales of Heresy and A Thousand Sons/Prospero Burns. Selections to take with a grain of salt would be Battle for the Abyss and Descent of Angels/Fallen Angels. Ultimately the beginnings of the series are strong and lay the foundations to expand upon a lot of lore that has only been hinted at or briefly mentioned.

The second section of the series, After Istvaan, describes how the Imperium of Man reacts to not only Horus’ Rebellion but also to the Dropsite Massacre. The books, beginning with the Age of Darkness anthology, are simply excellent pieces of fluff. The Outcast Dead describe the utter chaos that engulfs Terra as news of the Dropsite Massacre at Istvaan V causes massive panic for every Departmento and the common person (with some excellent tidbits of even more obscure lore!). The Primarch’s also get some love in the second section, with two reaching Daemon Prince status, Corax rebuilding his shattered legion, Sanguinius and his legion being tested, and Roboute Guilliman actually being developed as a character. Know No Fear is a particularly riveting piece and the Battle of Calth is, in my opinion, some of the best writing to come out of Black Library. Know No Fear also expands upon the meta-plot established in Legion, giving us further insight into the work of John Grammaticus and re-introducing a character that many oldschool 40k players may recognize; Ollanius Pius. He has a re-imagining and a simple nature, which is different from how has been portrayed. Whether or not he will “come into his own” remains to be seen.

After Istvaan has no good cutting off point before entering the next section, as Shadows of Treachery, Angel Exterminatus, and Betrayer focus on the renegade legions fighting across the galaxy and wreaking destruction! Vulkan Lives, the latest installment in the series, continues the meta-plot and reveals something very interesting about the primarch of the XVIII Legion and, at the end of the novel, places him squarely in the realm of Ultramar with a new purpose after the devastating loss at Istvaan V. The second section is rife with combat, expressions of betrayal, and is very focused on the Legions, with little to no room given to any “mortals”. Surprisingly, this doesn’t detract terribly much from the overall plot.

This brings us to the upcoming section of the series, Imperium Secundus. Interesting title, wouldn’t you say? After the events of Know No Fear, the realm of Ultramar is sealed off from the rest of the Imperium and Guilliman, fearing the worst, begins setting Ultramar up as the “new Imperium”. With Sanguinius arriving at the end of Fear to Tread and Vulkan arriving at the end of Vulkan Lives, he sets out on a path to secure his realms borders and ensure that Horus does to triumph over him. The Unremembered Empire, the next installment in the series, is due out in 2014 and promises to launch a whole new chapter in the series.

So what has the Horus Heresy series done these past seven years? Several books have reached the New York Times best sellers list and the series has been very well received by critics and the success of the series has encouraged Games Workshop to explore what is now being called “30k”. Forgeworld has released an entire model line based off the series. This includes Legion specific squads, super heavy Legion tanks, specialized units, and the Primarchs Fulgrim and Angron. For a time there even was a short lived collectable card game!

The future of The Horus Heresy family, specifically the book productions, remains bright and hopeful. Despite a brief hold on new book production, books and novellas continue to be produced to fill in the gaps and ensure that, when the next line of books drops, they will be ready. If you haven’t checked out the series yet, I would definitely recommend it. Have a favorite first founding chapter? Check em out! Have some fluff you’re interested in? CHECK IT OUT!

And with that, good readers, concludes part one of my examination of the current Black Library publications. This is Trooper, concluding my signal.
Posted by Godfrey at 1:27 PM