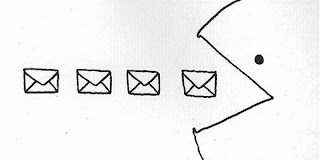 It was one of those moments of such mixed feelings when the Sisters of Battle received their new codex throughout the entire 40k community.  While most armies receive a large amount of time on the GW website's front, and snag a bunch of fancy new printed books, models, and such... this update came not with a bang, but rather a wimper.  The models have still yet to be updated, or even converted to Resin or Plastic, leaving many confused as to the reason for this sort of half-update.  However, it is a fine move for anyone who has the army as this has made the army a bit more relevant on the large scale.

I had planned to do a review just to give a quick idea of what we could expect to see from this book, but before I could write even the first few thoughts down in a draft, Brother A. came to us with the first part of his own review, and asked that we publish it for him.  So it's off to another Guest Article, this time delving into the newly revised Sisters of Battle. 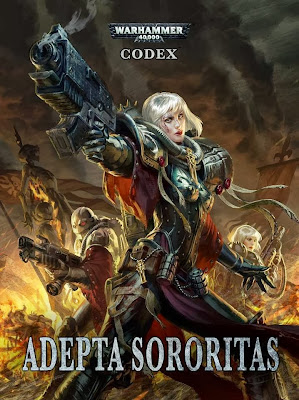 Introduction
We march the hymns of the Ecclesiarchy!

Sisters of Battle players have prayed for a real codex. The prayers have come true! The time of the Adepta Sororitas has come!

The Adepta Sororitas is mid-ranged army that specializes in Holy Trinity: Bolter, Melta and Flamer. These ladies are armed with the finest weapons in the Imperium, Power Armor and the ability to use their faith as a weapon to smite their foes. Each unit in the Adepta Sororitas has an Act of Faith they can perform that allows them to increase their abilities and devastate their enemies.

Now let’s get right into this review as this codex has brought numerous changes to the army! 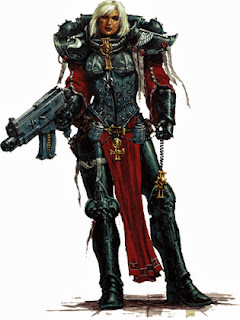 Adepta Sororitas did not change much in the way they are played with this new release. They are a mid-ranged shooty army with almost all of their weapons being 24” or less range.

What makes this army unique is the fact that each unit in your army can perform an Act of Faith that grants them bonuses. Rending Heavy Bolters? Sure! AP 2 Flamers? Sure! Relentless and move through cover? I got that! Aww that’s cute your hiding behind a bolstered ruins with your 2+ cover save? I’ll ignore that! This is where the army truly shines!

The Adepta Sororitas does not believe in Las technology and as such do not have access to Las-Canons and the like. They do however pack a tremendous amount of AP 1 in the form as Meltas and Missiles to turn any mechanized list into molten slag (and a just about anything with an armor save). Oh and did I mention standard issue for these gals is power armor and a bolter? Hell yes!

Another strong point is the ability to take so many flamers that it will make any pyromaniac happy. Being able to take five flamers in a single squad is no laughing matter after all. Imagine AP 2 Flamers…yes, It is completely possible with this army.

The main weakness of the Adepta Sororitas is that they are all T 3 and are not very good in close combat. They will perform slightly better than a guardsman. However, with the right HQ and war gear they can hold their own in close combat but it won’t beat out anything above a tactical marine in most cases. HOWEVER, if equipped with a Preacher…I say YES! We also have no Anti-Air aside from an Aegis Defense Line. Ouch…

Special Rules
Shield of Faith- EVERYTHING in your army has 6++ and Adamantium Will. EVERYTHING! Including your vehicles!

Martydom- When your warlord is killed your entire army can automatically pass their Act of Faith the following turn. Period.

Warlord Traits
New to this edition of the codex are warlord traits! Must I say DAMN some of these are absolutely beautiful! The only one I can see being situational is the Adamanitium Will one.

Good for challenges...not much else. But you’ll probably be in a challenge with a Fearless opponent anyways… So this is an odd one.

Depending on whether or not you’re Warlord has a 4++ this trait is not so great. However, if you’re taking a Command Squad this ends up being amazing. I’ll take a Terminator ++ save any day!

·         The Warlord and unit may re-roll Adamanitium Will saves

Good if you’re playing against Physic armies. Other than that it’s worthless.

This is probably the 2nd to best one you would want to get. The less you leave up to chance with your plan the better. The chance to turn the tide of battle is guaranteed with this trait without fail.

This pretty much says I’m not moving off my objective! Great for objective holding games though there is a relic that has this same trait. Double up with this to get 24” of Stubborn! 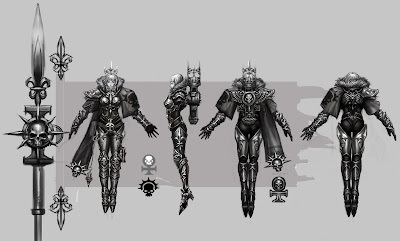 Cloak of St. Aspira – Re-roll Armor saves/ invulnerable saves
Sure! Every HQ wishes they had this! Grr if only I could take both Cloak and MAtle..its a hard choice!

Banner of the Sacred Order- 12” Bubble +1 attack and re-roll leadership saves
Put this smack dab in the middle of your army and laugh at your opponents attempts to break your army.

That ends Part 1 of Faith and Bolter! Ceya’ll next time!
Posted by Godfrey at 11:14 AM