Catching up with Corvus

Greetings all! It has been far too long since I've had the opportunity to post here at Rites of Battle, and I'm here hoping to rectify that with this, a peek into the Raven's nest. There's a list here, and more than a couple photos of my recent hobby workings, and a few musings about the road before me. So, strap in for an article that has more soul than science. For readers who loved my HtC series, this will feel very very different.

So, just to clear up the elephant in the room, I am "done" with HtC. I might return to it if the book gets a third supplement and pit them against each other, but otherwise, as it stands, I'm as "fed up" with marines as many readers, and the "closing thoughts" of the series are in the next paragraph, paired with a list. If you're "over" the big blue book, party on past. 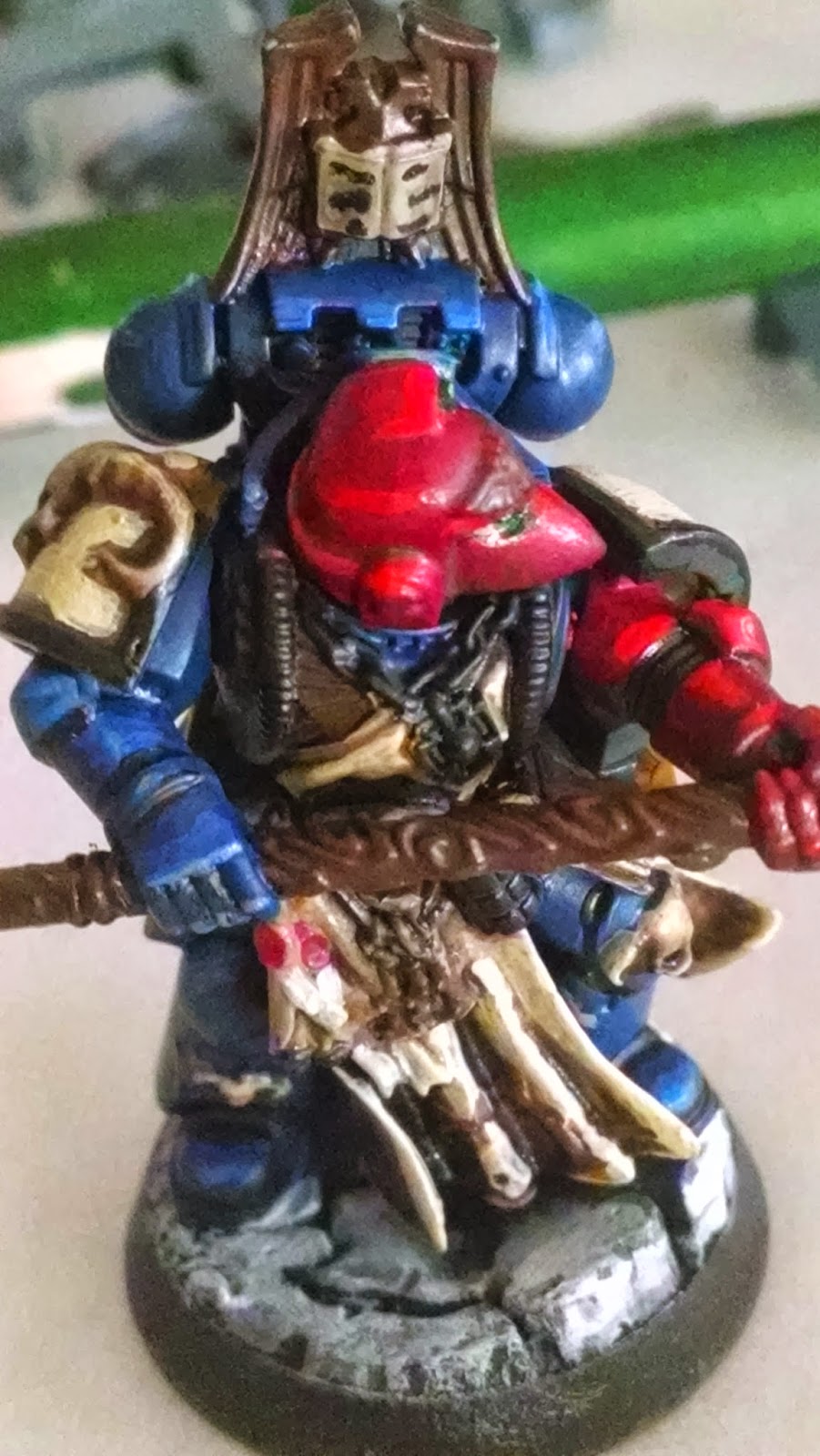 That's where I've "settled" for the moment. My first pass list spent too many points inefficiently (choppy biker command squad using Ultramarine Tactics), and my attempt at running a full fighting company left me battered and bruised (though narrowly victorious, 70 power armor dudes vs two riptides and a heldrake is rough). The grav based list performed very very poorly (suffering multiple hard losses to daemons) and the company was an absolute bear to play and it affirmed my assertion that assault marines and devastators simply don't work for me. That said, if I get less afraid of the meta and decide to run Coteaz and some of my Eisenkern, I may return to devastators (woo Imperial Fists), but as it stands, Tiggy is the biggest reason I'm continuing to play the book. You'll also notice the TFC and the Stormtalon. They've been making top 8s for marine lists and they are just that good. They're both fantastically cheap and do exactly what you need them to do, shred hordes and devastate light mech. Heavy mech can be handled with some melta outlets (see my elites choices), and it really does work. Again, tinker to your meta and tastes, but this list has proven successful and "hard but fair" against Havoc's tournament list of Farsight + Tau, mostly due to finally living up to the core principles of my review. I killed his troops and my nonscoring choices were threatening to stick him with a horrible choice. Also critically undervalued in my review was the Firestorm Redoubt. "If it flies, it dies," and it bunkers a devastator team in AV14 while allowing them to fire as well. 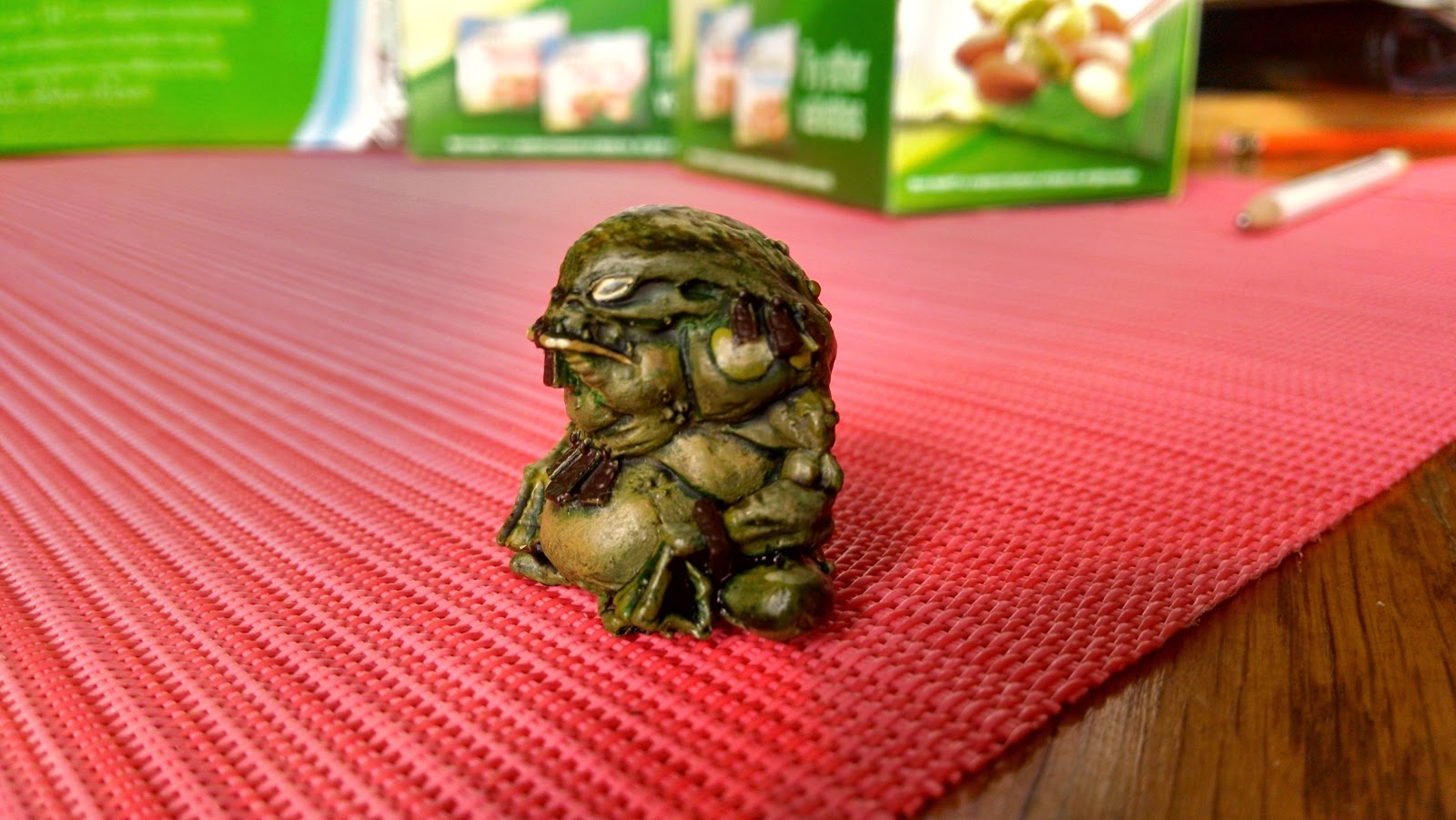 Moving away from marines, we come to my fantasy plans. My Slann is being painted as we speak for my unorthodox Lizardmen army. They're going to be desert themed rather than jungle, meaning my skinks will be chilling out in and around oases. The intent with the Slann was to make him look old and leathery, sustained only by his connection to the acrana. I had toyed around with Tomb Kings, but wasn't entirely able to build multiple satisfying lists out of the army book, which is something that the lizards did offer me. I'm excited to get into another system, especially with 40k "crashing" for me. I may yet return to TKs depending on how I like Fantasy, or should they get updated, but until then, DINOSAURS! 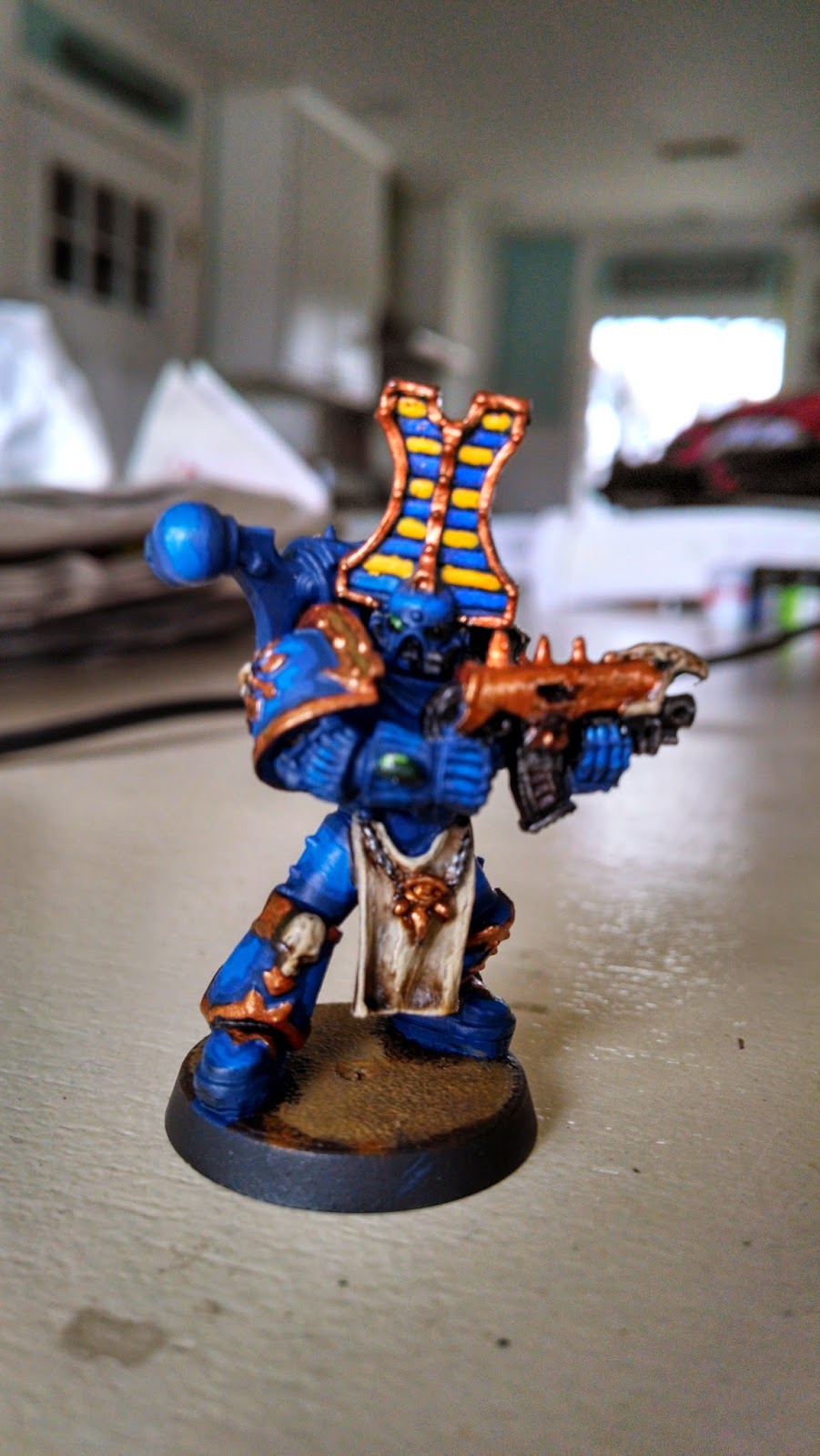 What I mean by 40k crashing for me is that after 6-8 months pretty much exclusively playing my Ravens, I'm beyond burned out on them. It's somewhat disappointing considering my recent purchase of a Knight (who is still in box on sprue as of this posting), but I'm just so fed up with their under performing so consistently for so long, never mind the chore of hauling them around (owning every option is a chore to haul to my FLGS, but people like seeing options). Add to that the Tyranid codex not offering me what I had hoped it would, both halves of Chaos being updated (more on that to follow), and my Necron update being 18-24 months out, and there's just not that much for me too look forward to in the grim darkness. I'm trying to take it in stride and take the time to get into fantasy, focus on my career hunt, and finally paint my 10,000 points of Space Marines (yes, the company is that big and growing slightly), but nevertheless, my list of 40k prospects is slim.

The bit on Chaos though is simultaneously most exciting and most depressing to me. Working with Comic Cave, my FLGS, we have begun an Escalation League. Starting from 500 points, all the way to 2k, going 250 points a month (courtesy of a huge boom in new players!), I will be playing... Thousand Sons. And it is easily the worst list I've ever run, especially at 500 points. I own most all of the models (finding myself long term only short two rhinos, a vindicator, and a box of screamers), courtesy of having had this list drafted since Daemons dropped, and working toward it as a "labor of love" to fluff and models. I "true scaled" the power armor guys, and decided to use a Tomb King Necrosphinx in place of a Maulerfiend, just to play up the Egyptian theme. Each model takes me something around 4 hours to paint, but it really has solidified that notion of a labor of love. 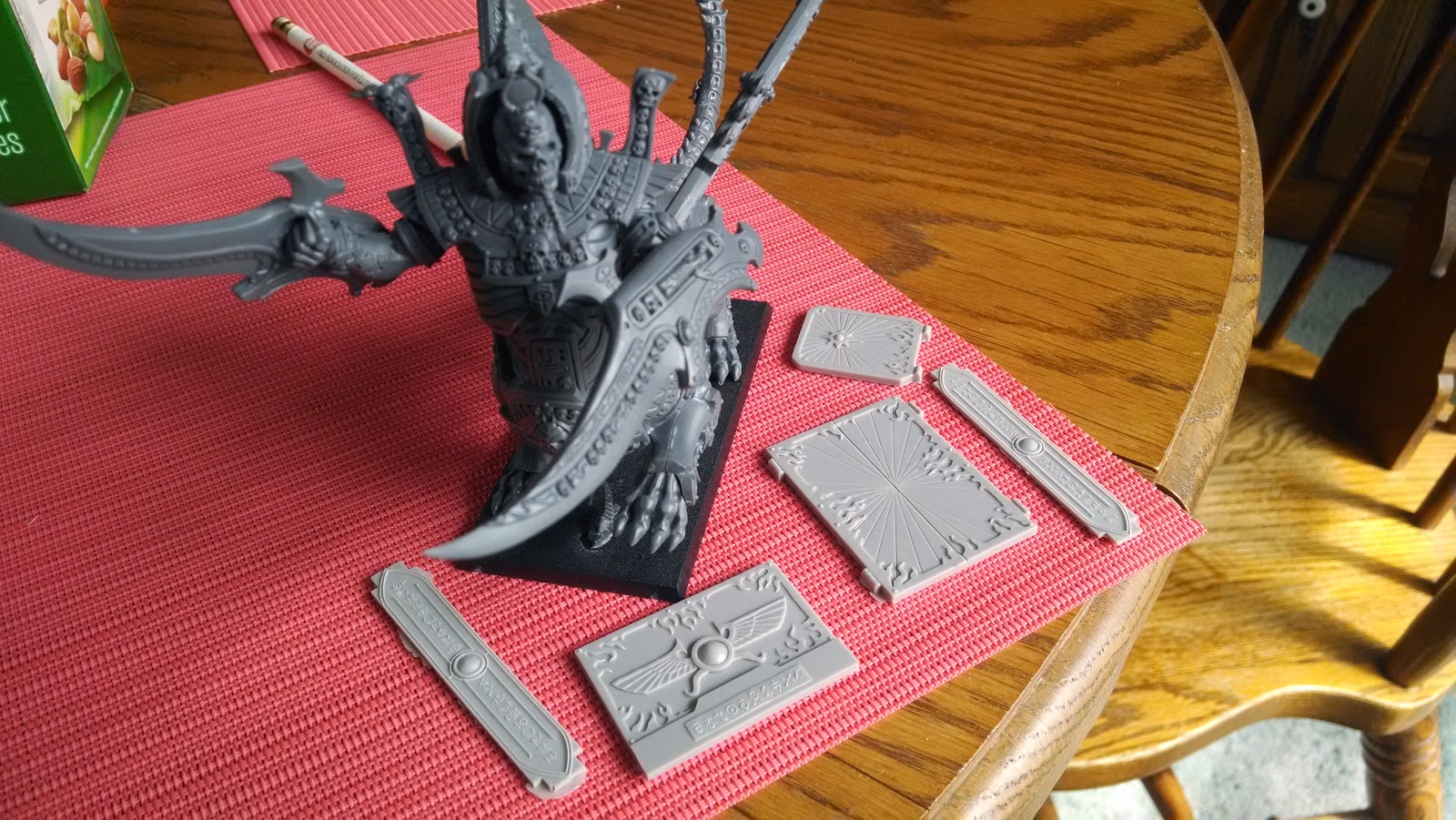 I've certainly also been dipping into Kill Team (it's absolutely that good), and have had other store members attempting to jump start Dropzone Commander. The biggest gap in my life is a lack of reasonable or significant RP opportunities, but I'm working to overcome that with time spent streaming and playing a lot of video games I haven't gotten around to (FarCry 3, Saints' Row 4, Titanfall, Mass Effect 3). There's still a hole I wish big blue filled, but I'm experimenting with a return (partial or otherwise) to the Space Wolf codex, especially in the wake of Godfrey and I discussing it for his latest piece on it.

With all of that said, I'm gearing up for some delightful shenanigans at The Wizard's Keep in Muncie tomorrow. 1850 points and wonderfully unique missions, sure to be a blast. Hope to see some of you there! Starting next week, I'll be back with Let's Be Friends! - Eldar. See you then!
Posted by Corvus Sanguine at 1:53 PM