Welcome to the next installment of my Tru-Scale project.  Today we'll cover something which more or less defines a Space Marine both in aesthetic and durability.  The various types of armour which the Adeptus Astartes wear may differ in their design, color, and even shape.  But they all serve to keep them alive long enough to pass judgment on the enemies of mankind.  That said, I have always been a little underwhelmed by their staying power on today's battlefields of the grim dark.

You see, a long time ago, models used to cost a significantly larger sum of points just to field.  On top of this, weapon upgrades and powerful special and heavy weapons likewise were more expensive.  Over the years, their prices have dropped pretty radically over the initial days when the foundations of the game were laid.  Because of this, the base design of what makes a Space Marine "durable" has fallen away somewhat.  I can't argue that the reduction of points hasn't lead to more interesting fights.  Back in the day it was a lot of mundane weapons with a few specials and heavies sprinkled in, which were crucial in determining the victor.  In a way, it's much like the change from DnD 3.5 to 4.0.  Combat in 3.5 was a little slow because you just needed so much to meet the roughly top 1/4 section of the D20 before you actually started hitting things.  Then came 4.0, which really energized and sped up combat.  But that said, I'm a much larger fan of the 3.5 system.

The point here is that Space Marines are beginning to feel their age, not as an army, but as an army concept.  The "Elite" armies, i.e. those which trade quantity of models for a few powerful models, are really feigning under the current rules.  The ability to just throw a massive surplus of models, and therefor dice has all but beaten out the old mentality of being able to have a few models or dice which work more frequently.  The more basic understanding here is that Elite armies suffer more from poor dice rolls than those which throw enough crap to cover a wall in said crap, regardless of individual accuracy.  So because of this, we see what has become the bane of the Space Marine not inherently those weapons which should level them (such as a Lascannon), but rather sheer volume of fire (such as a shit ton of Las...guns).

But wait a minute,  Does this really feel right?  Should Marines fall over in whole sale numbers just because the enemy fired a lot of crummy lasers at them?  The Answer is two fold.  No... because there shouldn't be enough marines on the table to be considered a "whole sale amount" in the first place, and Hell No... because it's not really what represents the Space Marine.

So, without further delay, I'm going to give you my Tru-Scale version of Space Marine armour.  The main idea here is that these models shouldn't die in droves to small arms fire, though it can pick them off if they aren't careful.  Like-wise, the Terminators net some really high durability.  With these models designed to clock in around 100 points base, and the Terminators being even more so... the rules for their armour should help keep 'em alive long enough to put up a good fight. 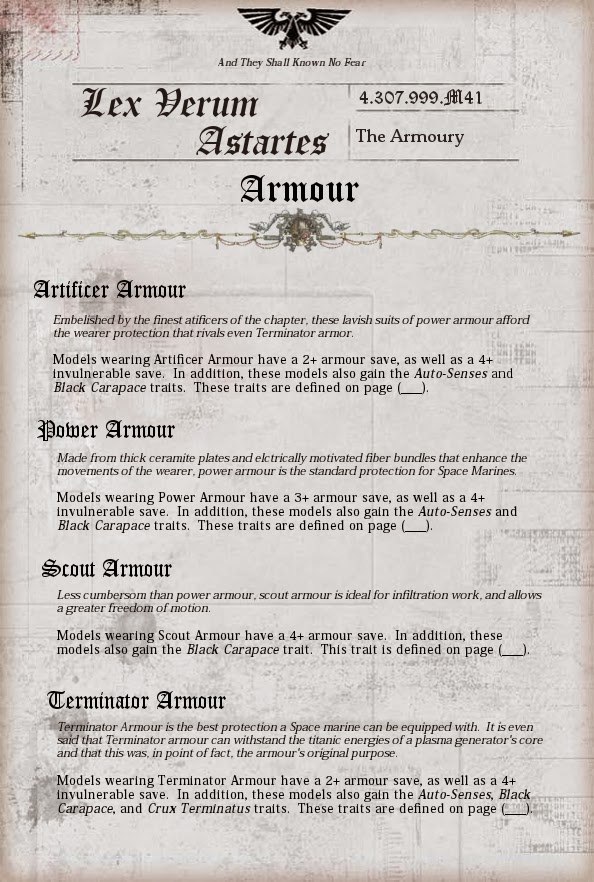 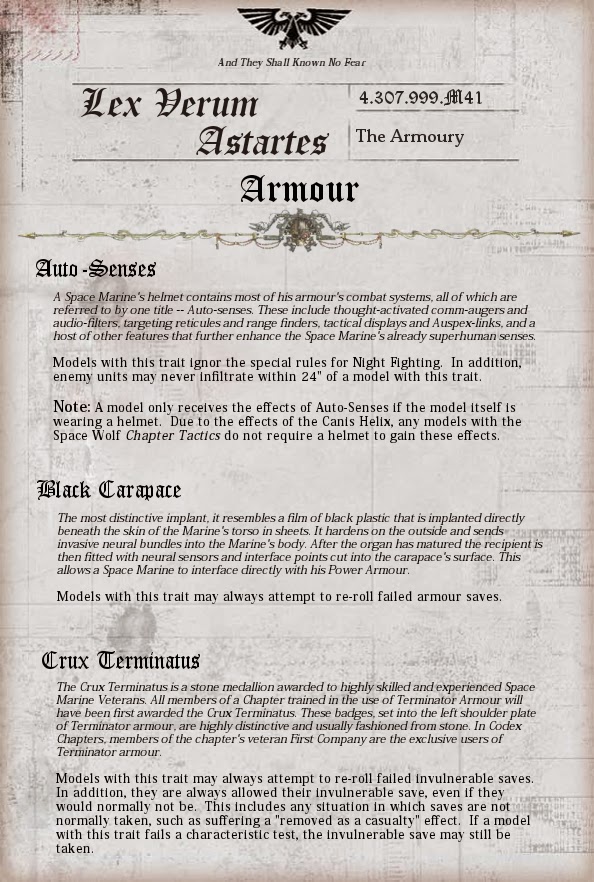