Imperial Overload in the Grim Darkness 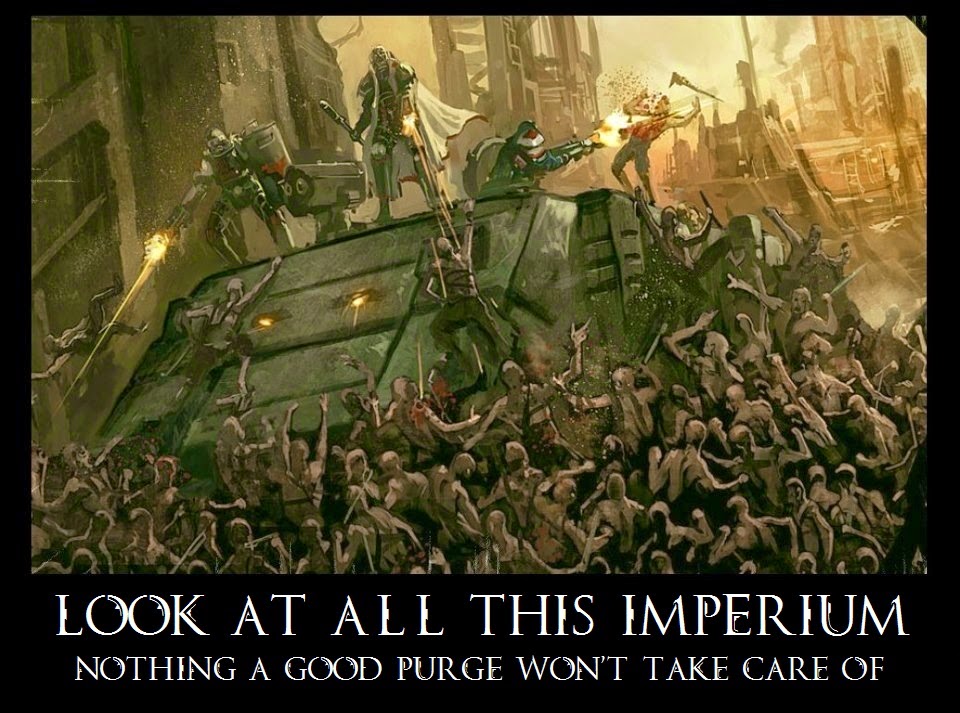 Well well, welcome back to Rites.  I find it quite amazing that folks were able to get here given how many new releases and distractions there are these days.  Don't get me wrong, I am absolutely grateful that the game flourishes enough to merit expansion.  And before you begin to roll you eyes instead of the dice, I promise this article isn't beating down the idea of how much is being added. While yes it does make for a complex set of things to remember, the ever expanding volume of content does provide us several new ways to build our own experience.


No, my real point here is exactly what the title should lead you to expect.  It's not the volume... it's the sheer amount of how much of that volume bears the Imperial Aquilla.  Quite honestly it's becoming a rare sighting to see new things that come out that belong to any of the many other races and factions that make up the Grim Darkness.  It's not that these releases never occur... Looking at the Harlequins jumping into the scene (and relatively out of no where I might add). These types of releases expand the setting, and honestly it makes sense for them.  Given that they can really be taken by either of their law abiding or sinister brethren, it works nicely and provides those armies with some some unique elements which don't exist within their own publications.

In a sense, the Eldar are like a very miniature version of the Imperium.  Since they are different armies, and ally best to each other, this new sub-army really helps bridge that gap and makes the Eldar race feel more cohesive.  And it's this factoid that causes me at least a little bit of bother. Mainly on the following two fronts:

1.  The quality and diversity of the units provided by these releases.

2.  Of course, the number of these releases which belong to the already vast Imperial forces.

There is no better example to both of these points than the release of the Legion of the Damned.  Now of course, I understand this was more or less done to allow those armies which don't exist inside the Codex: Codex Astartes to have a glorious intervention from these Burning bad boys.  But that said... there's nothing in this publication. It's nothing but the single unit that already existed.  I just don't get this.  They took the time to give the army a warlord table... but didn't even bother giving the army a character to take up that mantle.  It's just not much to really merit being a codex.  The same could be said for several of these new releases.  Things like the Harlequins really show how these releases can benefit the game and the other races (good friends or not).  They provide nice options and present new tactics for players.  And I'll grant that at some of the "lesser" releases have been further augmented by later releases. Look at the Imperial Knights.  What was once two units, has been bolstered to nearly 8 thanks to Forgeworld.

And this is the biggest culprit for my second point.  Forgeworld.  No one can contest that the Horus Heresy has begun to tell a grand story based in probably the most pivotal moment in the written lore.  I say written lore because huge and catastrophic events have happened to other races.  The war between the Old Ones and the C'tan.  The birthing of Slaanesh and the fall of the Eldar. Even moments that happened between the Heresy and the current time period.  But at any rate, the Heresy has really added a huge expanse of new and interesting weapons, rules, vehicles, and even the Primarchs themselves to make the game feel unique and showcase the "Golden Age of Technology" ended by the Heresy.  I myself am looking to get into the game of 30k myself.  But what gets me is the effect it has on the game of 40k.

These effects have been carefully restricted using the Relic of the Armoury rule.  It helps to keep these unique units kept to at least a minimum.  But the point remains that the Space Marines, one of the most broad and expansive of all the existing races, spreading across several codexes and Forgeworld books as it is... are now getting even more options.  This doesn't include the new armies being added to the fold.  The Mechanicum are already in full swing, and new armies are on the horizon (the Custodes [my personal favorite!] and the Sisters of Silence). These add only more Imperial options which I can image will see play in the fields of 40k. 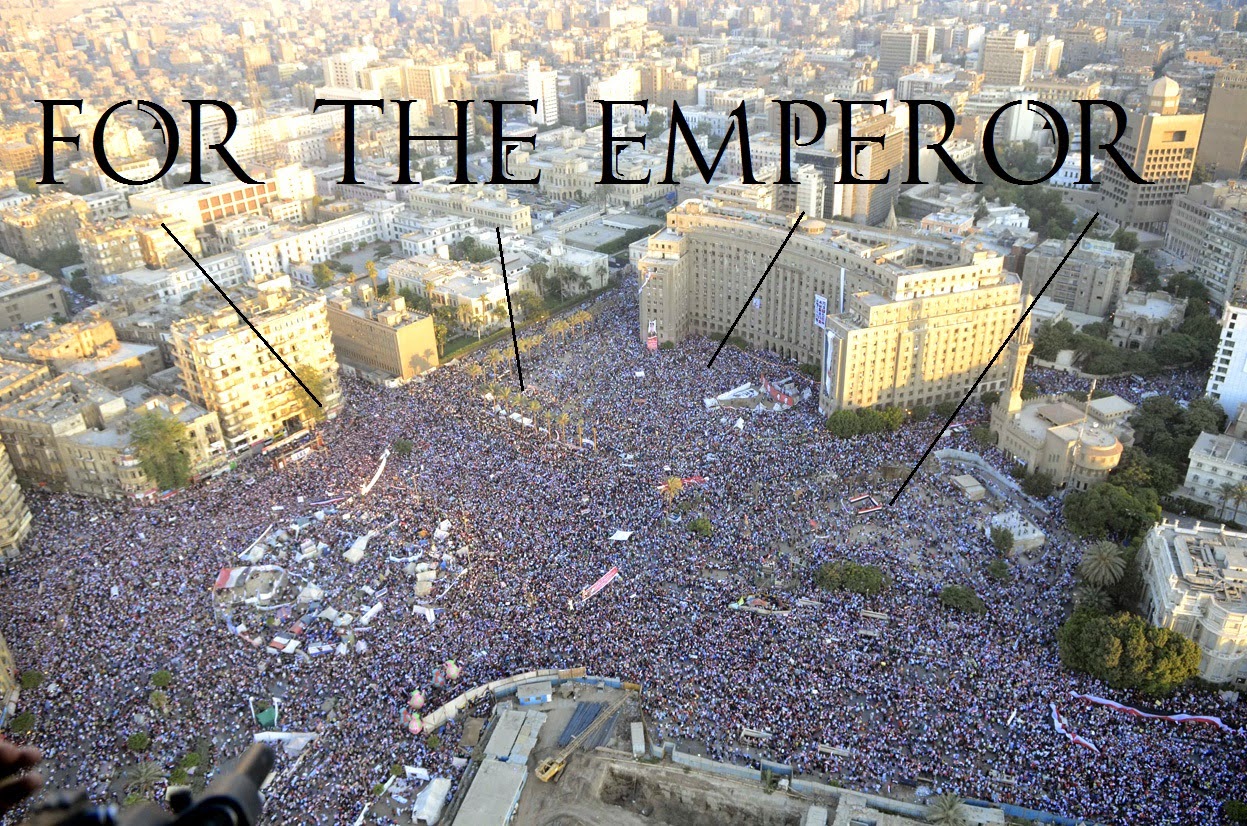 Good Lord it's getting crowded, and we haven't even made it to the boarder of the Imperium yet! Honestly it's kinda hilarious that it makes me feel like one of the many untold trillions of human beings in the grim dark.  The real issue is that while I do own Imperial forces... I also own Orks.  Apart from a relatively lackluster re-release, it has been a long... long time since we've seen anything new show up for the Greenskins.  But even so... I can't complain given their mass of Forgeworld options... and of course their ability to loot anything.  But some races just aren't so lucky. Think about the Dark Eldar... It's a shame that they just don't get much.  Even with the Harlequins helping out... it's a far cry from the piles and piles of over 20 Imperial publications to chose from.  And this is not even counting the vast level of Imperial terrain vs any non-imperial tech.  A clever person can build faction-themed versions... kits and general design of these terrain features still center heavily on Imperial flavor.

While the game isn't made terrible by these things, but it sure does make those armies left without options feel a little hamstrung.  It makes me feel like things like the Wave Serpent are a necessity to keep up with sheer Imperial options.  Honestly a great way to make the dying Eldar feel more powerful, or at least advanced than the mass produced Imperial stockpiles.  But from a game play standpoint... it's annoying.  Brand new units in the Imperium, released not even a year ago, become instantly worse and less versatile than new units.  The Hunters and Stalkers have a hard time keeping up with the awesome might of things like the Deredeo Dreadnought, and I can only imagine these instances will happen more and more.

So what course do we players have?  Not much.  The Heresy is not even half over, and now we have rumors that the Heresy model line may be coming out in plastic from GW itself.  With all of this Imperial propaganda and model productions bursting through the walls, non-Imperial model and unit releases are becoming a rarity.  From my point of view... I long for something different.  Does anyone besides me find this overload frustrating?