Heresy in the Library - Deathfire 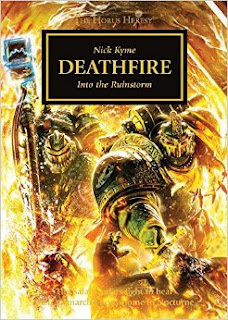 Greetings good people and welcome back! Trooper here with another installment of "Heresy in the Library", where I review Black Library publications and let you, the reader at the other end of the data-slate, know how it is! Up for review is the new Horus Heresy novel, Deathfire, by Nick Kyme. The Salamanders get another novel and we get to see more doom and gloom from the paltry few dudes in Green. Were you hoping for some major plot advancement in the series? Perhaps some cool military action and bolter porn? What about...aw hell, you're not going to find anything like that here. Vulkan lives, but he doesn't do it well.


First and foremost, I'm going to state something that should be obvious, but probably deserves some attention.

I really should preface each new Horus Heresy novel this way, given how far we are into the series. Book 32 really is an impressive accomplishment for a series that, for the most part, has remained a fairly solid story. But, there are some definite...pains as the series has expanded. Consider, there are eighteen legions with eighteen gene forged generals of legends, plus a few different factions (Cabal, Perpetuals, Knights Errant). The universe, as they say, is a small place for being so big. At book 32 in a series that is arguably only half to three-fourths of the way through to it's completion there appears to be too much to cover. Too much is going on and, it seems, the universe is suffering for this.

But what about Deathfire? How does it suffer from this over influx of information? Simply put, various authors appear to be conflicting each other and are trying too hard to assert their own version of the universe. For example, some of you may remember Vulkan's reveal as a Perpetual in Vulkan Lives. Nick Kyme said, in the afterward, that he hoped this would be the beginning of a new and interesting series for Vulkan in the Salamanders. Then, in An Unremembered Empire (curses be upon that book), Vulkan is killed by the Fulgrite, a McGuffin designed to kill a seemingly immortal being (The Word Bearer's want it to be used to kill the Emperor, believing it to be a sliver of his power and therefore able to kill him). Dan Abnett killed off Vulkan with this piece of power and establishing that it could be used to kill beings like Vulkan and the Emperor, thus ending Nick Kyme's desire for a whole series with Vulkan. It's safe to say Kyme has the market on the Salamander's cornered, but to me it just seems...dishonest to plan that way. Unless, of course, it was JUST AS PLANNED (Fuck you, Tzeentch). 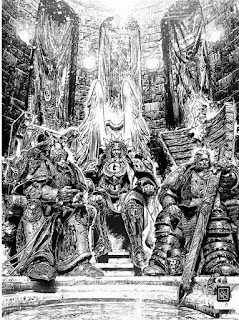 Deathfire begins with Artellus Numeon, equerry to Vulkan and Salamander who puts a little too much faith in Vulkan, being a prisoner on board a Word Bearer's ship. Tortured and a little worse for wear, he is rescued by Aeonid Thiel of Ultramarine stock. Thiel has been busy since returning from Calth, building an elite Ultramarines unit to counter the "Unburdened", or daemons. At this point in time, the war in Ultramar has been won and Thiel is cleaning up the border worlds and tracking down any Word Bearer's ship left in the Segmentum.

Returning to Ultramar, Numeon refuses to believe that Vulkan is dead and sets off to return to Nocturne, believing that Vulkan can be reborn in the fires of Mt. Deathfire (as per their semi-religious belief on Nocturne). En route they are chased by Quor Gallek, "The Preacher", a Word Bearer who tortured Numeon and who is seeking the Fulgrite. Oh and the Death Guard get involved for...reasons?

I won't spoil more of the plot from there, but the novel is suffused with the idea that "Faith" in something is more concrete than the observable world. Numeon, in flagrant disregard to his own allies and brothers telling him that Vulkan is dead, has faith enough in Vulkan to keep going. He keeps Vulkan's smithing hammer with him, a kind of relic that points him in the right direction and leads him on. In more of a deus ex than the Fulgrite, the hammer becomes the means in which Numeon can survive terrifying blasts, be guided past the ruinstorm, and be tracked in the dead of space by Thiel despite not having any other means to do so. This idea of faith against reason is radically familiar to readers of 40k literature, but unfamiliar to 30k. In this regard. Numeon goes on and on about the idea of faith. Even within sight of Terra itself, even with prophecy from Magnus (who shows up, for reasons, although Magnus showing up probably isn't Magnus, but a fragment of Magnus. Because psychic fuckery) Numeon keeps himself going on the idea of faith. In the end, faith is what sees him undone (in a more...interesting fashion, atleast. Maybe undone isn't the right word). 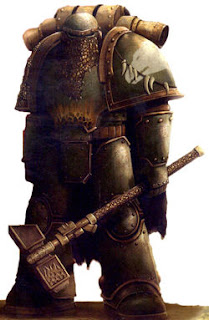 So what do I think of Deathfire? It's a repetitive piece of work, with Numeon spouting "Vulkan lives!"every few pages and having to tell his brothers that his faith will be enough to see them through the worst warp storm since the Dark Age of Technology. In a way, his faith is rewarded. But it's an annoying repetition that screams of earlier Black Library productions where the marines couldn't go a few sentences without screaming "FOR THE EMPEROR", "THE PRIMARCH IS WATCHING!", "BATTLE BROTHERS, TODAY WE ARE IN SPACE". The last was taken as a joke, but you get the point I'm making.

I read 30k novels. I live and breath 'em because I enjoy the "Humanity, fuck yeah" atmosphere of having transhuman dudes in power armor making a galactic empire. Of overblown humanity in the Primarchs and a galactic struggle against the forces of Chaos and the Emperor for the literal struggle of humanity's collective soul. It's a cool concept and the story, so far, has given enough love to all the legions that most fans would be pretty happy with it. It's different enough from the 40k universe that it really is it's own realm by itself. I'm not saying that the Salamander's don't need love, but I feel like a better story could be told by not giving them multiple books in a row and focusing everything else on anthology pieces. It's forcing lesser known artists into the sidelines instead of giving them bigger pieces. It's promoting works that, quite honestly, aren't living up to the potential.

And Deathfire feels like a step backwards. Like we are slipping more into the idea of a 40k novel rather than a 30k one. And I suppose it is to be expected given the radically changing nature of the universe. But I find it unnerving, to say the least. More and more regular humans are showing faith in the Emperor. It's to the point now that there are more Lectito Devinitas followers than normal named human characters.

Of further note is Barthusa Narek, a former Word Bearer. Against all odds he still keeps his faith in the Emperor from the original legion makeup. There is a rather...interesting sideplot with him and the Knights Errant that I actually enjoyed and hope to enjoy further later. This is his second major Horus Heresy book, so I hope the trend continues.

With that this is Trooper, signing off.