Trooper's GenCon 2015 Write Up and Thoughts

Hey all, and welcome back to the Rites of Battle. This is Trooper and I'm writing something out of the norm in relation to what I usually put out. Just somethin
g quick and fun to wrap up the 2015 GenCon experience. I am going to break down things by day. While not as swanky of a video as Godfrey posted, or as cool as the podcast we all did... I do better with the written word anyway. I would also like to use this as a prelude to something else I would like to starting writing for on the Rites of Battle. I really would like to delve more into the roleplaying aspect of games. In a way it was my big break into gaming in general (my room mate Collin got me into dice rolling and a break up got me into 40k)So, without further ceremony....

I should start by saying my GenCon experience was already off to a great start. Thanks to the fine folks at the City of Glass gaming company my badge was paid for several months in advance and I was given the neat "Gamemaster" title below my name, which is pretty wicked sweet when you think about it. This is the second time I've run games for them and the second time they have graciously paid my way in exchange for running eight hours worth of games for them. Last year I ran a Changeling the Lost and a regular New World of Darkness game...which met pretty rave reviews. I got to come into this GenCon after selling off my sharks so I had money to play with..which is something I haven't ever had much of for GenCon. Very exciting, right? 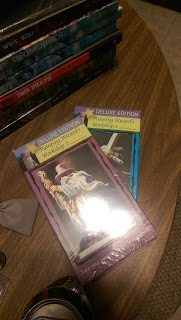 The first day of GenCon started bright an early at 9am with a regular World of Darkness game. Players were set up against a vampiric parasite that, as I hoped, scared the living shit out of them and revolted them. Especially describing an orgy of infected people...reproducing with the parasite. I'm fairly positive the gentleman playing the veteran cop was actually a veteran player himself and he has some choice facial expressions. Imagine the Las Plagas on steroids. There is something very rewarding having players react appropriately to what you give them. I'm all about giving player's ultimate choice...it's their game and I only put the plot down for them to build. They did very well, all things considering. Even the plot twist at the end was appropriate and fitting for a town gone to hell. Even when you think you've gotten out and the hole...something else rears up to grab you.

I got little time in the exhibit hall afterward, but I did manage to snag that wonderful Sevatar model from ForgeWorld. This would put me on...dark paths.

Darker paths, however, would be the City of Broken Glass LARP I did that night. Having done it the previous year, the system is the Classic World of Darkness and is set in the city of Vancouver. To those of you familiar with the system...I'm playing Sydney, a Technocrat and a member of the Syndicate. Imagine the most ruthless yet surprisingly human Wall Street businessman who also doubles over as an assassin. His partner is one of my best friends and plays the most douchey hacker imaginable.

Together we've effectively begun wrestling control of the city from the denizens. This year we stepped up our efforts. Hilarity comes on night two...although I did manage to knock off another PC character. That makes two for me, one last year and one this year. Don't mess with reality, kids. Especially if you are being paid to keep it in check.

Oh and don't make deals with demons. Some folks learned that the hard way...

Second day, second game. Mage the Awakening is the successor to Mage the Ascension in the Classic World of Darkness and this game saw five players...get slapped with paradox. Paradox is reality snapping back into place when you use magic to break it and the players for this game really enjoyed breaking it. Not even an hour in one player had landed themselves the major derangement, megalomania and proceeded to use this newfound confidence to loot a hospital pharmacy while invisible. Another player developed a minor derangement and possibly the most frugal user of magic landed himself a looooot of points of it killing the game's BBEG. There was almost a massive summoning of something violent and the players did really enjoy themselves. For a system as hard to run as Mage is...it went over very well and I was pleased with th
e results. Thankfully a lot less complicated than it could have been. 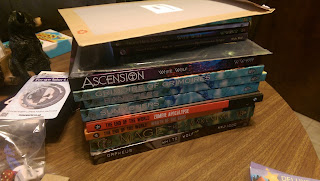 Afterwards I got lunch (forgetting I had already ordered one from Ruth Chris' and missed it) and got to see the hall  for a bit, buying some more models and a few books. I'm a sucker for roleplaying books (especially the World of Darkness) but Fantasy Flight caught my eye with their "End of the World" series of roleplaying books. D6 system in which you, instead of playing a fictional character..play yourself in a world ending scenario. Currently they have two out, God's and Zombies, with a third coming involving an Alien invasion. A friend of mine actually owns the Zombie book and it is a fantastic read with good fluff and even better art and mood. It's something to really sink your teeth into and I really am going to enjoy looking into the God's version. Ragnarok anyone? 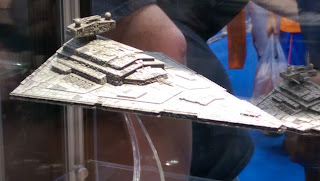 I also would have dropped for Star Wars Armada right then and there if I could have bought the Star Destroyer. Seriously, that thing is a sexy mother right there. Ample, ample narcelles...

Paid a visit to the Games and Gears gents and picked up their bundle for GenCon. Holy hell, I know I ranted about this on the podcast, but I'm going to rant about this here too. Seriously, these brushes are fantastic and if you have the need and the funds...they are well worth the price. 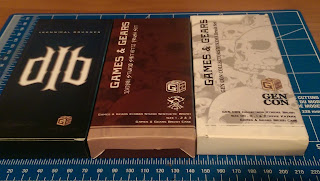 Night two of the LARP consisted of nearly dying twice, some AWESOME roleplaying between myself and several characters, a bank withdrawal that ended up a bank heist after someone forgot their own strength, and Sydney going on the warpath to clean up the city from the dark energies.

Also, drunk Godfrey happened on this night. It's a treat.

First day I don't have to be up early? You all better believe I slept in.

There were nine of us in that hotel room and, thankfully, everyone rolled out at about the same time and we went on our ways. I made a point to wander the hall as much as possible before the LARP concluded that night and snagged some very cool books...as well as picking up the Night Lord's Raptor Squad and the Transfer Sheets from a now very busy and very stocked Forgeworld. Bits were also acquired and I snagged some sweet old metal Night Lord's raptors from GW to kind of kit out the small force of Night Lords I was making for 30k. Ave Dominus Nox, bitches.

After a hearty dinner at the RAM (which should be a destination spot for anyone going to GenCon), night three of the LARP rolled out to Sydney helping to organize the entire city denizens to take down the big evil, threatening every mage in the city with 1984 Style Room 101 and making deals. Power brokering at it's finest. 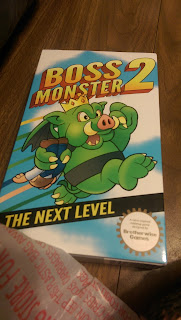 Was a fine way to end the last night of GenCon. Well, that and going to the Claddagh afterward and drinking with what seemed like the whole LARP full of people.

Final Day. Hotel check out. Final wandering of the hall. Picked up Konrad Kurze and one small game, Boss Monsters 2, recommended to me by my friend Fish and Havok. Retro boss monsters trying to kill the hero in a very cool retro looking box that should look familiar to older or retro gamers.

While looking for something for my girlfriend (totally not Jill), I happened to notice a stack of World of Darkness books in a small jewelry booth. Curious, I inquired as to why they were there and was told that they belonged to the person known as Mr. Gone. Not familiar. Go search it. I'll wait.

See all those character sheets? He made all of them and he gets a copy of every book from White Wolf when they come out. Not having the time to play them all, he was selling them to interested parties and his family was running the booth. So, grabbed some books, something from the booth, and met the gent. Super fantastic guy. Like, it was easily the highest point of my GenCon was meeting the person who does all the character sheet designs for the World of Darkness. Just...fantastic.

Shortly before the hall closed up Godfrey, Scoob (the corporate tool you all saw), and myself left the wonderful experience of GenCon behind us...exhausted and fulfilled. 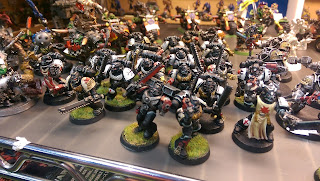 It's been over two weeks since GenCon started and nearly two weeks since the hall closed their doors. During that time there has been a lot of time to reflect and kind of take stock of the loot we all got. I know I've had myself a great time looking through everything, especially building Sevatar, Kurze, and those Terror Squads.

I've got a few models built and I'm super excited to get to use these brushes on em. I've already begun Sevatar and the detail is fantastic and with the brushes complimenting it he is going to come out excellent. Although I did find my old Templar models. Nuts, right? 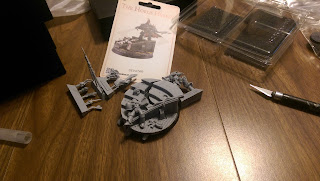 This is my fifth GenCon and possibly the best one yet. I got lots of fun stuff, played some cool demo games, got some cool models and enjoyed the hell of the LARP. Fantastic roleyplaying.

With major roleplaying books coming out from Onyx Path (the successor to White Wolf) and the Fantasy Flight material...I'm hoping to do some book reviews. The big draw is the 20th Anniversary Edition book of Mage the Ascension, a book that I am very excited to get my hands on. I already have the final PDF for being a backer on Kickstarterd and will be coming to you all when I have my greedy mitts on the final product.

This got a big long winded, but I hope you all enjoyed my experiences and my review. Enjoy some pictures that didn't quite make it into the article itself! 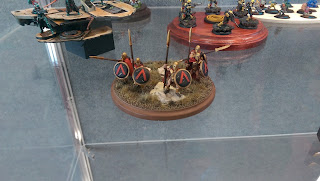 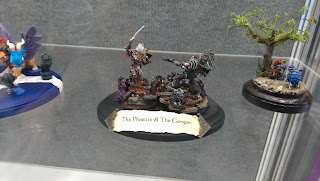 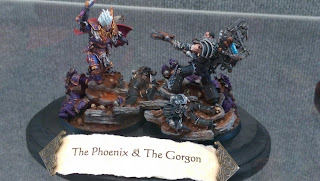 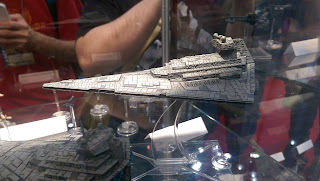 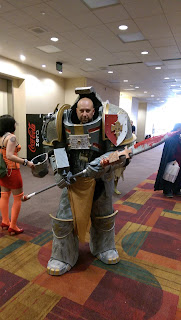 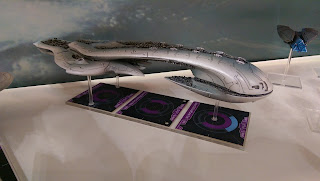 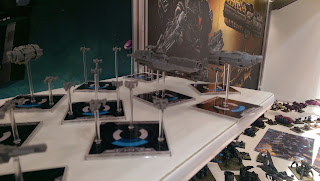 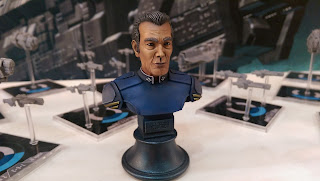 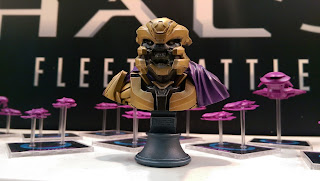 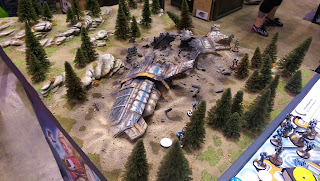 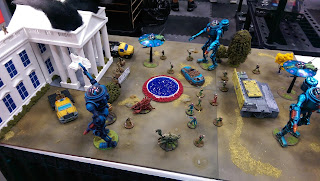 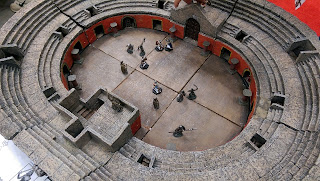 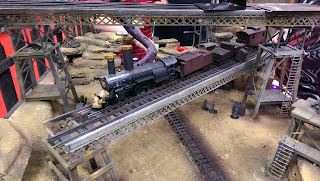 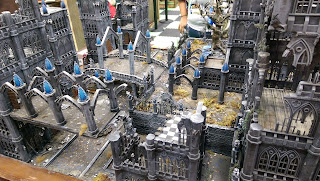 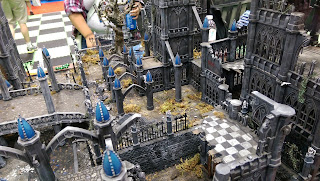 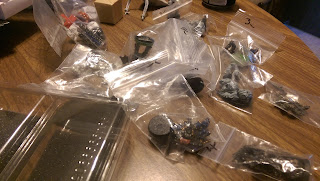 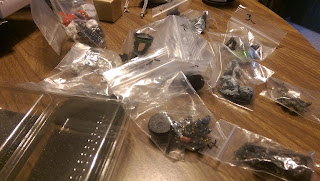 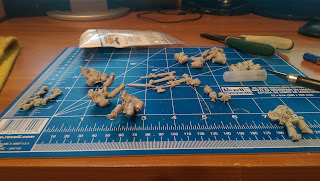 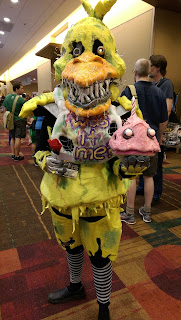 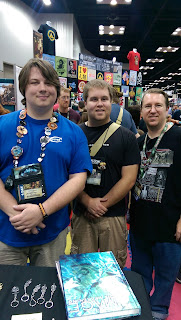 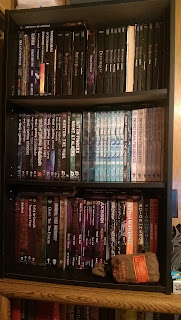 Final two pictures. Right: my roleplaying collection and dice bag. Left: One of my best friend's, Collin (blue shirt), me middle, and the gent known as Mr. Gone on the right.