Good evening ladies and gents. After a long weekend of reading the rumor mill I've got a few nice tidbits for you to consider, not only for themselves, but for how they might change your game. Also, here's some photos in case you haven't had the chance to see them. 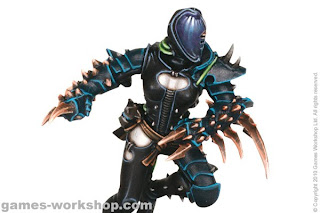 First up, the new wytches. Here you can see one of the new plastic models assembled with what is rumored to be called "hydra gauntlets." These are supposed to give the wytch model d6 attacks for having two close combat weapons instead of the regular one attack. Alternately, the wytches can have their standard weapons that deprive models in base to base of one of their attacks. With their 4++ save in close combat, these guys could be a counter to terminators or most any other close combat unit, especially if they have a few of these gauntlets around. 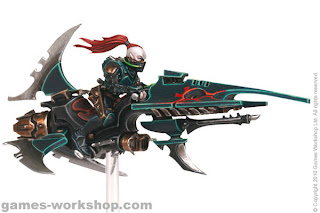 Another unit with an amazing new model, the Reaver, looks to bring a new level of mobility to your games of 40k. Rumored to be able to turboboost a stunning 36", these units can assault most any point on the board in two turns. The Reavers are still toughness four, but rumored to be only strength three and have a 5+ armor save. But I wouldn't expect that to come into play much unless you can deny a cover save, as these bikes don't need to be doing anything but turboboosting because they can still cause damage doing so. The rumor floating around is that when a bike flies over a non-vehicle unit each bike inflicts d3 strength three hits to the unit. 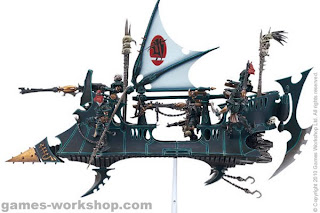 Finally, the old standby vehicle, the Raider has been given an amazing overhaul and has not been left out of the new codex goodness. While getting more expensive (sorry no specifics), they are getting upgrades for five or ten points that make it more mobile and more durable. The first upgrade is supposed to add 2d6" to the raiders movement, meaning it could move between 24" and 36" in a single turn. The other upgrade is supposed to grant the vehicle a 5++ invulnerable save. Not a cover save like the disruption pod, but an invulnerable save which can also be used in close combat.

What do you think, how will the new Dark Eldar change your game? Are you excited or shaking in fear of Commorragh?
Posted by Heretic at 11:28 PM