The Towers of Midnight. 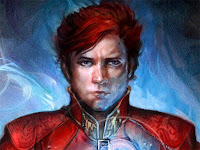 I loves me some Wheel of Time. Robert Jordan is more than likely my favorite author, and I'm eagerly awaiting November 2nd, which is when the second-to-last book is being released, Towers of Midnight. TOR has released a trailer for the release, which I found over at Dragonmount.

I've no clue whether or not any of you have read the series up to this point, so let me state this: Much like the trailer for the new Dawn of War 2 expansion, the trailer is rather underwhelming. YET, it was fan-produced, and any chance to see this stuff in three dimensions is sweet regardless. More exciting than the Starcraft 2 teaser from forever ago.

What do I mean by this?

The monologue is one of the last things the reader goes over in Gathering Storm, and while it's pretty cool to see a beautiful woman play Moiraine, I would have vastly preferred something with Mat, Thom, and Farstrider going to the tower in order to bring her back. OR, since I'm currently reading Shadow Rising, it could have been when she tossed herself and Lanfear into the ter'angreal mirror to an alternate dimension. As a huge fan, I'm already stoked about the buildup that began with Gathering Storm, and I can't say this trailer would appear to kindle much interest in the series.

Much like the horrid covers for the regular books, it doesn't make Randland look intriguing. Mind you, the newer Ebook covers are amazingly well done.

Just some thoughts before the book comes out. And if you haven't read the series yet...start!

Contending with a Cold,
Ishamael
Posted by Ishamael at 6:22 PM

Email ThisBlogThis!Share to TwitterShare to FacebookShare to Pinterest
Labels: Wheel of Time