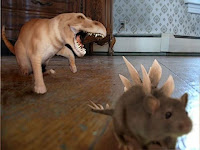 So, we're just passing the second week of classes, and I have taken ill. Were it not so, I'd have been painting a good portion of the day. Yet, because of these circumstances, I have come up with a plan!

You readers have already looked at how our last venture to Bloomington went, and coming home from that I had a fun realization: my rutting army still isn't painted. Now, in no way shape or form do I think that painting should be in any way tied into a player's final score, yet it does remain that to win your army must be painted. My own thoughts are that in order for a player to even compete in a tournament, one's entire army must be painted to a three-color standard. Doubt anywhere is going to do that, yet the situation remains that my army needs to be finished.

So, for the solution:

I cannot attend our painting day on Thursdays, as I have that time slot reserved indefinitely for something else. With my current schedule, only weekends are available for alteration. Yet, Sunday evenings are for making sure I have my materials read and ready for the following day, so something has to give on Saturdays. Also, I need to learn Warmachine, and that's on Sundays. The issue here is that Saturdays are for 40k. I can't give up playing on Saturdays altogether, so I think that I'll play on alternate Saturdays, given that in the previous one I painted sufficiently. So, my tentative plan will be to paint the 1st and 3rd Saturdays of each month, and play 40k on the 2nd and 4th. This is the plan until I finish painting my Tau army, and all my Kroot are painted like the Putties they are.

After the Tau get done, I have to paint my Khador, which I'll apply the same method of schedule to get it painted.

Just as an aside, my notion of what I want to do with Khador has changed. Apparently it's pronounced "KHAY-DOHR" as well. The rulebook told me so. The following is my current idea of what to do in a 35 point game. Next week heralds the last models I need to field a 50 point army, as there are players at the Keep that desire to do so.

So, is this a decent Khador army? No idea! I've tried to cover my bases to counter enemy special rules, use the Rifle Corps' ability that lets me draw LOS through them while they attempt to hold enemy infantry back with their covering fire. The Field Guns are primarily for attacking 'jacks, but if need be they'll be kissing enemies with multiple hit points. The Spriggan is there for two primary reasons, the first being its ability to use its Grenade Launcher to shoot flares to reveal Stealth enemies that I might shoot them, as well as to help Sorscha on her Feat turn. Also, it's still a pretty good 'jack in itself, and it'll do some damage as a counter-attacking unit. As for my plethora of snipers, the Widowmakers, Marksman, and Kell are there so I can do two things primarily, harm basic infantry, and finish off damage boxes on Warjacks when possible. Kell is interesting in that if he does not move, his rifle gets two shots...and it's a magical sniper rifle. I don't know why that's fascinating to me, but it is. Considering what I've seen of Cryx flanking tactics using incorporeal ghosts, he'll hopefully help keep Sorscha safe. With the rest of the army coming in Wednesday, I'll be posting around then what my plans are for 50 points. I think it'll be entertaining for everyone involved.

Also, I'm going to write something on how poorly I'm using my Kroot. Also, I need to write on my thoughts when it comes to events in which full points are given when a player gets "tabled", id est utterly destroyed with no models on the table.

Sick but Alive,
Ishamael
Posted by Ishamael at 6:02 PM