This article is going to be a bit longer than I thought, so I'm breaking it up into a few segments. The first thing we need to understand is the historical and tactical background of the terms I'm using to understand how it can be applied to 40k. I'll be looking at one of the most successful armies of antiquity, the Roman army, and why the formation they created, the maniple, was so devastating.


First we should understand how the armies of antiquity fought before we can understand how the maniple evolved and what made it so effective. In most civilizations, the 'armies' were not armies as we think of them with the discipline and cohesion that marks modern professional armies. Most armies were raised from volunteers who were otherwise farmers or peasants. Even though most of these soldiers could not become rich unless they had a particularly successful campaign and looted wealth, what these men were fighting for besides survival was glory. They wanted to be the greatest warrior of their generation or the hero of a certain battle. Soldiers would charge headlong into battle trying to kill as many enemies as they could on their own. They weren't thinking about the larger battle or their army, but rather about their personal glory and victory would go to whichever army had the better soldiers. 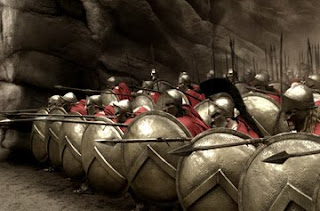 If you've ever watched the movie 300, you've seen one of the military achievements of the Greek city-states, the phalanx. In these armies men would use their shields to protect the man next to them and fight as an army rather than as a group of individuals. In the first row men would overlap their shields and fight withspears under their shields. The row of men behind them would stab with their spears over the first row of men, fighting from relative safety.All the rest of the army, up to 16 more rows, would push the first two rows forward into the enemy. The men in the back were perfectly safe, but most men wanted to be in the front where they could kill the most and gain honor and glory.

In 300 the strengths and weaknesses were shown very well, even if they weren't discussed. Its greatest strength was that the army actually fought in a disciplined, cooperative manner instead of the wild melee of most armies. The phalanx's unity meant that it could lead to systematic slaughters of unorganized armies and because of its success, the phalanx spread around the Mediterranean world. The Romans adopted the phalanx and used it for over 100 years until they expanded into a mountainous part of Italy called Samnium.

The Greeks in 300 chose to fight in the hot gates for two reasons, one specific and one general. In specific they wanted a very narrow area so they would only fight the Persians so many at a time rather than fighting the much larger Persian army all at once. This was because the phalanx was designed to fight head on and spread out as far as was needed to match however wide the enemy army was spread out. With everyone if the back rows pushing the front two rows forward, the phalanx was vulnerable to being flanked. If the back rows of one phalanx ran, their front rows would be pushed back and killed. At the hot gates there was no way the Persians could outflank the Greeks.

The general reason the Greeks wanted to fight at the hot gates was because it was flat. sure there were barriers on either side, but between the water and the cliffs was a flat narrow strip of land. Just like in football, the phalanx required intense coordination between the individuals or the whole effort would collapse. When both armies were using phalanxes both armies wanted to find this flat land to fight and be able to coordinate their armies. In Samnium, the locals preferred to fight in guerrilla raids rather than the big battles in open fields the Romans favored. When the Romans could force a battle, they found their phalanx couldn't work on the hills of Samnium and they lost rather badly. So they figured out a new formation to solve this problem. 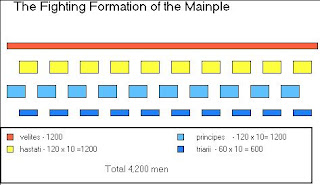 In the clip above you can see the Roman maniple in action against some Gauls. While the force that was fighting would only be part of a single portion of a maniple, the principle of rotation holds. The Romans would fight with a screen of light infantry in front of their first line of maniples, called the hastati. The hastati were the youngest Romans, from late teens to mid twenties, full of vigor but probably on their first campaign. If the enemy broke under the attack of the hastati, the Romans would win easily. If not, they would send in the next line the principes, men who had proven themselves through a few campaigns and knew how to fight, while the hastati regrouped behind a third line of veterans. If the principes broke, they knew it was a battle they might loose, and they would have them fall back behind the hastati, through the third line, the triarii. If the triarii needed to fall back, usually the hastati would have reformed, rested and be ready to come back into the fight.

The maniple overcame the phalanx's weakness to being flanked because the smaller units could be directed to different parts of the battlefield as needed rather than being bunched together to the point of immobility like they had been in the phalanx. Each maniple would fight in essentially the same way tactically, but they could divide and react to the needs of the battle as it progressed. Now this is a simplified version of history, but some of the ideas that the maniple developed can be applied to the tabletop of 40k and I'll go into one way we can do that next time. Till then,