The Wheel of Time RPG 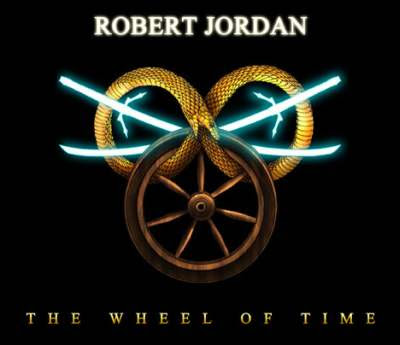 Born at the dawn of the new millennium shortly after the advent of Third Edition, The Wheel of Time RPG was made in 2001 and only consists of a couple books, some old online support, and a couple bits in Dragon Magazine. From what I understand, RJ had to fight with Wizards quite often to keep them from putting the iconic classes from D&D into the WoT world. Which is quite understandable, since ninjas, clerics, and monks simply don't exist in that setting. However, eventually he got fed up and stopped working with them on it. After all, he had books to write!


Over a month ago, I got ahold of the two books printed for the RPG, which can be considered a Player's Handbook which happens to have the bestiary and DM material, and an adventure module called Prophecies of the Dragon. After a lot of schedule balancing and getting people together, I'm currently DM'ing a campaign which just so happens to include Godfrey and Heretic. Before I talk a little about what is happening in the campaign, I want to give my thoughts on the game itself.

Wizards have always bugged me when it comes to D&D. You're weak, easy to hit, and whenever you want to do one of your primary combat actions, you have to give up some kind of precious substance in order to make an effect happen. Contrast this with the Sorcerer or Cleric, both of which do not have to use components, the latter gets plenty of HP and armor, while the former can simply use a spell at will without prepping it ahead of time. That strikes me as class injustice, and it's been bugging me since I began to play D&D. BUT, where this RPG gets it right happens to be in how they handle channeling. No components, and you don't have to prepare spells ahead of time. Furthermore, once a channeler runs out of spells per day, they have the option to attempt overchanneling, which, if successful, lets them use a spell. However, there are dangers with overchanneling, the worst of which happens to be "burning" out one's ability to channel at all.

And the men get to go insane if they overchannel too much! :D

As such, spells per day make more sense to me in the WoT universe than in any other, simply because channeling is much like using muscles, and pushing oneself too far will break something eventually.

Also, another thing I like about this RPG is that each class has a built in "Defensive Bonus," which gives additional AC based on one's class, but it does not stack up with armor. This helps take care of the casters being too damn squishy early in the game, as even an Initiate at level 1 with a dexterity of 14 can actually start play with a 14 AC.

Finally, when it comes to character generation, one must choose a background, which varies from the capitols of the various countries, to simply being a "midlander," which means one's from the Andor region. Included with these backgrounds is a particular skill that person comes with, as well as a feat. There is also a section telling what the people from these various places are like, which is a great helper when it comes to role playing.

I want to emphasize here that this RPG, unlike any other I've played, lends itself most readily to easing into role playing whether or not one has played an RPG, or one is unfamiliar with the setting.

I have five players in my campaign: An Andoran armsman, a Borderland armsman (planning to channel), a Seafolk Wanderer, a Domani Wanderer, and an Accepted from the Tower. Since Initiates are supposed to have a tutor, I've been playing that particular role. The campaign itself began much in accord with the back of the book's little beginner adventure. The party finds itself in Caemlyn with just a couple days remaining until Logain is brought through the streets to show that the White Tower actually does something. As a commotion broke out in the stable yard of an inn called the Golden Stag, a man was thrown at the door of the stable, which revealed three Trollocs. 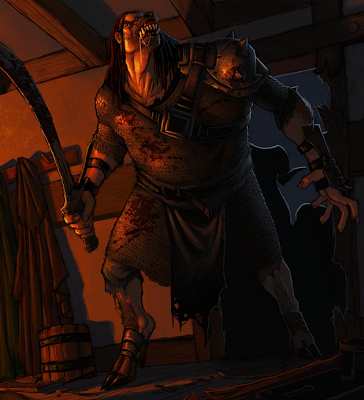 Their features vary, such as having beaks, snouts, horns, and other bestial looks. They were trying to stuff a girl into a sack, but were rudely interrupted. While other people fled, Vincent, the Andoran armsman, Sedig, the Domani Wanderer, and Lana, the Initiate, went to take care of the Trollocs. Unfortunately, Sedig just wanted to know what was happening, and waltzed to the entrance of the shed, which blocked the view of a couple City Guards that were drinking with Vincent. Their names happened to be Kodo and Podo. :P

Vincent charged the Trolloc blocking the doorway, severely harming it with his bastard sword. It was finished off with the Rend weave from Lana. However, the party took too long, and the Trollocs escaped into a back alley. While everyone else ran after the Trollocs in the back alleys of Caemlyn, Vincent quickly mounted his horse, and chased the Trollocs on a parallel street. With the rest of the party close behind, and the Trollocs getting afraid, they came of a dead end. At that point, Vincent turned his horse down the alleyway, and caught a Trolloc by surprise as it looked out of the alleyway for an escape route, taking its throat clean out. The last Trolloc, fearing for its life, dropped the sack and attempted to run, but with cut to shreds by Lana. The girl saved, they rummaged the bodies for some form of identification, and, finding none, returned to the inn to much fanfare.

And so ended their first encounter. I think what I'll do is, over a period of time, regale the stories of the party's exploits and failures, triumphs and woes. Currently they're heading through the ways toward the city of Falme, where some strange men in insectoid armor commanding beasts that look like Shadowspawn have been sighted. Communication with the White Tower from there has stopped, and the heroes are on their way to investigate.

And the Malkieri man just learned that he can channel.

Ishamael
Posted by Ishamael at 11:08 AM