The Size of a Marine 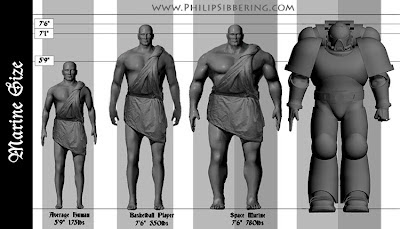 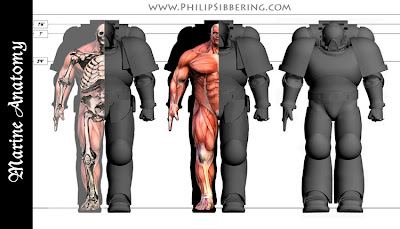 I found these when digging around on the interwebz.  I thought they gave a decent look at the scale of a Space Marine pretty decently.  There is a really interesting thought that popped up in my head though.  We all know the scale of the tabletop miniatures is a little off.  For example, looking at the first picture, we can see that a marine should stand almost 2 feet taller than that of an average human.  So lets take a comparative look at marines and Imperial Guardsmen from the tabletop. 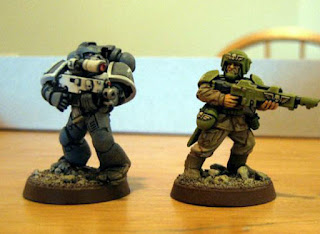 When you put the two models together, you can see a pretty decent lack of size difference.  The average human skull is about 9 inches tall.  So, in theory, a Space Marine should stand just shy of 2 and a half heads over the guardsman.  As they stand now, the marine is barely a half head over.

Well to me, one of he biggest contributors is the age factor.  40k has been around for so long, and the models have just generally gotten bigger over time.  A while back, they finally got Marines to a plastic version, but in order to keep the older models from feeling dwarfed, or perhaps because the fluff didn't say how tall they were, the size didn't change.  Obviously through the decades, they have finally landed on the old marines we've been seeing for a while now.  But as the IG got new models which increased their height, the marines began to feel a little short when comparing to the fluff.

Some people out there have seen this and tried to
rectify it.  Taking a look around, it's not hard to find those who did some creative cutting, green-stuffing, and modifications to make the marines stand at the appropriate height over the average guardsmen.   If you look here, you can see the impressive bulk that the modified Marine has over the guardsman.  After checking it out, the marine is the exact size of a marine according to the fluff.

So with so many of the marine models now floating around, it's be pretty hard to really make the shift over now, and with the recent release of grey Knights, all of whom match up in size with the current size, it's pretty much set in stone that GW won't make that shift any time soon.  I was just interested in the actual difference.

Games Workshop has put out a huge game, and even even bigger amount of fluff, but it just strikes me as interesting that something like this isn't addressed.  What would you think if GW were to put new marine models which are scaled more like the Crimson Templar (Heavy Bolter Marine) above?  Admittedly there would be a lot of short marines running around out there, but does it seem like GW should fix this, or just leave it as is?

Could the difference in size be similar to something like Tyranid Warriors are as compared to the gaunts?  Admittedly the Marines and the Guard are different armies, but I guess the question comes down to "Does Size Matter?"  If you're interested, here's a link to the Crimson Templar "TruScale" Marine project on Daka Daka.