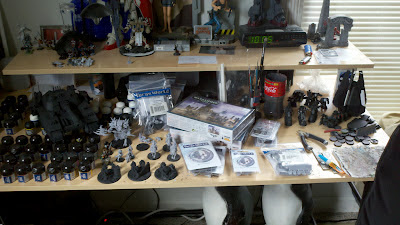 Well as I mentioned before I have quite a bit of modeling and painting ahead of me.  On my trip to Games Day, I managed to snag just about everything I needed to wrap up a good portion of my Imperial Guard Death Korps of Krieg.  On the list of figures that made it into my shopping basket were: 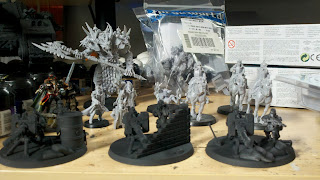 The Commisars and Platoon will be what I need to finish up my plans to convert my army from a vetran spam army to a more conventional platoon-based army.  I have the tank commander painted and atop Iron Duke now.  The others will go into making my infantry platoon soldiers a little more resilient and effective.  The Engineers have been built and are going to be run as a team of veterans with a couple meltaguns.  Hopefully they could show up and work to rid me of some pesky enemy armored targets.  The nice thing is now they have shotguns and so they might all be a little scary since I can actually assault with them now.  Though Guardsmen in CC is a fairly laughable idea. 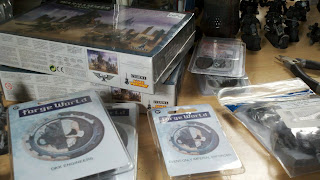 I also have three heavy weapon teams from recent tournament prize support started.  a team of three autocannons is all that is finished, but I do have two more boxes, as well as two actual Death Korps teams still to build.  Along with them are three Death Rider models.  I have seven more to buy fro ma friend who is gracious enough to sell them to me.  Once I get them, I'll have all I need for a full squad!

Also a shipment I've been looking forward too came in recently.  Put it in a long time ago and had actually forgotten about it.

The chaplain is for my Templar, but since I have shelved them for a while to work on my Death Korps, he's a project for another time.  The Inquisitor is actually going to serve as my model for a Pathfinder campaign, but it doesn't hurt to have him around since I do have a few Grey Knight Terminators laying around.  No doubt brooding over my new plans to utilize a few Allied Daemons on the rare occasion.

Sitting off to the left is this bad boy.  A Shadowsword I picked up while I was in London.  I might have to get this guy painted up soon.  I am a huge fan of big artillery pieces, and while not really artillery in the usual sense... there's nothing wrong with bringing a colossal cannon to the battlefield.  Might just be branching into the realm of Apocalypse here pretty soon, especially with a fully based Templar army and a new table top that matches.  Could make for quite a scenic battle! 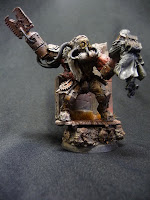 I also just put in an order today for the Limited Edition Renegade Ogryn Games Day model from a year or two back.  I think he'll make an excellent model for my units Bone 'Ead... or maybe even Nork De'Dog if I'm feelin' frisky :D  I did kinda chuckle when I realized I'd be running 3 of the Games Day limited edition models.  The Krieg Commisar on Death Mount, the Imperial Enforcer, and now the Renegade Ogryn.  I do like these Ogryn models, as I feel the gas masks make them fit the esthetic of the Krieg army, and with the liquid green stuff application to hide the chaos marks, they look like crazed Ogryns.  I also plan to run some of the renegade guardsmen as a unit of penal legion.  Yeah, the unit itself is pretty meh, but I love the idea of running a squad of crazy murderers with crappy old gas masks in the army.  I think they'll look fantastic.  Though I didn't get the bitz from Gamesday, I'll have another chance at GenCon.

The last big addition to my 40k Collection for the foreseeable future is not a 40k model at all... but will make for an excellent stand in Titan.  I'll post up pictures, and maybe even a video to introduce him when he arrives.  But it will certainly be a new weapon that the Imperial Government will want to keep hidden well... Wouldn't want any of the Les Enfants Terribles guardsmen from the Fox Hound army to find it and hold a certain weapons storehouse ransom.  :D

All of these models have given me some fun new units to try out.  I made a decision that I wanted to try every unit that this codex has to offer, and make them fit into the Death Korps aesthetic to boot.  It hasn't been easy, but it is certainly worth the extra effort.  Gorgeous models all!  Not only has it given me so much entertainment and opportunities, but I have even found a few unique power plays that came about with 6th!  While I'm not sure that they'd be uber-competitive tricks... I think they are pretty darn cool and maybe worth considering these days.  I'll write an article here in a while covering some of what I've found.  Be prepared for some laughs when that one comes out!  Otherwise that's all for me.  If you'll excuse me, I'll be hitting the old hobby table for the next few decades :D