Coming Back From the Brink, pt. 5: OP Gundam Style! 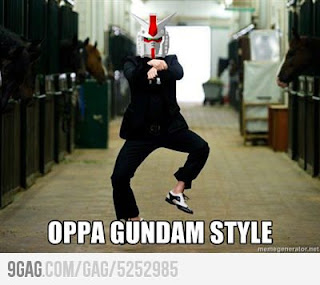 We've finally arrived at my favorite part of the Tau codex and arguably the units that make the Tau unique within the universe of 40k: the battlesuits.  Admittedly there are parallels in the dreadnought and dreadknight, but I accept no substitutes.  The crisis suits are the swiss army knives of an army of specialists while the broadsides and stealth suits excel in what they do. I'll be looking into the different weapons available to each unit and how each unit can be used in synergy with the rest of the Greater Good.  Because of the breadth of options available this article will be its own three part mini-series.  The first article will discuss what weapons are available to the suits, the second discusses the archetypes of crisis suits, and the third discusses what place crisis suits have in the current metagame.  I hope you will enjoy and we both will learn.

Burst Cannon - CS - This is a standard Tau strength and armor penetration eighteen inch three shot weapon.  It's standard issue on stealth suits and provides a good amount of anti-infantry fire with the possibility of stripping hull points off light vehicles.


Flamer - C - It's an imperial flamer.  The ability for any crisis suit to take it is a perk in sixth that was a cost cutting method in fifth.  To save lots of points, twin-linking a weapon is always an increase of 0.5w where w=the weapon's cost.  Twin linked weapons always take two crisis suit hardpoints. 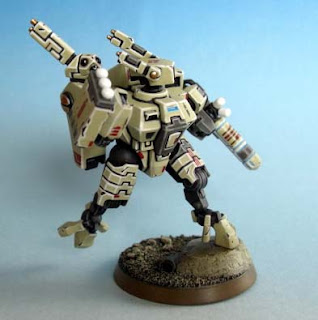 Missile Pod - C - This is a thirty-six inch autocannon.  During fifth edition and the heyday of MSU armies (e.g. mech guard, razorwolves) most every suit that I took had at least one of thesetweapons if not a twin linked pair because of the ability of high-volume strength seven shots to kill these light vehicles.  I'm expecting these to fall out of favor with the increase of foot lists and the ability to take allies like guard to bring that firepower for cheaper, but I'm still bringing them in my pure Tau army.

Plasma Rifle - CB - This was the best friend of the missile pod and part of the iconic Tau suit, the Fireknife (right).  The rifle brings plasma fire in xenos style (S-1, does not get hot) on a rapid fire platform at twenty-four inches.  This is the best way Tau have to negate a marine's armor save and now has some bonus to destroying vehicles if it can get a penetrating hit.  With the increase I expect to see in infantry centered armies, I would expect to see this weapons becoming more popular.  I myself will be running a team with twin-plasma for reasons I'll get into at the end.

Fusion Blaster - CS - See meltagun.  The ability for crisis suits to take this means Tau have deep striking twin-linked melta threats, though being Tau these are suicide melta squads that eat an elites slot.  The stealth teams have access to one blaster per three suits and are more defensible against high strength shooting then the crisis suits because of their stealthed and shrouded rules.

Smart Missile System (SMS) - B - One of the cheaty-est weapons Tau have.  Standard strength and armor penetration, bolter range, ignores line of sight and any cover granted by terrain that the target is not touching, four shots.  The default secondary weapon for broadsides that doesn't get fired often.  It allows one of the best anti-tank units to deal with light infantry decently.

Twin-linked Railgun - B - Oh boy.  Two yards of range, maximum strength and minimum armor penetration with twin-linking.  These are what make broadsides and allow Tau to eat tanks. 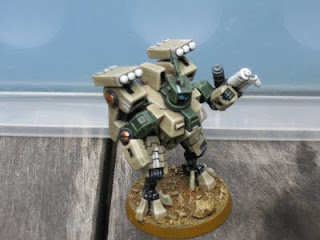 As you can see, broadsides and stealth suits have little choice in their weapons with only the option to change their 5/5 weapons for heavy infantry killing weapons.  When considering taking stealth suits you need to consider whether you need the melta, or even the anti-infantry that cannot score rather than more fire warriors.  When you take broadsides, which you should every game, you need to ask yourself if you need more anti-heavy infantry.  The answer to these comes from your troops and crisis suits.  If you have reasonable anti-heavy armor and a good amount of fire warriors, you don't need stealth suits.  Before you buy the twin-plasma on broadsides consider what you could bring on crisis suits.

I think I'll chop this hydra off here so I can not bore you more with too much information in one post.  Next time I'll be looking at what ways you can combine these weapons and what role crisis suits should fill in your Tau army.  I'm sorry that this series is taking so long, but I'm learning as I write and hopefully I'm entertaining you as you read so we will both win.  Until next time, prosper as T'au shall.

I'm Underground Heretic and I get to live with that every day.
Posted by Heretic at 12:15 PM