AP 2: Where does it belong? 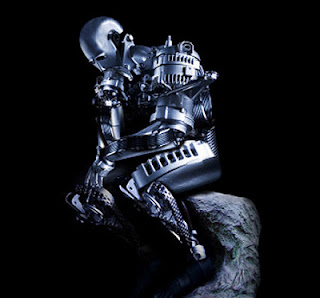 It has been quite some time, and then some since I last had a spare moment in which to add to the collective knowledge of Rites of Battle and the 40k community.  But in that time away, I have had a relatively new way to experience the game.  As I said before I haven't had much spare time recently, and so not only have I not been able to write about 40k, but I also haven't had much time to spend playing the game either.

Now while this might seem like a poor way to consider one as getting to add to the knowledge pool, hear me out.  Usually I am able to spend a much large amount of time within the culture, and so my views tend to follow a certain line of thinking.  Having had a fair amount of time now to think about the game from an "outside-looking in" approach, it's given me a chance to stop and think.  One of the revelations I came to was on AP 2, and just where it belongs.

If we stop and really think about AP 2, and why everyone has made a massive push for it, we might be able to recognize some fallacies, which plague our community since the coming of 6th edition.  Obviously there have been some pretty heavy changes which have come about in terms of just how useful certain wargear items can be.  Power weapons no longer pierce 2+ saves, and generally speaking 2+ just got really good across the board.  Because there is less of an answer to stopping the 2+ armor units once they get to you, it has become common place to see people grasping for a way around that.

One of the first thoughts was to bring power fists.  Sadly as I once (a long time ago) played Crimson Fists, this option is a terrible choice (in my opinion).  The reason I say that is because of the way in which torrent of fire can easily kill off those expensive pieces, and specifically barrage weapon interaction with that rule.  Place the template on the sergeant, and watch them disappear.  Not only that, but a challenger can very easily wipe out that power fist at initiate before hitting I1, making that a massive point sink for a piece of wargear that just can't be kept safe.  Whether it be by shooting, or close combat... you just can't keep them safe enough to merit the price tag.

So without power weapons, or power fists... the logical conclusion is the bring plasma guns, right?  Wrong!  This is where my views have changed a bit after taking (involuntary mind you) step back from the game.  I had thought plasma to be a great way to really get rid of those pesky terminators, but really I stopped and realized something relatively important.  AP 2 weapons like plasma guns still cost an extreme amount of points, generally around the 15 point mark for most codexes.  That's a very salty price tag for a gun that can kill itself.  On top of that, lets remember that while cover saves generally go "worse," ruins still provide a cover save of 4+.  To top that off, there are several types of units that can increase their cover saves, and even basic game rules which grant bonuses to cover such as the new Night Fight rules, as well as the Warlord Trait that gives your army Stealth (Ruins).  Regardless of combination, it would appear that cover can still shut down those really great shots on the grounds of "I have a rock... so screw your plasma!"  On top of that, while again it appears to be worse up front, Feel No Pain is not longer shut down by the virtue of AP 2 alone.  Something to consider when you start paying 15 points a pop.

So what is my answer?  Where does AP 2 belong.  Well, to put it bluntly it's not meant for anti-infantry.  I am not really sure that a 2+ save will every do that well against a massive hail of fire.  Small arms fire en mass will bring down just about anything.  While yes it relies on the enemy to roll poorly, you increase those odds by increasing the number of dice you, and therefore they roll.  If you really want to stop 2+ armored units, bring more troops.  Not only will it net you more shots, but also more scoring units.  6th edition no matter how you slice it is about controlling the majority of the board.  Objectives play a huge role in this edition, and makes holding the point during the game invaluable.  The bonuses you can get by holding the Mysterious Objectives can sometimes net you a win alone.  So the game has made a marvelous fix to get people to grab points and hold them sooner, rather than the 5th edition mindset of late-game grabs.  But that is a whole different topic.  The point is, bringing more small arms is the way I feel that a well-balanced force answer any infantry.

To me, this leaves a great position for AP 2 shots.  It's called Anti-Mech.  No doubt people have realized that these shots get the advantage of using a chart much more similar to that of 5th edition's damage table.  This increases the likelihood that a single shot can do much more to a mechanized target tan those of AP 3 or higher.  Now, while plasma can still be used for getting rid of light vehicles with... some decent hope of damage, it still comes at the risk of losing your own units.  I recommend bring lascannons.  These beasts can reach out and touch a target, and even the mighty Land Raider or Monolith can be felled by a single shot from this weapon.  And Monstrous Creature have very little in terms of protection from these shots.  While yes, the missile launcher can indeed answer many MC's as well, there are some 2+ baddies out there (Armoered Tyrant, Tyranifex, etc.) where having the lascannon is a vast improvement.

After 6th hit, I turned to my Krieg army as my primary army.  I can say that I bring a demolisher in every list.  The new rules for blast weapons no longer needing to lad a center of blast makes that 10/2 pie plate vicious as hell.  Generally I'll save those shots for later in the phase, hoping that I can utilize lascannons to breach the hulls, and then use the superior element of the blast template against infantry.  This is a good example of when I use AP 2 against infantry, but it's more or less out of the fact that blasts are more efficient at anti-infantry, rather than the element of using AP2... it's just a perk.  The Demolisher shells give me access to the ordnance rule, so against heavy hulls like enemy Russes or Land Raiders, I'll drop the Demolisher on those first, and use the lascannons for light or medium tanks.

So in conclusion, it is not a black and white answer.  A good general will know when and where to use their shots in the most efficient manner.  Battles will present unique moments where you have to do things differently than you otherwise might.   But as a general rule of thumb I feel as though people might be over-reacting to the buff to 2+ armor saves, and rushing for the most obvious answer, when there are very easy ways to get rid of them without paying more for high power shots, which in the end could be cover saved away.  AP 2 in my opinion should be used against tanks, where that difference in AP value can actually make a difference on the damage table.  Food for though, while yes the 2+ save is good... how often do you see armies with it in bulk?  If you see terminator armies frequently in your play group, then by all means the AP 2 is great to stopping them.  But consider armies that have a single or only a handful of 2+ models on the field.