Thanks to Faeit 212 for this information, including pics.  I'll have to include most of the goodies after the break to save space, but I'll give you the rundown from what I can see.  The rules descriptions I'll give are speculation, but there is one surety: the Dark Angels codex will release on January 12th, 2013 baring the end of the world.  So I'll have to say there is little word on what Belial here will be able to do, including whether he will be able to swap his Sword of Silence for other cc weapons.  Rumor has it that Drago and Logan will be envious, but thus is power creep.  The price list says we should be looking at $25 for this single model, so it doesn't look like GW is wanting to lighten the load of costs on its customers, which is really, really disappointing.  I would love to see the game get less expensive, but I might be willing to accept the increase if the model quality is this consistently gorgeous.  More after the break... 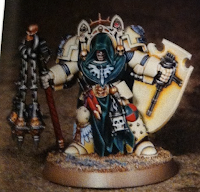 First off we have hints of a change in the chapter's fluff, as we no longer have titles added to traditional units.  We have Deathwing knights, pictured left, that have censer-themed weapons.  While this model has a flail that appears to be made of multiple censers, his comrades wield large censor-maces and storm shields.  I'm not sure what in game effect these weapons will have in game, but they certainly have a theme of purification, as censers are used to burn incense and purify.  Also, these gents aren't fans of helmets and none are pictured with identical hooded heads.


Building out of the same box we have the terminator command squad that presumably includes a banner bearer option (not shown) and an apothecary.  Also pictured are a model with a fantastic cape with power sword and stormbolter, one with lightning claws and this gent.  I'm not sure what his weapon would be called, whether it would be a halberd or an axe, but either way it could be a new weapon as axes and halberds that exist in 40k are one-handed and this appears not to be.  While I love the deathwing, being the only company fully inducted into the inner circle, I would be a cad if I didn't discuss the second wing of the Dark Angels 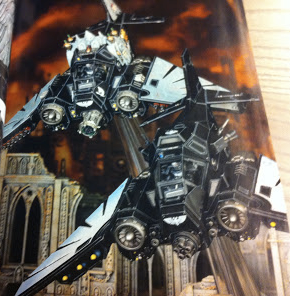 I would also be very much missing out on GW taking a good sculpt and adapting it to new rules and a new purpose.  I give you the Dark Talon, a seeming variant on the storm talon.  Now is where we get into the nit-picking and speculating based on this picture.  Each varient seems to have a different main cannon that is a blast theme with one possibly being a thunderfire cannon with the other speculatively being plasma based.  Each also has a different missile rack, with one possibly being anti-infantry (a la submunitions) and the other being anti-vehicle from sheer girth, possibly skyhammer missiles like the storm talon.  Tucked in the nose of the lead talon is a pair of, or possibly twin-linked, heavy bolters while the trail model has what I can only guess to be a sensor suite.  On top of that, the fuselage of each model has a very different feel.  The leader is similar to the storm talon, though it has two protrusions to the talon's one.  The trail fighter seems to have some reliquary on it's hull.  I've got no idea what the effect will be, but there's another theme here.

More specifically, the there is here on the new Land Speeder Vengence, shown with an assault cannon and a reliquary.  These have been hinted to be the Darkshrouds, essentially vehicles that contain large-scale disruption pods as used in a Tau pathfinder detatchment in Apocalypse,

"The solemn hooded figures glowed with power, coils of cable sending nascent warp energy through arcane generators that threw out an all-concealing blanket of darkness. As they joined the attack, the shadow of the Darkshrouds enveloped the dropsite"

I'm not sure what the rules would be, possibly a large radius version of Shield of Sanguinius or a Stealth Field Generator from Tau.  I'm excited.


I'm more excited about this version of the Darkshroud, as it seems to fulfill the mission of the Dark Angels as Godfrey once told it to me: to bring traitor marines to absolution with the fire of plasma.  Nothing says that quite like a massive, possibly twin-linked plasma cannon on a mobile platform. The themes of re-used sculpts is here again with modifications to storm talon turbines and the land speeder chasis.  I'm really liking this unit even though it is a bit long and slender, though that is more accentuated on the first version of the darkshroud.  So we can see the Ravenwing will have some nice supporting units, but what about them? 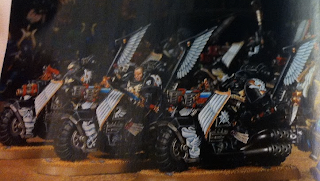 Well, it seems nomenclature matters in the new codex, as we have pictures of the "Black Knights" but not the standard Ravenwing bikers.  I could be wrong, but I think these guys are a more elite version of the bikers.  If I am wrong, there will be very few models in this army, as they come with a "plasma talon" and "corvus hammer" for each model and appear to be able to trade out their talons for some type of grenade launcher.  An army of twin-linked plasma biker troops with what seem to be power weapons would be the new standard of shoebox army.  That is assuming they can be troops, of course, it could be these are the elite or fast slot of an army where Sammael has made Ravenwing troops.  Did I mention that the Ravenwing and Deathwing boxes  can build the standard, knight and command versions of the unit?