Boltguns & Brushstrokes- Ravenwing Bikers
These days, it seems everyone is excited for the imminent release of Codex: Dark Angels. Space Marine releases are always a big deal, and rarely is there a release with so many models that rival the detail and intricacy of Forge World on the first wave schedule.  So, with that in mind, I present the first of a two-part feature on the elite formations of the Dark Angels Chapter—the Ravenwing, and the Deathwing.
The Ravenwing is the Dark Angels’ Second Company, and specialize in assault reconnaissance operations. They provide surgical strikes to quietly eliminate enemy assets before the main Dark Angels strike force arrives. They also hunt “targets of interest” for the Inner Circle—the exact nature of these interests are often unknown to all but the Master of the Ravenwing, but they are second to none in riding down elusive foes and providing a teleport homer for the inevitable Deathwing assault.
Unlike the rest of the Chapter, the Ravenwing wear pitch black armor. Black is a surprisingly difficult color to paint well. Ninety percent of the work is spraying the model black. However, adding realistic depth to the model without turning the model grey is something few painters ever really master. For the purposes of tabletop quality gaming, you can get away with a drybrush of grey around the edges of the model and perhaps washing it black to tone things down.

But who wants to just put something average on the table? The following tutorial works for all black armor, whether you’re painting the Ravenwing, Black Templars, Black Legionnaires, or any other Space Marines wearing black armor. We’ll primarily be using sharp edge highlighting to define the harshest edges, without turning the model grey. 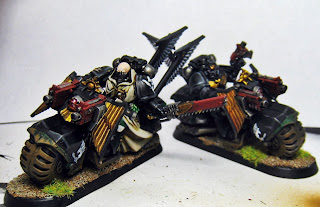 So, we’ll start off by priming our Ravenwing biker black. If there are any areas the primer doesn’t reach, just brush some GW Abaddon Black on by hand on the offending areas. I specifically use Abaddon Black for this because it’s a bit thicker than other black paints, so it works well as a brush-on primer. 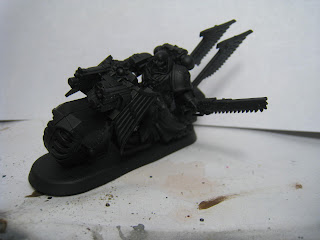 To start, I take some GW Eshin Grey, and basecoat the tires, the iconography, and the feathers. Eshin Grey is very dark—it’s almost black. I also apply relatively thick lines on the sharp edges on the bike. I use similarly thick (about 1mm) lines on the inside of the shoulder pads, avoiding the recesses; the shoulder pad trim, and the sharp edges of the armor itself. This is by far the most time consuming part of painting a black-armored Space Marine. If your lines are not straight, go back and clean them up using black. 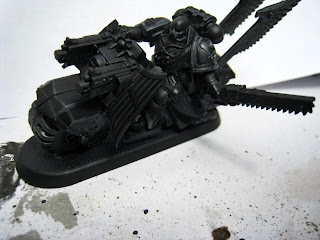 Then, I take some GW Dawnstone, which is a mid-tone grey, and line inside the thicker lines of Eshin Grey. This is essentially basic layering, but rather than placing the light color on the edge, we’re putting it on the center. I then put a layer of GW Ironbreaker on all the metal areas. 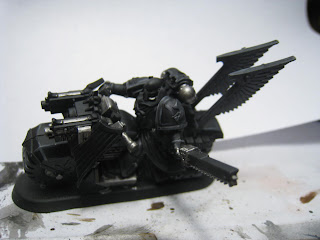 When this is dry, I apply a wash to the entire model with Nuln Oil. This evens out the grey lines, and shades the metal areas. As far as the black armor is concerned, that’s pretty much it—it’s pretty simple, right? 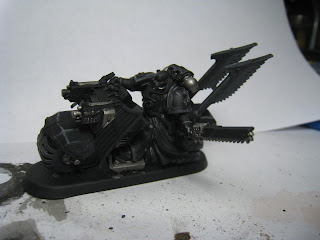 After painting the details, the edges of the black armor pop quite a bit in contrast to the brighter colors used on the cloth, the bolter casings, and the white on the iconography. You can reference previous Boltguns & Brushstrokes articles for how to paint cloth and faces—the techniques in those articles were applied to this model.