Greetings fleshbags! The awakening is all but complete, there are but two chambers yet to arise to glorious command, and today wakes one of those, full of fine specimens indeed, wonders of Necrontyr engineering of the highest form: speed, grace, and ruthless efficiency. The fast attack is ours to command!

If any slot in this codex shines bright as the troops, it is the fast attack slot. Excellent point for point options, as well as truly fulfilling its moniker. These options are all about speed and mobility, all the while maintaining various degrees of that Necron durability. Top it off with the capacity to be scoring, and you've got a lot of big winners here. 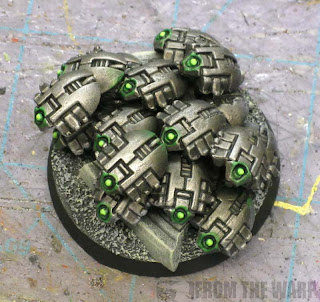 Our first two choices here let you feel a little like Tyranids. Scarabs and wraiths, buggy as can be. Do note that all the Canoptek entries in the codex (scarabs, wraiths, and spiders) do NOT have resurrection protocols. Such is the price of being the mechanical guardians of the tomb worlds. The littlest of the constructs are so small that they're a swarm, but they're no ordinary swarm, they're a swarm of beasts. They ignore terrain at all times, but suffer vulnerability to blasts and templates. They're a tiny T3 and 5+ save, but for a point less than the cost of a tactical marine, who can complain? They have three wounds and 4 attacks with entropic strike, so it's easy to see why the 'net was enamored with using carpets of these little guys in 5th ed, especially considering they're fearless. Now? They're still very good, especially if you take mommy with them (more on her in the next article). If you've got the points, bring lots of them. I prefer a big single unit since it makes working with spiders easier, and keeps your slots open for the other goodies available to you. The reason they're still worth considering is they're a cheap and incredibly flexible unit. You need an intervening unit cover save? Done. You need a cheap hammer to tie down a strong shooting unit? Done. You need to deal with a parking lot? Done. You need to tarpit their hammer unit? Done. Admittedly, they fear any blast above S6 and arguably fear terminators just as much, but hammers will take at least a full game turn to chew through them (likely more than). They're not for everyone, but given that you'll have three bases for every box of warriors you buy, experiment with them. I doubt you'll be disappointed, even if they don't make your final list.

Next come the bigger bugs: Wraiths. They cost less than TH/SS assault terminator, but they're very very much worth that fee. Fearless, jump infantry, storm shield, rending, 3 attacks at S6, fleet, ignores terrain, two wounds per. All of this plus gorgeous (if enormous) models. What's not to like? No. Go ahead. Tell me what's wrong with them? At their absolute worst, they die like 12 power armor dudes vs small arms fire. The boon here though, is that they have to take two wounds before they remove a model, artificially inflating their durability. Oh? They're I2? Fear not. You'll swing first most every time. Whip coils make you cost the same as a BA TH/SS terminator, but you don't care, because now even if you hit something that isn't terminators, it's waiting its turn. Even the coke-d out GKs with halberds, Slaaneshi Daemons, and DE close combat units will have to slow down until you've hit them before they can take a crack at you. Add to this the nigh-certainty that you'll grab the charge (possibly with hammer of wrath involved), and this unit is a winner. Your opponent HAS to answer them, and if they don't, it'll hurt. If your opponent tries to answer them, they're very durable and the rest of your army has bought themselves a turn free of enemy shooting. If you can find the point commitment for these guys, do it. Just please please ignore their awful shooting options. The pistol isn't going to grant you dual armed and the thought of a heavy weapon on an assault unit makes me weep. They aren't the be all end all of the codex, but they're next to the best thing outside of the troops slot. 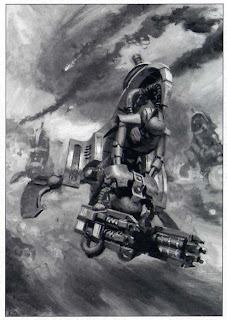 Next come a completely new unit for our metalheads: Tomb Blades. These warriors on jetbikes clock in at half the cost of your average terminator, and can sport either of the immortal's weapons in twin linked form, or the particle blaster. The immortals weapons have been discussed before, and twin-linked only makes them better, but the particle blaster has not. Much like the other two options, it's a 24" weapon. A S6 AP5 small blast. If you want to take these for more ranged crowd control than what a twin linked Tesla carbine grants you, consider these. Especially in an area rife with orks, tyranids, or guard, these could truly shine. Heck, even against marines they can saturate saves awfully quickly. Otherwise, the free weapons are more than adequate for general purpose. As with immortals, I would advocate for the AP 4 of the Gauss option, but there's something to be said for the Tesla as well. Other options for these guys include buying BS 5 (avoid if you're bringing twin linked weaponry), the stealth USR (good if you don't fear terrain), or +1 to your armor save (making them more directly comparable to the immortals of old). With twin linked Gauss and the 3+ armor save, they're just under the cost of two immortals, but they offer twin linked, T5, and built in mobility (and lots of it). I know in writing this, I'll be giving them a second look. They're a good price for what they offer, and put another threat on the table which can scare tank and infantry alike, exactly the generalist the book pushes for. 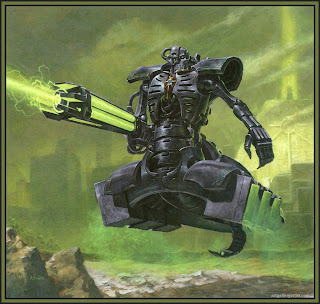 Our final selection comes from the earliest renditions of the Necron codex. Previously jetbikes, they've been adjusted to jump infantry to clear the way for the tomb blades. They've gained and lost some things in transition and the best way to discuss it is to jump right in. A standard destroyer costs the same as your average terminator, and a heavy destroyer time and a half of that. They are T5 and have a 3+ save. Unlike the tomb blades, they lack twin linked on their weapons, in favor of preferred enemy everything. This assists their to-wound rolls, but at the cost of lesser returns on their to-hit rolls. The standard destroyer comes with a S5 AP3 24" 2 shot gun, and the heavy destroyer has a 36" assault lascannon. These guys aren't bad, especially if you have the models already. Otherwise, my trials have found them a bit lacking. They're large enough and low enough AP that most MEQ players will light them up almost instantly. The issue here is what they have traded for their terminator points. They, much like the rest of the codex, lack in anything resembling CC capacity, and they've exchanged a 2+ save for T5 and power armor. Unfortunately, anything that denies their save is likely to wound on 2+ regardless of that toughness boost. Furthermore, a maximum unit size of 5 means they're easy to table, thus denying their resurrection protocols. If you have them already, give them a go. Otherwise, consider saving yourselves their $20 a model price tag and go for some wraiths or tomb blades.

And there we have it. The fast attack section. Join us next time for the heavy support.
Posted by Corvus Sanguine at 12:24 AM