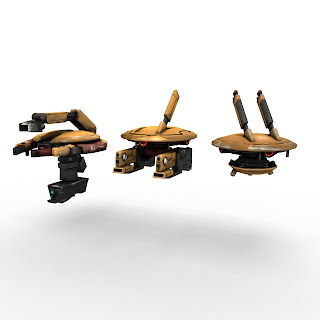 One of the most unique aspects of the Tau codex's portrayal of their way of warfare is their wide implementation of artificial intelligence to assist their forces.  In the early days of the game daemon engines were preceded by chaos androids, but those were essentially robotic vessels for daemons rather than AI.  Similarly, eldar employ wraithbone vessel for their fallen warriors, but the closest equivalent to true AI outside the Tau codex would be the dark eldar's talos and chronos engines.  All of these act as independent units, while only Tau drones are integrated into other units.  Let's look at this unique part of the greater good.


In the previous edition of the codex there were four types drones: gun, shield, marker and sniper.  Any model with access to the armory could purchase up to two drones in any combination of the first three types.    These drones had their own uses and cost ten, fifteen and thirty points per model respectively.  Now they are universally a dozen points and have changed statistics and rules.  I'll leave a discussion of the sniper drones for their unit, because it has changed enough to warrant it's own article.

Gun and marker drones had the same save and toughness as tau infantry, while shield drones assumed those stats of their controller.  They now are all toughness four with 4+ armor.  They gained Supporting Fire and can now survive their controller's death as drone controllers are no longer necessary to take drones.  Drones squadrons can still be purchased independently, but are no longer strictly gun drones.  Any of these types of drone can be part of a drone squadron for an additional two points.  Gun drones have the improved pulse carbine, while marker drones now have standard markerlights.  I won't complain about either the increased price or loss of networking for the doubling of output and over-halving of price respectively.  Their tactical applications have changed much more however.

As I mentioned, drones are most commonly seen as part of another unit.  Whenever a unit with drones buys an upgrade on a "whole unit" basis, drones cannot purchase the upgrade and do not count as models in the unit for the cost of the upgrade.  While marker drones can't be expected to improve their own squad's ballistic skill, but as with the shas'ui's markerlight, it can help your army by benefiting subsequent units.  If there are units in your play area you expect will survive multiple teams' fire consider investing in one per team.  Your teams will cost no more than they did previously.  Additionally, if you don't use devil fish for your fire warriors, I would suggest using drones because of their interaction with the bonding knife ritual.  The ritual normally only has an effect when there are two models remaining in the team, adding a drone to a full team pushes the 25% threshold above three models, allowing an additional model to benefit from the ritual.

Shield drones still benefit from an iron halo, but that is essentially their only purpose.  In most units, these serve only to protect if they are placed on the front line.  In a crisis bodyguard team or a stealth team to which O'Shassera is attached, drones benefit from the effects of the Sworn Protector rule, meaning the independent characters in the squad automatically pass their Look Out, Sir rolls.  This means if the drones and commander are placed at the front, the commander can take those saves he wants and pass of any especially dangerous ones, provided another model is within six inches.

Gun drones provide efficient fire support and excellent mobility on their own.  Gun or marker drones are exceedingly mobile and astonishingly effective if joined by a commander with a drone controller.  Imagine if you will, fourteen markerlights jump-shoot-jumping around the battlefield firing at ballistic skill five or 28 carbine shots at twin-linked ballistics five.  Both of these are possible with drone squads.  Or you could have a warlord floating around with fourteen iron halo wounds, if you just want to never give that point up.

Two new drone variants have been added, the missile and shielded missile drones.  These are exclusive to broadsides and the riptide, respectively and both carry missile pods.  While the missile drones provide extra firepower, I would only use them with HRR broadside teams or in areas where armor thirteen is prevalent.  Otherwise the volume of missiles broadsides can put out is so massive a team can hull point most targets down.  Shielded missile drones on the other hand are toughness six and bring riptides up to seven effective wounds while contributing a four plus invulnerable on two of those wounds and two additional missile pods.  Those come at twenty-five points per model, but are well worth the cost.

There's a rundown of Tau AI, barring the sniper drone unit, but those are quite different and unique.  I look forward to examining them and hearing from you all on these.  Did I miss something, am I incorrect in my assessment?  Till next time folks.
Posted by Heretic at 8:39 PM