The Big Crunch: Fate of the Dark Eldar 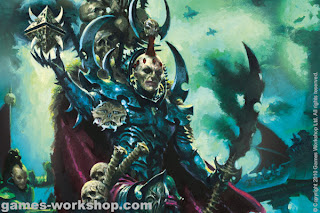 Corvus here, revisiting my big crunch series of articles with a new fresher focus in mind. We've spent enough time bemoaning the state of the marine, but short of Templar, there's a codex out there which has recently felt the crunch of a newer book offering better options per point even more so than the boys in blue. This is Dark Eldar, whom in the wake of the Tau release are looking a bit green around the gills. As ever, with these sorts of articles, I'm not claiming Dark Eldar are incapable of winning games, rather that they're simply feeling outdated and outperformed by similar range codices. 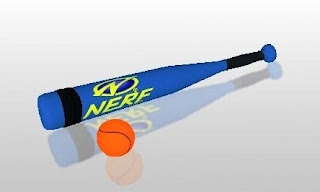 On the whole, the release of 6th edition was something of a sour note for Dark Eldar. They, not unlike Tyranids and Imperial Guard, are still missing a not insignificant volume of their model support. This though was not the worst part of the update for our evil elves. No, they were also hit hard by the nerf to fast vehicles, and the adjustment to S4 hits when their tanks explode. The hull point system didn't take too much from them, given the flimsy nature of their paper planes, and the jink rule for skimmers gives them a little flexibility with regard to if they want to buy flickerfields. Not buying them can be a real deal breaker though, unless you're bringing Vect, since the addition of first blood makes your paper airplane army weep. Furthermore, the changes to FnP, fleet, and night vision were pretty punishing too. The army did reconcile its self with its estranged brother though, finding its sole non-desperate ally in the Eldar. There's some interesting combos there, not the least of which involve the use of Eldrad. Outside of big rulebook adjustments, the disintegrator has gotten a pseudo buff, given the shift to more foot-based armies. But all this considered, 6th has definitely taken more from the codex than it has given. These problems are compounded by the release of newer codices. Dark Eldar, though fairly points efficient upon their 5th edition relaunch, have seen their comparable numbers dwindle in the wake of 6th edition. Where the Dark Eldar warrior once shined, we now see the existence of the fire warrior at the same price point. The gap between the two in terms of capacity is enormous. The fire warrior is drastically more defensible, courtesy of a save he can claim, and the new addition of defensive grenades. Oddly enough, the two have similar fire outputs. They have identical output against T4 targets, and the fire warriors do better against T3, while the warriors will do better against T5 and T6, with the only the Tau able to harm AV 10 and 11. These numbers indicate to me that the Dark eldar are paying a huge premium for their WS, BS, and I values, discounting any value differences in terms of special rules.

Those premiums only become more apparent when we consider the cost of the wych, who is a point MORE than the warrior. She's exchanged her rifle for a CCW, her 5+ for a 6+/4++ CC dodge, and in the points hike, she picks up another point of initiative, and combat drugs. Now admittedly, there are no punishing results on the table, but the chaos-esque effect does have a "bad" result, in that rolling a 1 now no longer synergizes with the Fleet rule. Looking at comparing her to a warrior, she's paying a point for combat drugs, plus or minus the premium of I 6. Considering similar CC oriented units, like hormagaunts and boyz, cost about half as many points per model, and can be brought in numbers twice as dense, it's hard to justify buying scads of inefficient models for the sole purpose of shoveling them off the board.

Next comes the matter of wargear and transport. As much as I loathe the composition of the tactical squad, the Dark Eldar warrior squad has it even worse. Now, up front, there's good news. The squad can bring a special weapon at the minimum 5 members, which is excellent if you'd like to put a blaster in a venom. Beyond that, for every ten members (squad max is 20), you can bring a heavy weapon. However, this option becomes less tantalizing when you consider that, unlike space marines, the warrior does not have combat squads, meaning that unless you've equipped the squad with shredder and splinter cannon and stuffed it in a Raider (which can cost as much as 80 or 90 points to be practical), you're going to waste shooting from 8 models as you try to utilize your special and heavy weapons.

There's something you'll already note which plagues the Dark Eldar, regardless of what units you will take, a necessity for transport. Their transports are (sorta) cheap, and fairly potent, but certainly put down a monetary hurdle to starting the army. The reason though why transports pose such an issue for the army though are due to their interaction with Power from Pain. First and foremost, units do not gain pain tokens from destroying vehicles. Makes sense though, hard for a metal box to feel pain. Next, vehicles do not gain pain tokens, nor do they convey them to their cargo. This isn't necessarily a problem, but after the nerf to fast vehicles and how their cargo can fire, the venom looks even better as an anti-infantry boat, leaving warriors left to toting blasters and knocking open tanks. 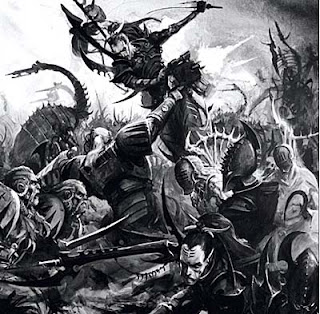 All this goes a long way to say that Dark Eldar seem to have a bad case of "working against ourselves." Their organization makes them feel like they want to play like marines, if more finesse-y and unique. However, the problem with them wanting to play like marines is that they aren't nearly as durable, and have swapped the rules which facilitate the way marines play for Power from Pain, Fleet, and Night Vision, only one of which warriors truly capitalize on. Wyches could be considered an out, if not for the fact that they're even more expensive for a fragile close combat unit in a shooting edition. Again, the codex still works, but there's a lot working against it this time around. That said, GW has shown that they're more than willing to update non-Imperial armies this go around, so there may be hope for our dastartly friends yet.
Posted by Corvus Sanguine at 10:57 AM