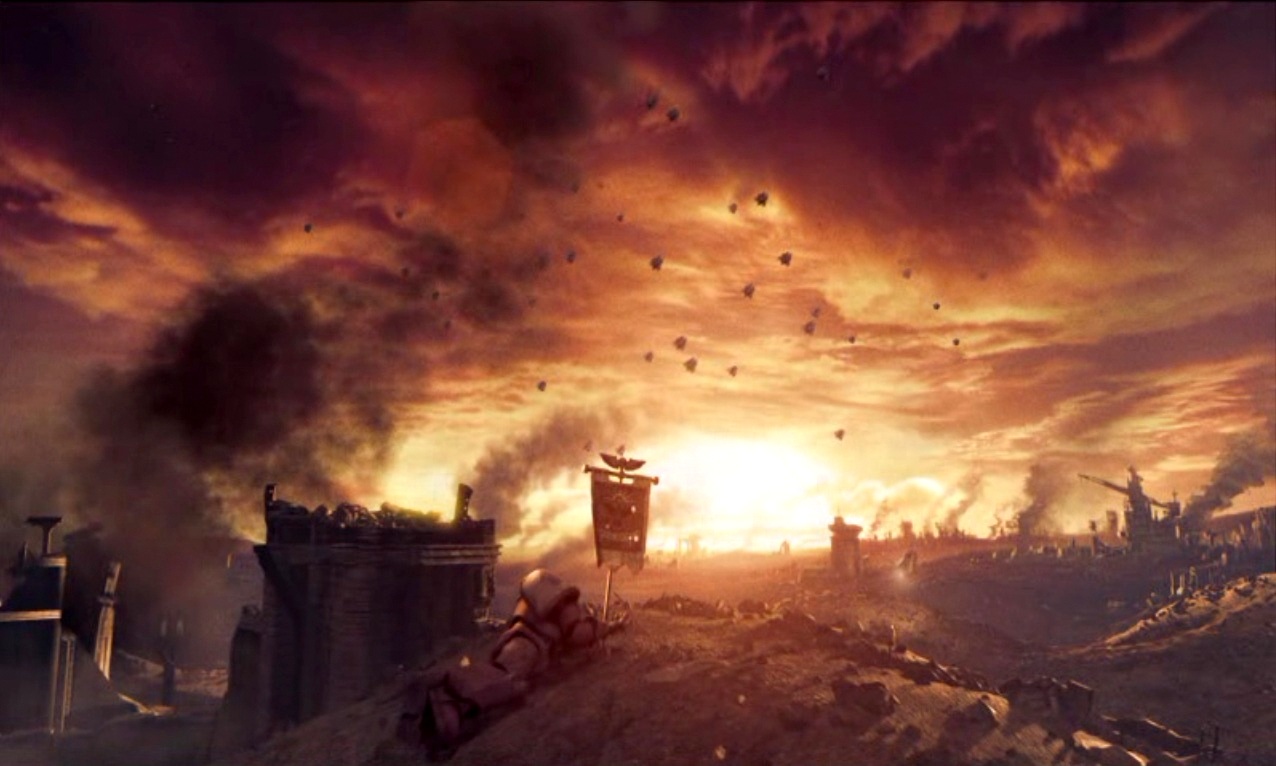 As some readers may remember, a few months ago, I did a two part series about my feelings on the tactical squad, and took some time to reexamine the strengths and weaknesses of that classic space marine mainstay. As a result of that article, and much conversation with Godfrey, I developed a fondness for drop pods, and proceeded to overhaul my first army, giving my Blood Ravens what feels like a new lease on life. In the vein of Son of Horus's recent rhino tactics article, I present to you drop pod tactica. First, let's look at some of the general strengths of the drop pod. The most obvious of which is the fact that it lets you bring in reserves on the first turn. This in and of its self is huge. No other reserve option in the game, short of Deathwing Assault, allows you to enter from reserves on the first turn. This allows you to respond to enemy deployment, even when you go first, and apply strategic assets where they will be most useful. Sure you have to deal with scatter (kind of), but the new disembarkation rules make mitigating what little problems you might have with scatter even easier.

That in mind, drop pods can be used in varying quantity, allowing you to either deploy a few surgical strikes and hammer a flank, or allowing you to shock and awe opponents after a null deployment, quickly closing the gap and bringing half an army's firepower to bear in short measure. In this article, we'll talk about how to best utilize the ability to instantly and with some reliable degree of precision cross the gap in terms of what weapons, units, and codices have to gain from the maneuver the Codex Astartes names Steel Rain.

Our jumping off point is going to focus on what weapons play best with drop pods. As was true in 5th edition, melta and flamer weapons still shine brightest with the aid of drop pods, but they're hardly the end of the story, especially depending on what codex you're dropping out of. Naturally, when considering these types of weapons, our first look will be to consider Vulkan of C:SM. Though his beak was blunted with AP 3, he's still pretty exceptional. He's tough, relatively cheap, and packs good rules for dropping in hot, even if you're unlikely to capitalize on master crafted hammers if you're going full drop pod. He costs you chapter tactics though, which can be a pretty solid rule for drop armies (more on that later). Outside of him though, plasma is certainly worth considering if your play group is heavy on light tanks or terminators, as well as monstrous creatures. In fact, the only weapon class that doesn't much work with drop pods are those of the heavy variety. On your initial turn, you'll be firing a snap shot, and then from there you'll be considering punching to death anything that survives your initial volley of fire, and shuffling about to reach objectives and in these tasks, heavy weapons will not do.

This in mind, our standard C:SM is at a bit of a disadvantage here. Their biggest problem is that you have to bring ten dudes to get your weapons (less of a drawback since you have cap 12 drop pods), and that once you do so, you're "paying" for a "free" heavy weapon. Admittedly, this can be a multi-melta, and you're at a great range to use it, but sometimes this is more hindrance than help, especially when the similar DA tactical squad can simply forgo that weapon option and save 15 points or so. This still pales in comparison to both BA and SW, who can choose to give two special weapons to 10 dual armed guys and throw them down for a very low price.

On the whole, each codex has some manner of special rules or units to offer drop armies. C:SM has combat tactics to help pull you away from charges and retreat your last few guys so that they might hold objectives toward your board effectively, as well as the aforementioned Vulkan, or Pedro (cheap combis and access to heavy flamers), and there's even the ironclad dreadnought in there too. Non-Codex Chapters have access to divination on librarians, which can be a big deal. Blood Angels get assault squads in (free) pods with dual meltaguns, and furioso dreads, as well as access to FnP, red thirst, and they still retain sternguard. Space wolves have dual armed, counter attack, and generally low points costs, though this comes at the huge cost of combat squads (talk about wasting bolter dudes). Dark Angels are a bit of the odd man out here though. Their banner system allows them to fake being Wolves or Blood Angels, but unfortunately it comes mated with grim resolve, which gives you the worst parts of being fearless, without actually being fearless. Which is pretty bad. Some things can balance this out, like a power field or Ezekiel's +1 WS bubble, but obviously, this isn't perfect. If you're playing Dark Angels, though you can use drop pods, you're likely playing the codex for Azriel or either of the other FOC swap characters. The last codex to discuss is Templar. They're in an odd place, but I think they have some of the most to gain from drop pods, given that they are an assault army which needs to cross the gap quickly. They still lose out here due to high points costs though, but drop pods help them do their job faster, which makes it hard to argue with.

In my opinion, red and blue are actually duking it out for the top slot here, with wolves trailing a fairly close second. The best part about this though, is that you can always ally with brother marines to smooth out weakness of either army and come away with the best of both worlds. This works best above 1500 points, due to the need of bringing two HQs, but even at lower points levels, you're hardly in a bad place, in no small part to being able to do things like prescience sternguard, or put a wall of counter attacking guys between your tactical marines and the other guy's army.

On the subject of allies, there are two or three which have been left out. The first, being the more general instance, is imperial guard. As we have often discussed between myself, Godfrey, and Heretic, guard are great at voiding midfield, but have trouble holding it. That's where some help from the heavens can really shake things up. Sending your marines in puts a tough wall of power armor between opposing firepower and your otherwise squishy guardsmen, a threat which largely cannot be ignored, due not only to their firepower, but due to their ability to follow through in the assault phase as well.


The other, slightly less orthodox options are Eldar or Tau. Though only the Tau are brothers in arms with C:SM, both are at least yellow with most marines and have a similar ground presence to guard in that they generally dislike being caught in melee combat, and can benefit from having very close in support. In fact, there's very few rules which could even be shared between the fish and their ally of choice (short of tacking special stuff onto a suit commander), so there's little reason to fuss over being battle brothers with them.

Our final question, beyond how many pods should or can we bring in a list, is whether or not to include a flyer. For armies deploying exclusively via drop pod, my usual advice will be no. Quite frankly, unless you can bring one without cutting into your alpha strike (i.e. you can consider one if it would only cut your list from, say, 8 pods to 7), I feel very strongly that you do not need a flyer. Ideally, your army should have too much control of where and how they are in the enemy's face to be able to be much more than annoyed by a flyer. Yes, even the dreaded fire breathing chicken of chaos shouldn't do much more than grab a few models a turn if you spread yourself well enough, especially considering you can start locking yourself into close combat after the first turn. Otherwise, if you want to include a storm talon or a nephilim, don't be afraid to. Both are good enough utility boats for a pretty cheap cost which allow for you to try to ward yourself against any undue burning sensations. However, avoid large points sinks like a full storm raven. It'll likely cut into your alpha strike too hard to make it worth it. This isn't to say that the big bird doesn't work, but rather that it cramps steel rain's style more than a little.

Last, but certainly never least, is the matter of how much to drop in. Needless to say, you'll maximize your first turn impact by bringing in odd numbers of drop pods, since the amount which comes in first turn is half rounded up. This means that just about any army can get away with 1 or 3 pods pretty easily. 1 pod means your key piece of reserves always comes in, first turn, every game, guaranteed. This can help snag a quick first blood if you shove two meltaguns in an opponents face on first turn and tell them to deal with it when you slag your choice of tank all but instantly. Likewise, putting three things in pods can further assist in securing first blood, while helping to keep a valuable support reserve back, or hold a troop to drop onto an otherwise uncontested point.

Past three pods though, due to current game rules, you're better off trying to cram the whole of your army into reserves. Not only will it give you more impressive alpha strike capabilities, it'll also give you more flexibility and customization to tailor what parts of your army drop on your opponents based on what army you're playing against. Remember: anything put into a drop pod does not count against your reserve totals! Also, since it comes in at some point during first turn, you won't (in theory) lose the game due to lack of board presence at the end of a game turn.

Going all in for pods is a viable option and one I'm currently having a lot of success with, but it's far from the only option, as our own Godfrey has previously used two and three drop pods to great tactical success. Hopefully this article has helped open your eyes to some of the various uses and strategies you can employ with drop pods, as well as a brief glance to what they can help offer in terms of allied detachments.
Posted by Corvus Sanguine at 5:25 PM