Changes in my Eldar Army: The Motorpool 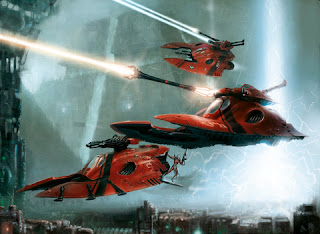 Today, we get to talk about one of the most important parts of knowing how to fight against the Eldar menace.  Today is the motor pool section to wrap up my discussion of how I will be trying to transition my army into a 6th edition codex.  While there were the heretical few who played Eldar on foot last edition I was one of those who played mechanized Eldar because they moved faster than my Tau.  Let's get down to discussing the three vehicles I have experience with .


The first part of the motor pool that needs discussed is the wave serpent because of its ubiquity and its versatility.  In the last codex, the wave serpent competed with the falcon for the title of most durable vehicle, with each bringing its own type of durability to the table.  The serpent reduced any weapon whose was greater than eight or which rolled more than S + 1d6 to strength eight and S + 1d6 respectively through its energy field.  The falcon, with holo-fields, forced you to roll two dice on the damage chart and take the lower of the two.  The durability of eldar vehicles has changed with the edition and definition of these pieces of wargear.  How they have changed has made these durable vehicles even more durable.

The energy field that defined wave serpents is gone, replaced with the serpent shield which can either reduce penetrating hits to glances on a 2+ or forgo that protection in the subsequent turn and fire a long range, high volume weapon.  The holo-field, formerly off limits to wave serpents, has been opened to them and turned into a discount disruption pod that only applies when the vehicle has moved.  These two defensive items combined with the improvement and cost reduction of its weaponry has made the wave serpent a dominant force on the current meta scene in either an alpha or beta strike capacity.

Coming from the perspective of an eldar and tau player, I can say that the serpent shield, defensively has only emphasized rather than changed how to properly kill a wave serpent.  In fifth the weapon they feared most was the missile launcher as it was both relatively plentiful and unaffected by the energy field.  The energy field effected armies that brought low quantities of high strength weapons to kill tanks, but didn't effect armies like the guard who brought lots of mid range anti-tank weapons.  The serpent shield similarly hoses weapons like railguns and meltaguns, but doesn't effect weapons like missile pods and autocannons.  It may be intimidating that you can't blow it up in one shot, but it doesn't actually prevent damage to the serpent so much as it prevents it from being catastrophic. Next up we have the war walker, that gun-toting chicken of a machine.  In my old list they brought dual scatter lasers to the party just to make mincemeat out of enemy infantry.  Their output, even without the buff to BS 4 meant they were essential to make up for the expense of the rest of the army.  Laser lock encourages you to take a scatter and some other weapon, but double scatters is still a very nice option.  If you need highly accurate lances or star cannons you can get one out of the war walker squadron.  For a small increase in the functional points of the unit, war walkers have gained a 5++, battle focus and BS 4.  They're a definite winner in the codex, especially if you want to run without farseers.  Just remember that when you fire a squad of three, you need to work out hits from each scatter laser individually in case one completely misses.

The other vehicle I used frequently was the fire prism and it has certainly changed.  In the old edition its prism cannon was able to forgo its shot to link with another prism, improving the shot and twin linking it.  Now they can't link, but don't really need to.  Its small blast lost two strength, and the option to instant death marines, and thus won't see much play, imo.  The large blast went from a heavy bolter profile to a neutron blaster, which gives a single prism the ability to deny marine saves in a large area that required two prisms last edition.  The nerf to the small blast was more than compensated for through adding a 9/2 lance shot at sixty inches to allow the prism to hunt tanks large and small.  On the whole, it was simplified and can now do its job independently.  Pretty good example of the codex as a whole.
Posted by Heretic at 12:00 PM