The End of the year is Nigh.  The Harbinger of summer's end and the coming of the cold, northern winter winds that year's end brings has come and gone.  Yes, it was a time of celebration for those who dwell in the deep caves of game stores and basements, and gather above ground in the circle of Indianapolis for the annual meeting of GenCon.  Yes, here at the end of 2013, we have taken our yearly pilgrimage to the holy land of gamers in the midwest, and with it several stories and tales of our experiences from within.  So with this, comes the first tale of two bards who have returned from this land...  A Tale of Two Gamers. 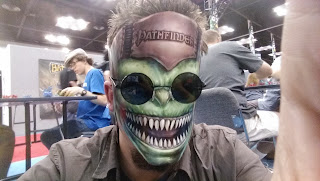 Well this year's GenCon came up on me almost by surprise.  Normally I have had plans leading up to the event proper that I am normally much more prepared.  However, with no job, and no real reliable source of income, I found myself with not much surplus in funds, and no badge to enter the hall.  But, I scrounged up some extra funds, and found enough to purchase a badge to allow myself entrance into the hall.  I spent 3 of the 4 days down there, and there is a plane and simple reason why I didn't make it for the 4th day (Sunday).


Thursday
It was a bit of a blur heading down to the Circle City on Thursday with Corvus.  I had originally not planned to attend, but after a mix up with tickets / badges, I decided to head down and play my first game of Changeling with some friends.  It was an interesting twist on World of Darkness.  Got to play a giant Earth Elemental with two massive shields.  It was quite enjoyable.

After sorting through the badge conundrum, I walked into the exhibit hall with a 4-day pass and headed straight for the Forgeworld booth.  I knew I needed to pick up an Imperial Bombard, and was fortunate enough to snag one.  Having put it together, it's a fantastic kit.  A little warped here and there, but sadly what from forgeworld direct isn't these days.  It's almost frightening to know that the knock-off recast sites do their job cheaper and better.  Makes you wonder... 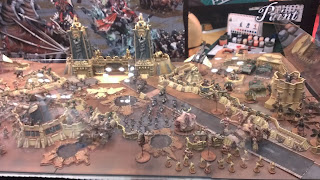 They did have an impressive display at the GW booth.  It depicts the Assault on Lion's gate, which is actually where the cover art for the Big Rule Book originates from.  I even noticed they had a few "Fallen Angels" mixed in with the army.  Not sure if it was just for fluff... or perhaps there may be something more there.  The models weren't unique, but they were, as was most everything, very nicely done.

Either way, I only had about two hours in the hall, but covered ground quite well.  I mostly used it as a day to scope out what all was there, and get a mental map for Friday planned.  I had a few thoughts on some of the booths which I hadn't really seen, but Corvus and I had planned to hit up a lot of the demos when we returned.


Friday
A solo drive down, it was actually a nice ride.  Traffic wasn't terrible and I got to listen to some fantastic music I hadn't heard in some time as I found a CD containing some Great Big Sea I hadn't listened to for some time. 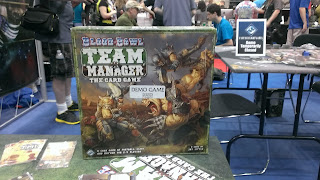 Meandered about for a bit as I awaited Corvus and Havok.  Once in, we hit up several of the demos we were hoping to see.  Fantasy Flight is usually pretty high on our must-check-out list.  They had quite a few games I was more or less indifferent about.  After a bit of waiting and wondering, we finally got a chance to try out Blood Bowl Team Manager.  Overall it wasn't a bad game.  Has a decent amount of content, its simple, and has some pretty decent running room in terms of replay value and expansion possibilities.

Something else I had been more or less interested in trying was getting a taste of the Dust system.  Unfortunately they didn't have a demo of Dust Warfare, but Tactics was there.  They had a decent little set up using Axis powers and the Russians.  Corvus and I got the chance to play try it out, with me getting to run the Axis (I've been pawning over the models for some time) and he leading the old Ruskies into battle.  Sadly dice were almost completely on my side, and from what it seemed the lists were somewhat one-sided in Corvus' eyes.  While I would agree it was one-sided, I felt it came more from dice and tactical decisions than the system.  I still feel that way when I played another round later against a stranger and got Mallywhoped ten ways to Sunday.  It's a good game, and I found myself quite enamored with it.  If I wasn't invested in 40k, it would be a very high contender on my list of what game to get into.  If we went by presentation at the Con alone, It was leaps and bounds above most other booths, including GW.  They did loose points (and impulse sales money) as they didn't have any axis models there save a huge and expensive starter kit... which didn't have ay units I wanted. 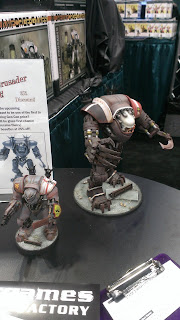 I made it my point to head up and down each isle, and while there were defiantly some of the old mainstay booths... there wasn't really much else there.  I was actually kinda surprised at my lack of options.  It's probably a good thing seeing as how my budget was extremely slim and not having to many impulse purchases looming over my was more or less a blessing in disguise.  But had I a lot more money to spent... there wasn't a whole lot I was interested in.  I did see the new Leviathan model from Dreamforge.  Their model line is fantastic, and could make for some excellent IG or Tau swaps.  Managed to snag a picture of the new Kits coming soon.

I did pick up a cool miniature though.  Found a company that produced a sci-fi version of both Patton and Rommel.  I picked up Rommel to be a neat alternate Company Commander for my Krieg and Ryan picked up Patton for his Elysian army.  He and I got to play a game a little while back using our respective FW codex lists.  We even have a rematch scheduled for this coming weekend.  Might even find ourselves in a three-way slaughterhouse game by throwing our newest member of the 40k Universe into the mix.  Man v Man v Bug.

Also stopped by the art booth belonging to some friends.  It sorta became home base for our group as we almost always met there.  It was a nice little secluded spot out of the way, which made it nice and quiet(ish).  But I wasn't allowed to leave before having my first experience with the Mech Pods.  I wasn't great, but I got to play a Mad Cat MkII both games with the call sign DNTTCHMYKITTY.  Made me quite happy.  I got third once... and flew about using jump jets.  It was pretty enjoyable.


Saturday
Saturday was a bit of the begging of the end for me.  I really didn't do much beyond what I had done on Friday.  I met with Ryan and we scooted about through the Exhibition Hall.  The real notable experience came from lunch.  Sad, but there is almost nothing that beats sitting down to lunch with a bunch of friends in the Circle City Dome listening to a live orchestra play the musical score from the Fellowship of the Ring.  In that brief moment, life was pretty damn perfect. 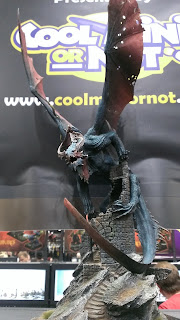 I did see a model I wanted quite badly.  I had told myself I wanted to snag a model for every day I was there.  Sadly, I couldn't afford the $300 price tag for the model I wanted, but I settled for 15 on an old metal Rapier Laser Destroyer Batter I needed for my Death Korps list.  Life is full of small concessions, but if I had the money, and more or less a use for it, I would have been stupid and bought Cang the Implacable!

The only other real notable part of the day came from after the hall closed.  I headed to the art table and met up with some other friends I hadn't seen since I left ball State.  We played a fun game of Betrayal at the House on the Hill.  I played the specific character who was actually named as the traitor, and kicked some serious ass!  Beyond that, we decided it'd be fun to get together at my place and play some Pathfinder.  Before heading out, we did manage to check out Card-Halla.  It was pretty damn incredible to see.

we finished at 6am. Needless to say I woke up at 9am Sunday feeling tired as hell, leading to my next big decision.


Sunday
As the coming Monday was to be my girlfriend's first day of Graduate School, I decided that it might be nice to head north from my home and visit with her and take her out to dinner instead of my normal trip south.  I am glad I did, not only because I was too tired to head to the con, but as I don't get to see her enough these days and I don't believe that's going to change anytime soon.  Alas, I have no real information on the final day, but I can believe it went along swimmingly for those who were in attendance.


In Conclusion
I moved to Noblesville with the notion of looking for work.  It'd taste a lie to say that GenCon being here every year wasn't at least a small factor in my decision.  I love it down here, and the con being in the Indy Convention Center is awesome.  It's a great space, and with any luck next year I'll have a job, money to spend, and maybe even a fun cosplay outfit of a 40k nature.  Time will tell.

That said, the Con was a bit of a let down in some respects.  I felt like I didn't really see a whole lot there.  Maybe it was a slow year for game developers, or maybe just a slow year for gaming in general, but the "wow factor" wasn't really there for me this year.  I didn't have a whole lot of money to spend and the pressing burden of being unemployed may have contributed more that I realize to that sentiment.  Overall it was definatly worth the money, but I'm hoping next year will have some more meat to it.  I'll more than likely be there.  There is even some talk amongst us at Rites who are looking to get a booth down there.  We'll see what we can do, but I am going to try for running an Apocalypse game next year as an event.  Could be a lot of fun.