Let's Be Friends! - Dark Eldar (And Other Thoughts) 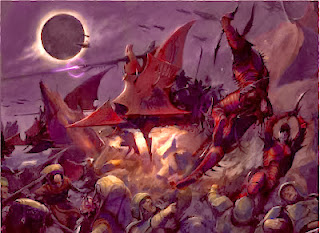 Hey there everyone! I'm back after over a two week long hiatus (courtesy of an anniversary, nerf guns, and zombies), bringing with me our shortest article in the LBF series of articles, an examination of the Dark Eldar and what they can achieve when allied with their less malicious space elf brethren. Also, while I've got the page space, I thought I'd take a moment or two to post some of my musings on the nature of this series, and on Allies in general. That said, let's get down to it.


So, when we look to ally our two pointy eared freaks, the first thing we'll pick up on from a mechanical standpoint is the massive disparity in philosophy, at least so far as transports are concerned. Both codices are renown for the speed and firepower of their transports. However, their durability differs vastly. That's part of what makes utilizing these two armies in tandem so awkward, any Eldar you bring will almost certainly not be fired upon, simply because your primary force, which contains your warlord, is so much less durable. This comes to the front of the problem. Why do you need these two armies to be battle brothers? They're even less cooperative than CSM and Daemons. Marines and Daemons might not be able to join each other's squads, but they can share rules. Which pretty much end at psychic powers. And much like that duo, these two don't really get too much from sharing those psychic powers, only these two have the problem even worse because of their reliance on, or at least strong synergy with, their respective transports. And remember, no matter how much I may love my half brother, my car is for immediate family only. 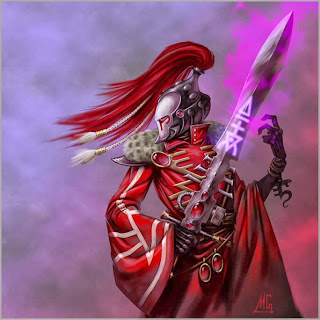 So, what does that leave us with? Nothing that Eldar don't like to do with any other army. Bikes. Yes, I can hear some of you ranting and raving about things like harlistar and other builds, but those haven't been seen in months. They were barely a thing when 6th dropped and they've only dropped off more so since then. So, we're left with concluding that being battle brothers does not make you the best of allies. Dark Eldar's points may be better spent going it alone.

This helps us segue into some of my general thoughts on allies at present. Quite frankly, I'm a fan, at least of the idea. Coming from a background of a multitude of other games, I've seen radically different stances on who your army should be composed of and what rewards you reap for that. Some games, not unlike 5th edition, have demanded that you play a single force. Others have encouraged using a single faction through additional special rules that can be bought. Other still have allowed you to use differing factions and armies under certain circumstances, or by "buying" the right via points costs. And in almost every circumstance, it has been an interesting addition to the gameplay dynamic. Yes, yes, there's the obvious financial motivations for including the option, in that it allows players to buy more product slowly and build into another army incrementally, but most of my experience with allies has been much more positive than the most recent FoB debacle should suggest. While there are some quibbles with the allies matrix, largely revolving around Grey Knights and Tau, most of the time that I've seen allies used, though it presented a very strong list, I didn't necessarily feel that it was anything overpowering or damaging to the game on the whole. With this comes the admission that I haven't played against TauDar, but nevertheless, I don't know that the specific combination offers anything more damaging to the game than 3+ riptides or 6+ wave serpents do on their own. 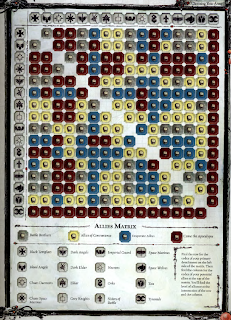 Taking all of that into account, it's still worth examining what allies have given and taken away from codex design. First and foremost, it seems that in some ways, the designers have gotten lazy, or have become more willing to exaggerate the weaknesses of a single codex. For example, Tau don't just suck at assault, they really suck at assault. Their speedbump unit lost a point of strength, and they got defensive grenades forced on their fire warriors, meaning that some careful planning can help you stick into close combat and avoid a round of dreaded Tau shooting. Tau might be a poor example of the exaggeration of weakness, due to how much their shooting improved, but I feel the point still exists. Likewise, the devs have frontloaded certain codices to tell us "This is a primary codex" or "This is an ally codex." The biggest example of this are both of the Chaos books and Dark Angels. Chaos Marines and the Angels only get their FoC play if they're the primary force, and Daemons get their silliness with 4 heralds when you take them as primary.

Past that, we're only left to wonder what they do to keep us from outsourcing our points to the 4 or 5 codices which offer cheap as chips troops, especially those which have extremely forgiving allies matrices. Here unfortunately is where allies seem to fall apart and do more harm than good. For some codices, their internal balance was having cheap toys but expensive troops. The biggest example of all this is Marine armies, forbidding Chaos (they have cultists now). Marines get expensive troops, especially if they're using troop swaps. This usually means they'll either be shorthanded on troops, or miss out on some of their very potent non-troop selections. This really isn't a problem anymore though, given that these sorts of armies can now easily ally with either Coteaz led Grey Knights, Imperial Guard, or Tau, each of which offers various options for troops which are significantly cheaper than tactical marines. There's also the matter of considering allies working the other direction and those books utilizing marine-style non-troops to bulk out their killing potential. 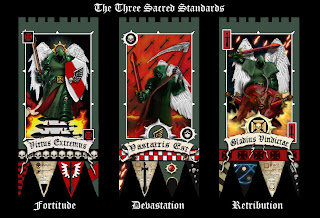 On the whole, the most of the work that has been done to keep people in a single book has been to offer "banner-style" effects which apply only to units selected from the same codex. To me though, this seems to be a poor execution of a reward system for running out of a single codex. These banners are usually limited in the scope of their impact, and are often expensive. Dark Angels feature 5 banners, most of which are situational. This is hardly an enticing offer. Certainly, one of these banners sees play, but unfortunately they leave me with a pretty bad taste in my mouth. My army is elite, and puts few models on the table. When the edition changes to encourage me to field more models, my options are to either sacrifice my lists potency by fielding more troops, or utilize allies. And the best thing you can offer me to recoup the loss of my list's potency is the option to spend even more points on an item which only helps some models before the single model carrying it dies. This is not an acceptable solution.

So, I'll close with a question for us. Without making allies less interesting, how do we make the option to play out of a single codex more relevant or appealing?
Posted by Corvus Sanguine at 10:23 PM