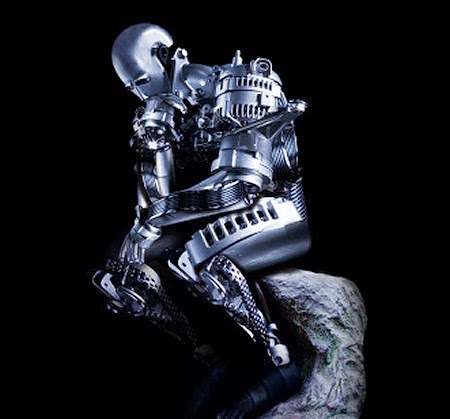 Hey Folks, I thought I'd touch on a topic that has crossed my mind as the 40k universe sits perched on the edge of a new edition, shrouded in possibility.  There is something in the rules which has prompted many players to focus on exploiting one mechanic, and because of this, another part of the game has become extremely powerful.  I'm talking about the Hull Point system, and how players have reacted to this by reducing, or flat out removing heavy hitting firepower for alternatively cheaper, less potent weapons with the express interest of simply drowning their enemy in firepower.  But I feel that the long-lasting and over-arching ramifications of this has lead to much of what people dislike about the meta these days.


Let's put this into perspective.

Ok, so with Hull Points, most anyone can agree that the general rule of thumb when it comes to the mathematics is that drowning targets with a high volume of shots will result in success more often than relying on a single "one and done" gun.  I won't even begin to make an argument there.  However, it does present one issue.

Let's look at some of the top-dog units which are pretty unquestionably dominating the meta these days, and piece together some possible correlatives.

The Wave Serpent
Up front, this tank should really be making you want to take quantity of shots over high powered shots right?  Not exactly.  Think about it.  The problem stems from this thing getting to just blast the bejesus out of people using it's dumb shield gun.  This isn't even a tough choice for them when facing down armies that plan to hull point them out with S6 or S7 weapons, because they're only gonna get glanced anyways.  If staring down a fair mix, or even a heft sum of high powered weapons, it's forcing them to choose the shield or the gun... not just letting them off and telling them to just fire away because you didn't bring anything to stop them from doing so.

The Riptide
Alright, there's no doubt that a 5 wound, T6, highly mobile target, rocking a 2+ armor save... and will more than likely have FnP on top of all that, will be a bear to kill.  If you find yourself running a ton of weapons which float at the mid tier range, you have such a poor chance at actually killing the thing (or things should you be playing "that guy" who brought 2 or 3...), you might as well tank shock it and prey it runs away like the coward it is. While they have a means to get a 3+ invulnerable save, you're not only dropping them from a 2+ to a 3+, but on top of this, you force their hand into it.  If they have to use the Ion doohicky for defense, it means they not only can't use it to supercharge their weapons or movement... but also run the risk of derping and losing a wound.  Maybe less so if it's from the Farsight Enclave, but it's still a chance.  Regardless... forcing them into using their trick at all and risking the wounds, when many players don't even bother using it at all is something that no mid tier weapon can hope to do.

The Helldrake
Alright, this is my proof that not everything is solved by running a Pen to Win list.  I'll actively state that the best way to drop this thing is by sheer weight of volume.  Even when looking at the comparison of both weight of fire vs weight of firepower having an outlet to Skyfire, the sheer volume approach is better served to deal with a target that can not only junk, but has an invulnerable as well.  I still feel forcing them into a tricky situation with heavy hitting weapons is worth a shot, but I'd wager it'll just be better to down him with the volley of fire.

This is where building a little of both into an army can serve nicely.

The Wraithknight
For the most part, this is similar to my initial reasoning mentioned for the Riptide, swapping a high toughness for a little less potent armor.  That said... this thing needs to be dealt with.  While there isn't a trick like the shield that can be forced against them here, weapons like lascannons or sheer S10 can force this bad boy down to being wounded on 3's or even 2's... at that rate, he'll be stuck with a 5++ at best, or sticking to cover like the rest of us.  In either case, he's still being wounded far more frequently than if you just poor a volley of S7 into him, and the wounds will almost always be more meaningful in the saves they allow the Wraithknight to take.


So what does this all mean?  It means that the nature of how people perceive the meta is perpetuating at least some of the issues people perceive with the balance problems of certain units.  Taking quantity over quality has made certain issues like the above all the more potent since they have little in the way of threats.  Now, lets take a look at the opposite side of this particular coin.  After all, the "Pin to Win" mentality may really only apply 100% of the time in wrestling.  One of the other issues we see in the game right now is the sheer bloody power of how throwing ever more numerous mobs of cheap, cannon-fodder infantry units on the table can be so powerful simply because they can't be removed.  Large numbers of units which never see the light of actual battle because their only goal is to join a cheap leadership fix (Cultist + Lord, IG Infantry + Priest, etc.)  are troublesome to armies with high powered shots only... they just can't shew through the bodies.  Heck, Orks in general are based on that principle, they just don't really see play on the scale which people see as an issue.  That and the army suffers from working against itself and many abused mechanics we see (like Allies).

So what's the answer?  Sadly, there just doesn't feel like there is a good one right now.  You could potentially run a little of both, which may be the best bet in many ways, but you'll find yourself running into an issue with how much of each is required, and they both rely on a certain quantity to really be reliable, but in order to reach that level with either... the amount you'll get of the other just won't really be enough to make the difference.  The point of all this is to basically extend the idea that while there are most assuredly massive issues with the core game... some of the issue seems to stem from how people are really playing within that imperfect system.

The time of 6th is drawing near an end, and many of us can really hope that some of these issues may be addressed.  From what little we've seen about the coming edition... there may be entirely new things contributing to the ever growing issues of 40k's BRB.  But, until we see how the balance of all of these new changes play off of each other, we can't really know how it's all going to unfold.  The hope is that as the new edition becomes clearer as the release nears, and eventually is unveiled, the players may look a little harder at the entire scope of choices presented to them.  Hull Points, Flying Monstrous Creatures, Psychic Expansion... these all came about with 6th, and from the looks of it, they aren't going away... so what will the next edition bring?  Who knows... but lets hope that the next edition doesn't discard any more core mechanics, before the game begins to implode upon itself for lack of structure.