Today I get to join in on the fun of list analysis. I'll be starting with an Eldar theme list from our old friend ZerkeX. He's wanting to dive into xenos after being a long time marine player.  He, and Godfrey, love the wraith army concept and want to see it work. I'm a fan of the Saim-Han style of doing a drive-by on my opponents, but this idea intrigued me. That, and it's been way too long since ZerkeX asked me to do this, so I'm going to give this the best shot I can. Preemptive thanks to Corvus for his help with helping me understand the meta and refreshing my fundamentals after a long drought of 40k. Take a look at that picture -> it's going to be important.

Let's start with seeing what's in the concept list:

On a macro level, this army should give its opponents headaches in kill point missions and some trouble in objectives. The troops present a very hard to remove target, with the toughness and save of a carnifex on each trooper, more so if the Spiritseer is in the unit to Conceal them. That's going to make enemy small arms fire less effective at removing models, which can frustrate your opponent and cause them to make mistakes. Playing above the table is going to be important when losing any model is a larger portion of your army dying. 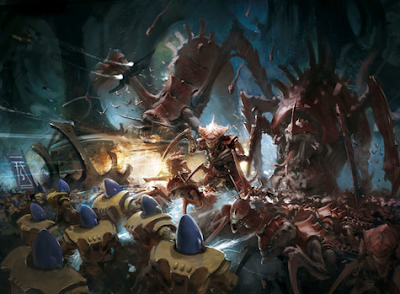 Corvus was kind enough to help me find some of the more obvious aspects of the army that I couldn't see because I was looking for the forest. Upside: by the time the army is finished being painted, it should look really nice, as it will be the second Wraithknight, fourth Wave Serpent and twentieth Wraithguard painted. Downside: if you hate repetition and love variety, this army might need a bit of tweaking. As far as the fluff of the army, this could easily be a counter-attack force during the Battle of Iyanden, as it has minimal presence from living Eldar, homogeneous and powerful weaponry, and extremely high mobility.

Strategically, that story fits the army very well.  Being able to move 12" each turn while firing allows the army to coordinate. A force this elite is amazing at finding a high value threat and eliminating it (Tervigon, Land Raider, etc). However, it will suffer against the hordes of infantry that surround those high value targets (gants, guardsmen, etc) and any aerial targets because of low volume of fire and lack of skyfire. On the macro level this story fits the army very well, but I'd be much more comfortable about this army as part of an apocalypse game where there are more high value targets and this detachment can be complementary to a detachment of anti-infantry firepower.

On the unit by unit level, Corvus is in favor of one of the Wraithknights taking over the warlord role, but I would go far enough the other way to say that we could probably cut one to get a second Spiritseer into the list. Conceal is pretty darn awesome and having more of it is better, at least at this small level. That is, if you want to stay in Codex: Eldar. If you want to go with Codex: Iyanden I'd agree with him that you should really make a Wraithknight the warlord, as losing conceal is a rather large loss. However, the benefits of gaining battle focus are pretty large when you consider it adding d6" to the range of a 12" gun.

When we're looking to stop infantry, we've got two options: Scatter Lasers or D-Scythes. A straight exchange of wave serpent turrets to scatter lasers brings a lot of good anti-infantry firepower with the possibility of damaging tanks. The addition of laser lock means that the serpent shield and shuriken cannons would become twin-linked, adding about 33% efficiency to their shooting. On the flip side, if you're looking to get up close and kill little dudes, do it with fire or in our case warpfire. It's a flamer, it's a wraithcannon, there's a lot of good there.  The only real bad is its range, though it is mitigate by the battle focus if you run Iyanden.  It's an option to consider. I have to concur with Corvus in saying that the wraithknights would probably be better off with the wraithcannons rather than the suncannons. The reduction in durability is a loss, but could actually benefit the army. At a point a unit appears to be so durable that it would be pointless to try to shoot at it. While never unkillable, the wraithknight with shield may appear so and cause the opponent to focus all their firepower on the wave serpents and wraiths. With the cover rules for area terrain such as they are, your knights should be able to get a cover save if they need it. Dropping the shields allows you to buy the shuriken cannons to the wave serpents and make them more powerful at answering your light infantry weakness while making your wraithknights capable of putting down heavy tanks at range.

It's debatable and very dependent on how prevalent they are in your local meta, but I am very concerned about this list's lack of anti-aircraft firepower, especially when you consider what is available to Eldar. The Crimson Hunter is lightly armored, but it provides some excellent firepower and maneuverability for a flier. It can bring four 8/2 shots, half of which have the lance rule. If you need to deal with heavy armor you can maneuver around to weaker arcs and choose not to skyfire or you can use it as an air superiority fighter, at which it excels. Vector dancer should allow it to position itself to fire and be in a position where other fighters would need to hover or be unable to shoot at it.

So that's my take on it. The ghost army can be a very durable army, but it suffers from most of the same problems that other similar armies deal with. Low model count can get into your head and an army that brings more models can dilute the quality of your shots to the point their volume makes your quality pointless. The original list is solid, but a few tweaks could bring it up a few notches and solve some of its inherent weaknesses.
Posted by Heretic at 12:00 PM