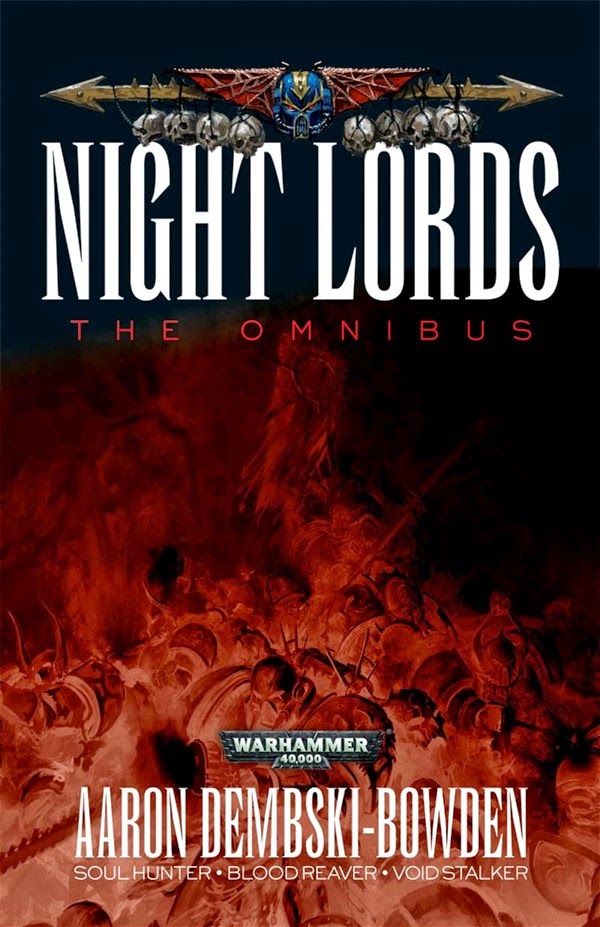 Greetings good people and welcome back! Trooper here with another installment of "Heresy in the Library", where I review Black Library publications and let you, the reader at the other end of the data-slate, know how it is! Up for review is the newly released omnibus for a not so new series. Night Lords: The Omnibus is Black Library's collection of the Night Lords series of books into one gigantic tome. There isn't much new, but for fans it will be a treat to revisit the prophet of the eighth legion. So sit back, grab some amasec, and enjoy my review of Night Lords: The Omnibus. 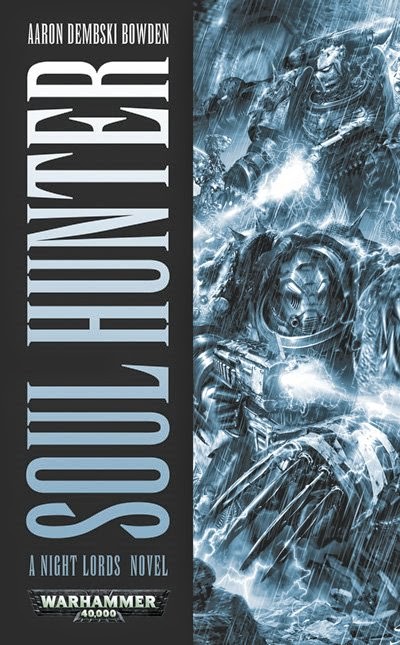 Black Library has kept on with their steady stream of releases. Long rumored, Night Lords: The Omnibus, is the Night Lords series by Aaron Dembski-Bowden collected into one huge (and I mean huge, the thing is a clunker) collection. In addition to Soul Hunter, Blood Reaver, and Void Stalker, the omnibus also includes several short stories related to the series, including Shadow Night, Throne of Lies, and The Core. Clocking in at a hefty 942 pages, the book itself screams VIII Legion. Wrapped in a blood red crimson and sporting the "bat-wings" that make the Night Lords so famous, the book is impressive for its size, but reading it will be a chore.

So what about the content? No doubt to explore this the viewer must be privy to the Night Lords trilogy of books by Aaron Dembski-Bowden (Hereby now referred to as ADB). I won't go into a huge amount of detail, as the story itself is fantastic enough to read on its own and requires no spoilers. But the omnibus is a collection, sans the audio-drama Throne of Lies (which is still presented in its story form here), of everything to do with ADB's take on the infamous VIII legion. Specifically, of Talos and 1st claw and their "adventures" as well as exploring the history and future of the Night Lords legion. See, prophecy, future, and fate play absolutely vital roles in the series. Talos, as an Astartes and as a son of Konrad Curze, is both blessed and cursed with the gift of prophecy and foresight, much like his father. 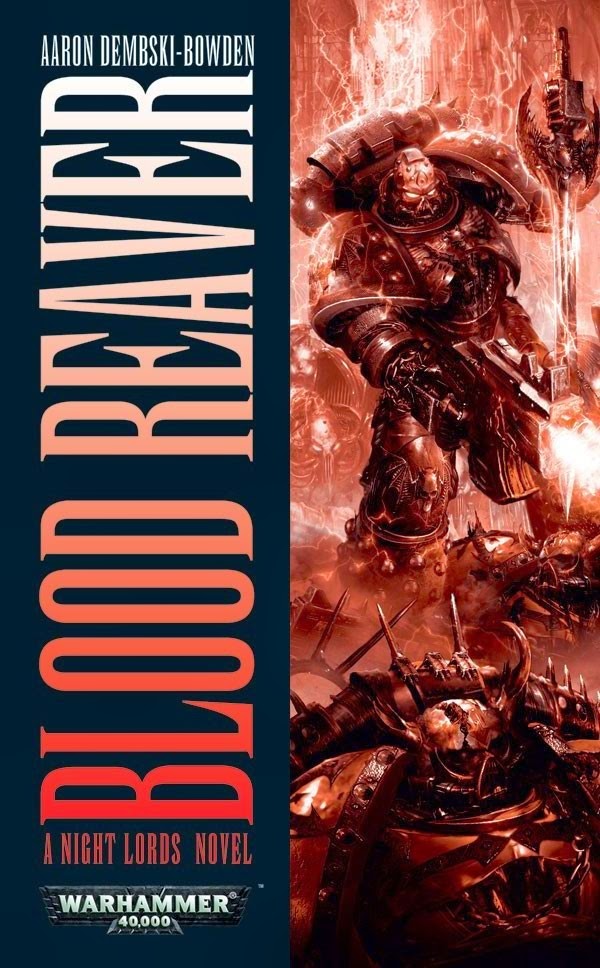 Perhaps, then, that is why this series has become so...endearing to 40k fans. Or, perhaps (and arguably more likely) is how absolutely excellent and well made the characters are. Even for Astartes, which traditionally (and up until the Horus Heresy series, absolutely true) have been very one dimensional or not very well developed, the Night Lords of 1st Claw are among some of the most entertaining characters I have read in any novel, even outside of 40k. The reasoning for this is because, unlike most other Astartes who were born, bred, trained, and live for nothing else other than warfare...the Night Lords home of Nostramo breeds nothing but scoundrels, rapers, thieves, murderers. Literally imagine the worst dregs of humanity and put them on a planet and now imagine that they develop a culture around it. This doesn't make a legion of psychopaths, however (although they are beyond number in the legion itself). What it does produce, however, is a "company of thieves", so to speak. They are brothers fighting a war many are perpetuating because they simply have nothing else to do. The legion doesn't worship the chaos gods, they follow no order, and they are almost devoid of any central leadership. 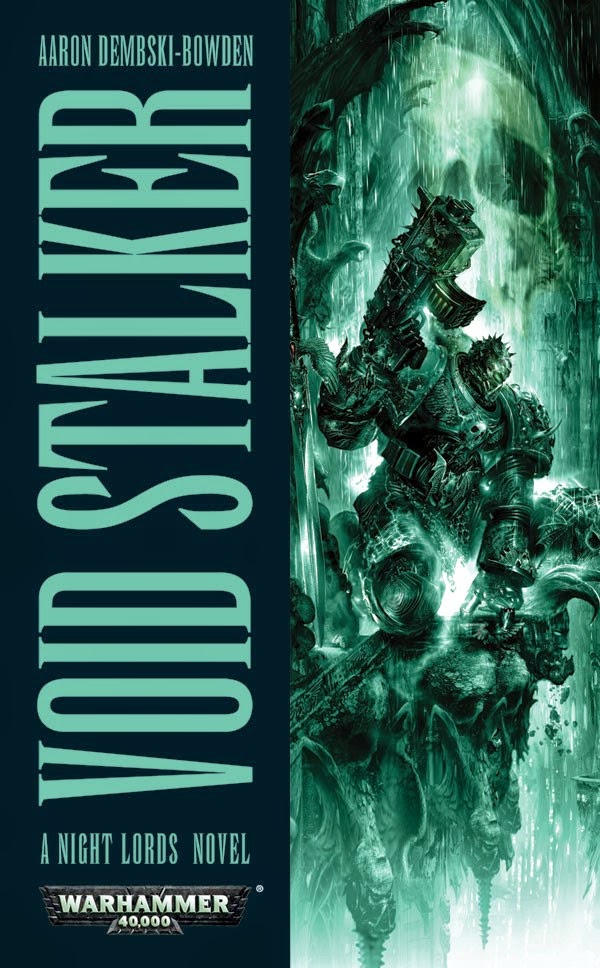 So in the end it is like watching a party of rogues who hate each other try and...survive...and it is so awesome to behold. ADB is my favorite Black Library author and in his writing it shows. He has gone to great lengths to bring 1st Claw alive and to showcase their talents, histories, and personalities. His other works are equally awesome (First Heretic being what I consider to be the best Horus Heresy novel), so if you get the chance, check his other stuff out.


So what do I think of Night Lords: The Omnibus? I found it to be a fun revisit to a series that I really rather enjoy. Collected in a huge book, it makes getting the series simpler and cheaper (buying the e-book from Black Library is $7.99 and you would have to do this three times. Just as well, you can't buy the trade paperback anymore). For the price of $17.50 you can collect every novel in the trilogy and all the short stories...which is pretty good in my book. However, if the idea of a huge tome containing all of this isn't appealing to you...then I would suggest scouring secondhand bookstores for trade paperback copies.

But for the price and for what you get...you can hardly go wrong.

P.S. If you enjoyed the series and enjoy the Night Lords...check out the book Lord of the Night by Simon Spurrier. You can consider that book a direct precursor to this series. 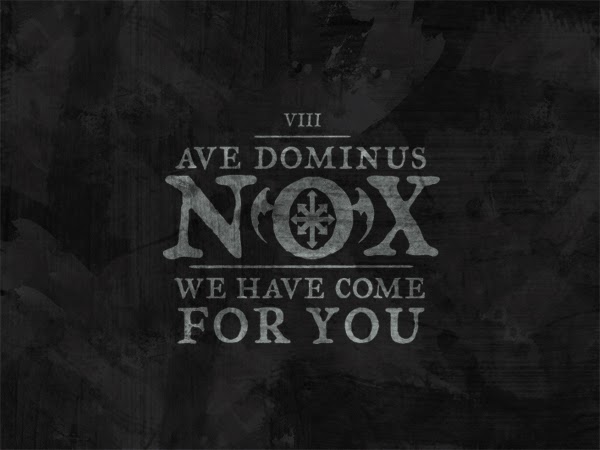 (Credit for the cool end picture goes to Char Lozinski. From this link!