In regards to the better half of the Armada starter, I’m Warmaster Havok and I’m here to give my thoughts on the Imperial side. As per the standard of any of the Star Wars stuff, I picked up all of the Imperial sides of the two starters that Corvus and I picked up because there is little that is more satisfying than destroying Corvus' Rebel scum when ever they poke their heads out of what ever hole they are hiding in.


So, first off we have the one ship that came with the starter, the Victory Class Star Destroyer. Which, despite appearances, is not the iconic Star Destroyer from the original movies (that would be the Imperial Class Star Destroyer. Very similar aesthetic but about 10~20% bigger). It, like every other ship, comes in two variations; The Victory I and the Victory II. The two variants both roll the same number of dice from and have the same stats on every facing. The Victory template throws 6 dice in the front arc, 3 of its two colours; 3 dice on each side, 2 red and 1 of the other color, and 2 red from its rear arc. That is a staggering amount of dice considering that the side arc will throw just as many dice as the front arc of either of the two Rebel ships. The only differences between the two being the color of dice that are thrown and cost. The Victory I ends up being the the cheaper of the two at 73 points and throws both red and black dice as opposed to the Victory II which costs 85 points and throws blue dice. The Victory I is the less versatile of the two for the sole reason that those black dice require you to get into the close firing band in order to fire with all of your dice. That isn’t necessarily a bad thing though, because when you do get into range you are going to put through some serious pain onto the poorly shielded rebel ships. One blast from this ship coupled with the combination of the Dominator title, which allows you to use up to 2 shields from any hull zones as blue dice, and focus fire, which adds one dice of all available kinds to your pool, can and has taken down many a Rebel ship. In doing so, you open yourself up to being able to be flanked and out maneuvered, so It is high risk/ high reward. That risk is why I believe this ship should never be run  in multiples. It tends to be a strategy that works well in the short term but if you keep trying to use that strategy it removes the Imperial advantage of the high engineering value that lets you out last the Rebels. Which is why I would recommend if you want to run this variant only running one with the back up of the Victory II.

Now that we’re on the subject of the Victory II, it is something that you should never leave home without (starter box only). It’s primary advantage over the Victory I is it throws blue dice instead of black dice. While the black dice are much more kill-y than the blue dice, the blue dice have the handy feature of having the lock out ability. This ability allows you to tell the opponent's ships that they can’t use one of their defense tokens, which is really handy when trying to focus down a ship quickly. That’s not the best part of the blue vs the black, the blue dice will throw at the medium range band so you can sit back and slowly cruise around the galaxy shooting Rebel scum as they pop out of the woodwork. But to put that into a strategy sense, they tend to do best going slow and steady in order to get as many turns of firing with their front arc as possible and making it harder for the rebels to get behind to your sweet, vulnerable booty. 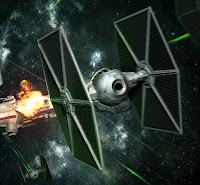 Last on this articles agenda is the TIE Fighter. Personally, I hate the shit out of the TIEs in Armada, but I will be the first to admit this is personal bias backed up by terrible dice with them. They do fill a very important role in this game, to be a speed bump. They are 8 pts a model as opposed to the X-Wings 13pts, they 3 blue dice compared to 4 from the X, 3 hull to 5 hull points, has the swarm rule; which lets you reroll a dice when attacking a squadron that is already engaged by another of your squadrons (real nice) compared to the bomber; lets them crit ships and escort; which says if you must shoot a ship with escort before shooting other ships, and throws a blue dice as compared to the red dice from the X. So, realistically all the TIE is in the starter box for is to try and reduce the number of X’s that get to shoot at your ships.

So, I hope you enjoyed my first soiree into the wonderful world of the Rights of Battle blogging world. You can expect more articles from me in the coming months, and I hope you’ll join me next time when I go into detail about the Fleet Admirals from both the starter box and the Wave 1 ships.
Posted by Warmaster Havok at 4:32 PM