Heresy in the Library - Vengeful Spirit 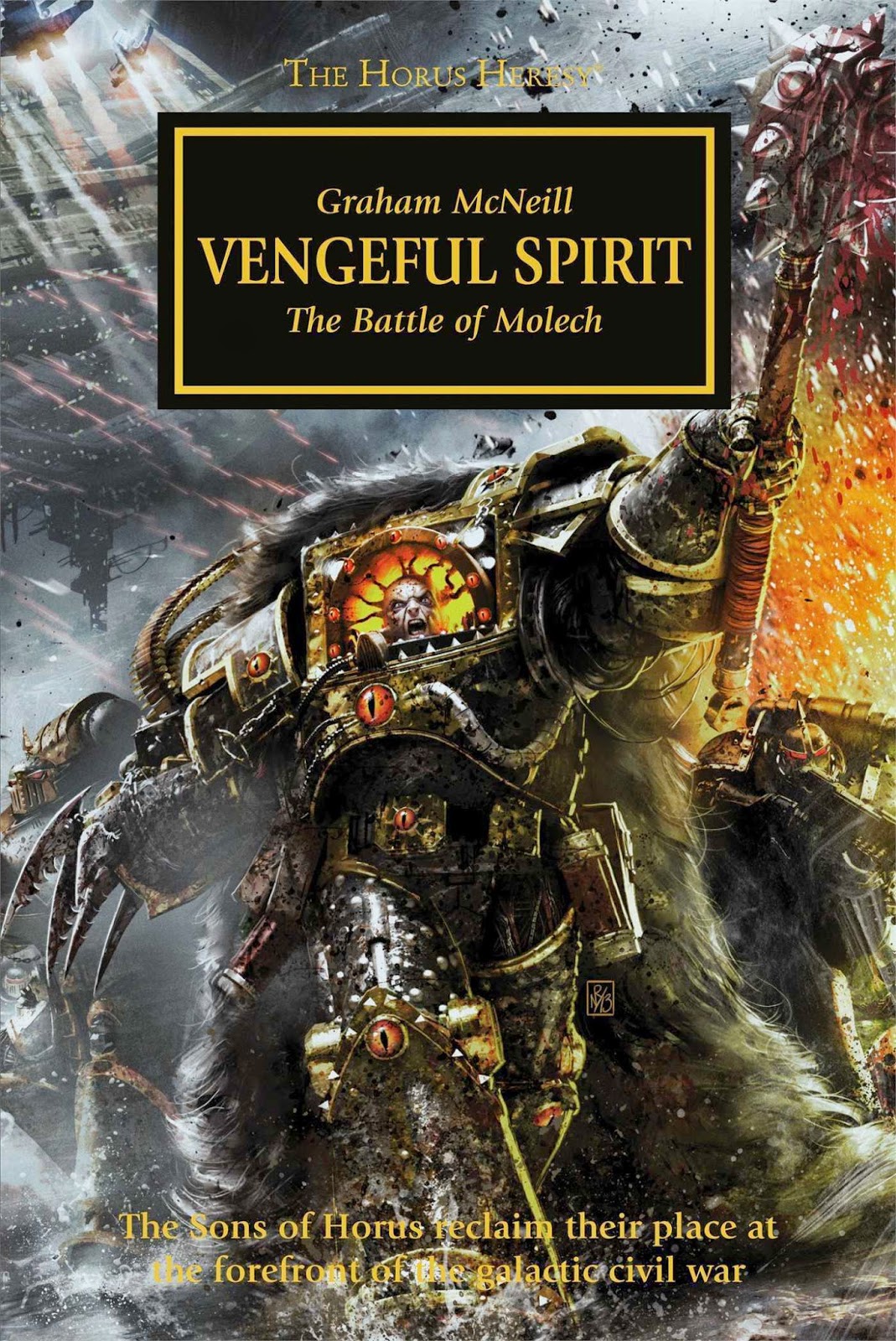 Greetings good people and welcome back! Trooper here with another installment of "Heresy in the Library", where I review Black Library publications and let you, the reader at the other end of the data-slate, know how it is! Up for review is the newest Horus Heresy full length novel Vengeful Spirit. In it we revisit the Sons of Horus legion about midway through the Horus Heresy itself. Horus himself returns in full swing and some interesting, albeit "old" side plots open up throughout the novel. Ultimately the Battle of Molech, which the book details, comes out to be apocalyptic and fun as we could expect. So sit back, grab some amasec, and enjoy my review of the Vengeful Spirit.

First off, readers, let me apologize for my absence the past few weeks. Normally I am much more productive in my reading and writing but I have been in a slump with 40k. However, I have occupied my time with a few games (a few out of the very nice and impressive Astra Militarum codex come to mind) and found time to read the new Horus Heresy release.

The return of Horus is a welcome change to the series which has seen so many other Primarch's take center stage and get their own books. Guilliman has gotten several books and shorts at this point, as well as Fulgrim, Perturabo, and even Angron. The Unremembered Empire has a staggering five Primarchs in attendance. At this point it is fair to ask, "What has Horus and his lot been up to in the past few years?" 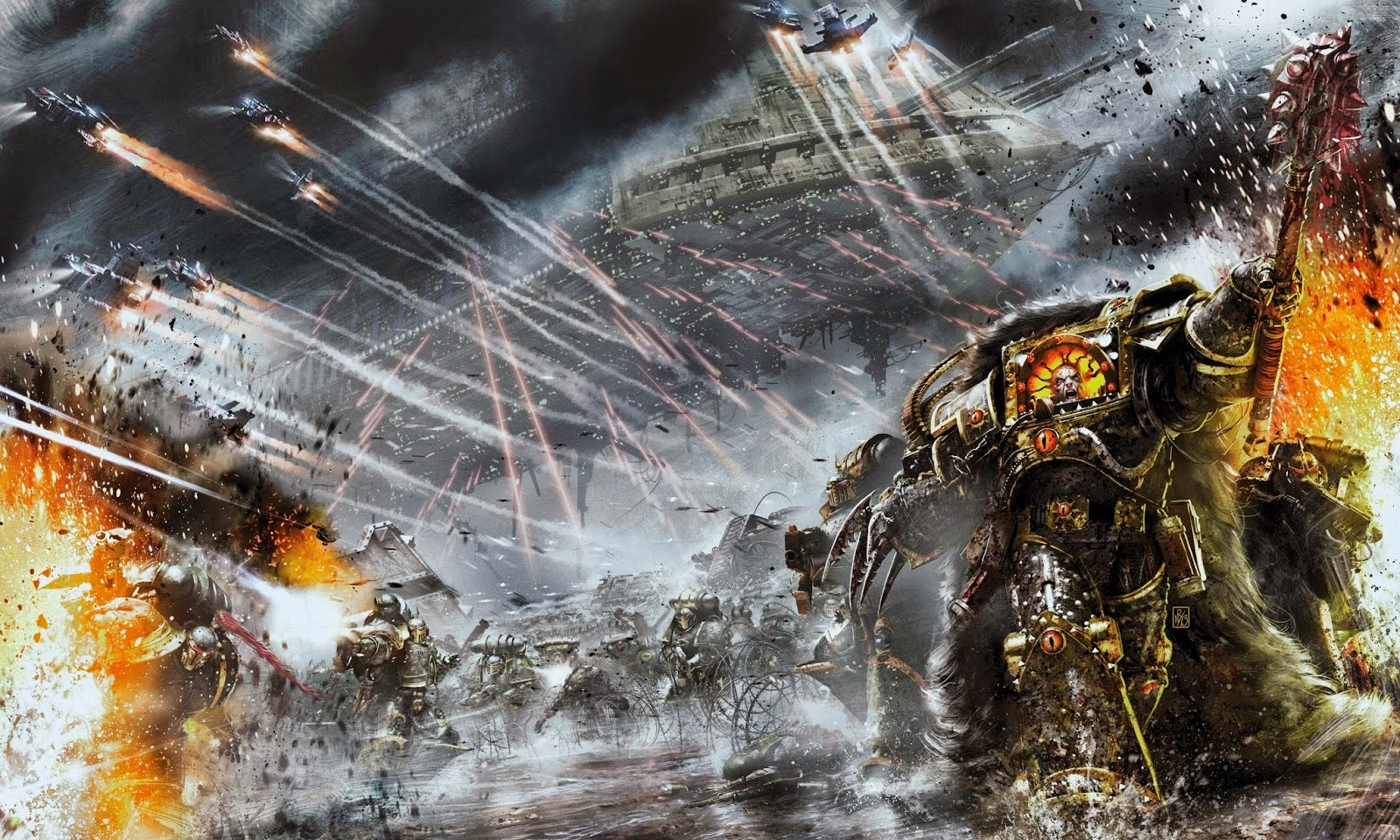 When we revisit Horus, him and his Legion have fallen quite far from their noble countenance in the first three books of the series. Horus, of course, has been glimpsed briefly in multiple books, but never again has been explored since then. He has grown much darker, but the kind of megalomaniac dark that might be glimpsed in a criminal studies class. His legion, likewise, has grown dark and chaotic, keeping military structure more from tradition than from logistic. Numerous warbands are now led forth in assaults, their armor adorned with the eight pointed star of Chaos. Maloghurst now leads the Legion is the summoning of possessed Chaos Marines (which act like the Possessed Chaos Marines most of us known as opposed to the "cult" kind seen in the Word Bearers). The Imperial Army regiments assigned to the Warmaster, likewise, have devolved into cult troops. Because of this, the Warmaster is seeking glory on battlegrounds that leave his troops mauled and butchered by the Loyalist forces. The last bought of fighting at the start of the books shows that the Legion, while growing ferocious, is also growing sloppy. The Warmaster is wounded by a hidden gunship. Because of this, he accelerates his plans to head towards the planet of Molech.

Why Molech you ask? Because the Emperor hid something so valuable there that billions of Imperial Army Troops, hundreds of Ultramarines and Blood Angels, and a full Titan Legion and multiple Knight households have to guard it. That's right, the Emperor left another Perpetual to help guard his secret and then, in a display of horrible power, erased the minds of Fulgrim, Perturabo, and Horus. And then there is Knight House Devine, first referenced in an old Epic publication and more recently in The Devine Adoratrice (From the Imperial Truth Collection), get spotlight as the rulers and eventual Chaos traitors of the planet. Spoiler alert, Slaanesh gets to them first.

The final sub-plot, and one that I am particularly fond of, is the one featuring a back in action Garviel Loken and the Knights Errant and their mission to track and mark the Vengeful Spirit for Leman Russ so that he can make his assault on the Warmaster. It is literally the most spec ops of spec ops missions. However, despite the suicidal nature of the mission, the Knights Errant themselves are one of the most enjoyable studies in Legion bantering to ever have been presented so far in the series. So the joke is...what happens when a World Eater, three Sons of Horus, an Ultramarine, an Emperor's Children, an Iron Hand, a Space Wolf, a Raven Guard, and a White Scar have to cross half the galaxy to fuck with the most dangerous ship in the universe? 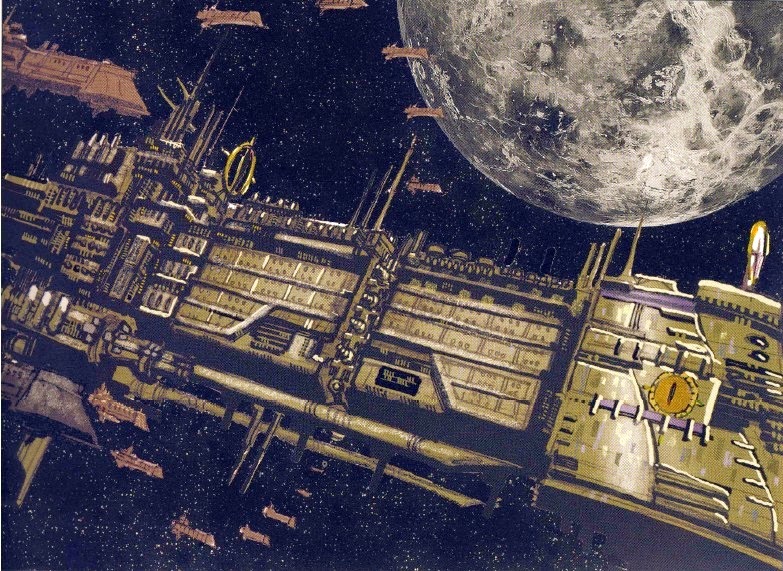 They make fun of each other. It really is quite enjoyable. And even in the bowels of the ship as the plot progresses they only become more enjoyable. The real story to this is Loken coming to terms with the Horus Heresy, culminating in what I can only describe as the biggest fuck you to daddy ever conceived. It makes for a good read.

The Battle for Molech is apocalyptic in scale and has a lot of moving pieces. I won't spoil some of the better parts because I believe this is worth the read. I do have some favorites though, such as the Red Angel making a reappearance (with Blood Angels on the planet this makes for an enjoyable interaction), House Devine's fall to Slaanesh, and a scene of a Warlord Titan dying which reminded me of fonds memories from the last Apocalypse game I played up at the Wizard's Keep...

So what do I think of the Vengeful Spirit? For the most part, I enjoyed it. I enjoyed seeing Horus back in action and at the forefront. I really enjoyed the sections with the Knights Errant and the details of the Battle of Molech. The sheer destruction wrought by having two Legions (Sons of Horus and Death Guard) descend on a planet is heavy to say the least. Mortarion's continued dive down into Chaos is all but cemented by the arrival of Grulgor, the first Plague Marine, who destroys the Legion's entire stock of gene seed.

And the secret the Emperor hid from everyone's eyes? Well, there is a surprise that I was pleased with. It is a change from the norm and made for a rather fitting conclusion and an awesome setup for the rest of the series.

I hope, anyway. For the cool setup though I have some major issues with the novel. There is ANOTHER Perpetual, which I am pretty done with. The series is becoming increasingly reliant on the Perpetuals to move the plot along and, at times, act as weird Deus Ex Machinas. To be honest, I am kind of sick of them. The idea was novel for one or two and even the side-story in Betrayer (which suggests where Perpetuals come from), but past this point I am just...done with them. The mood has been ruined. And sadly, they will continue to drive the plot to the point where the series will become increasingly reliant on them.

The other issue is that Black Library increased the price for the hardback book from $30 to $40, which I have a huge issue with. Normally I enjoy having the physical copy, but there is no way I am going to sink $40 for a book that I don't honestly think is worth that much. If the trend continues I foresee myself going strictly e-book in order to save money. I suppose it makes it easier to read, especially if I am somewhere where a book might get me in trouble (I.E. work) or might be space restrictive. But it is annoying that I have a huge collection of Black Library publications and don't feel justified in purchasing more.

Just...with everything going on at GW I am really, really leery about future publications. I always try to remain optimistic, but I'm pretty burned out right now.But Vengeful Spirit is, at the very least, a breath of fresh air into a series that I was beginning to get more leery with. Scars was really good and I was excited for this and, for the most part, I am pretty satisfied. So if you have $15 for the e-book or $40 for the hardback I say go for it. You won't be disappointed.

This is Trooper, signing off.
Posted by Trooper at 11:00 AM