Bang for your Buck 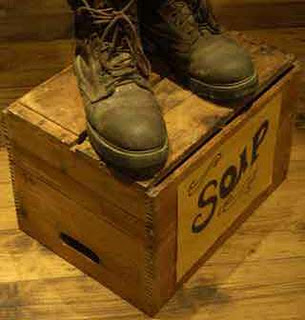 Hey guys.  Today I thought I'd brush off the old soap box and do a little preaching.  I promise to keep the religious zealotry I possess (... ha ha) to a minimum and keep on preaching about the use of points.  As I've said before, I'm not one for buying units into may army without putting a little something in them to make them worth the initial cost.  I won't say that this is the "only" way to do it, nor always the best idea.  But, I guess it's worked for me in the past.

So the theory here is to look at your list and apply some more thought to it.  Of course there is a mentality that can go with it such as building an army of Swiss Army Knife units that are suite to take on just about any target (the established "Marine" style) vs building several units , each with their own specific use and ability set (the established "Xenos" style).  This is a discussion for a different day, but it can come up here.  So how does spending points come into play?


In both of the styles mentioned above, units can stand to gain from adding additional wargear to bolster their ability on the table.  This directly works against the MSU builds which generally run a lot of redundant small units with little to no wargear purchases in the hopes that a large number of targets will provide high fire rates, larger target opportunities, and a feeling of security in that even if you lose one toy, you still have several to cover that loss.  These MSU lists are very forgiving, and for the most part make up a large portion of the internet meta out there.  This is more than likely for good reason, but I'll try to voice the other side of things.

I like to spend some extra points on units beyond just putting them on the field.  This can often make them a little more expensive, and will usually keep your list a little smaller; both a pro and a con as it is easier to manage and keep units active... but the losses hurt a little more than MSU builds.  For example.  If I were to run a Land Raider Crusader (lets say out of the standard Space Marine codex for the sake of basic comparison), I would buy the Multi-Melta because... well, lets face it.. its good.  I am the kind of guy who looks a this and says, this is a 260 point investment.  For 15 points more, I can run Extra Armor, and really make it good at what it does.  Now, this 15 point investment is the point of contention for a lot.

Some will say that spending more points on something that is already that expensive isn't smart since it is more points used up that other units can't take advantage of.  I don't disagree with their line of reason, but I am for spending those extra points for a few reasons, but the biggest reason is the "Bang for your Buck" idea.  I am spending 260 points regardless.  By comparison the 15 extra points is relatively small for a piece of wargear that allows it to do it's job.  To me, this cost is a very straight forward cost which is spent to bolster a very specific (Xenos style) as it makes the tank emphasize it's use as a transport.

Alternatively, a cost that could be used make a unit more rounded tactically (Marine style) is the addition of melee weapons to units that generally shoot.  The addition of something like an agonizer to Dark Eldar Warriors, or a Power Weapon in Guardsmen squads allow them a little prowess in melee, though the rest of their ability lies in ranged firepower.  A bigger example would be the adding of a Power Fist to Tactical Squads to allow them some good anti-mech in close quarters.  While these costs don't help the unit any more able it's their element, they allow them to serve a little more fluid role on the battlefield.

So what works better?  Truth be told, I don't think either is a "better" answer.  I personally think its a testament to the game of 40k overall in that it allows for multiple styles over the span of several armies.  As much as we like to complain that Games Workshop's inability to create a balanced medium for us to play in, I'd have to say this was at least something they got right in terms of allowing options to us players.

Is it more applicable to spend more points on units, or just spend the minimum points to through the basics on the board in larger scales.  I feel like this is an answer that changes from army to army, like spending more points on your units is a good mentality for MEQ's out there just because they have a pretty expensive base cost.  Like the Land Raider, spending more points on these units is a little easier to swallow just because you are already spending more points just to field them.  Oppositely, armies like Tyranids may just want to throw out a high number of low cost units with no real upgrades.  These armies allow for high count units to hit the table, so spending more points per may be less appealing than fielding more models.  The enemy can field all the high powered shots they want, but answering a 160+ bodies is hard no matter what you are.  Of course any codex can manage either style fairly well.

I think this mechanic is something that is very rarely discusses and people may just feel that spending points is either worthless or the unit is worthless without spending the points.  Is there a good mix of doing both?  Or is it possible that these questions are indeed answered by the codex being played?  I don't have an answer, but it's a nice change of pace to be able to say well done G.W.  You made a balanced mechanic without a really one-sided answer.

What do you think?  I'd be interested to see what your thoughts are, or maybe even suggestions or examples of how you go about this situation.  I'm sure we all approach it differently, but I'd love to see how people do things differently than I.